Cal State U. Sacramento President is a Knight of Malta 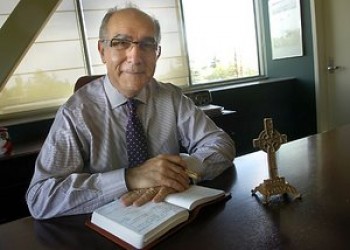 The Order of Malta

The Order of Malta is the common name for The Federal Association of the Sovereign Military Hospitaller Order of St. John of Jerusalem of Rhodes and of Malta. It is a lay religious order of the Catholic Church, founded in 1099. According to its Web site (www.smom.org), there are about 12,500 Knights and Dames of Malta worldwide. To become a member, applicants:

* Must be Catholic lay men or women in good standing with the church
* Must be at least 25 years old
* Should be regarded as leaders in their fields and in the community
Must have a record of service to the Catholic Church and hands-on volunteer service to the poor
* Must be sponsored by two members of the knighthood
* Must participate in a year of formation, which includes meetings and volunteer activities
* Must pay an initiation fee of $3,500, part of which goes toward international relief programs

In "Indiana Jones and the Last Crusade," in order to save his father (Sean Connery) from a gunshot wound, the title character (Harrison Ford) must choose the correct chalice used by Jesus Christ on the eve of his crucifixion.

The task is challenging because many potential Holy Grails rest in a chamber guarded for centuries by a medieval knight.

Knights in the Middle Ages served in a variety of roles -- as military support to kings, lords and religious leaders -- and as defenders of their faith.

Usually sons of aristocrats, the future knights were sent to other families at about age 8 to be raised without a lenient parent to spoil them. In their midteens, the boys became squires, assisting other knights, before attaining knighthood in early adulthood.

Although there are no knights in shining armor sitting around King Arthur's round table today, knights remain active in the Catholic Church. The Knights of Columbus, for instance, were founded 125 years ago and exist in many parishes to help raise funds for needy individuals and families.

Ham Shirvani, president of California State University, Stanislaus, is a modern-day knight. He's a member of the Holy Sepulchre group and a provisional knight for the Malta fellowship. He carries no sword and rides no steed, but his mission otherwise is much unchanged from those performed centuries ago.

"Obviously, there are no military components to the order anymore. The
promotion of the faith is not by the sword," said Monsignor Jim Kidder, pastor of the Holy Trinity parish in El Dorado Hills and chaplain to the two orders in the Sacramento diocese. "The mission hasn't changed. From the beginning, it was taking care of the sick and nurturing and promoting the faith."

There aren't many knights from the two orders in the area, he added -- about 25 in the Sacramento diocese, which numbers roughly 600,000 Catholics. No one is quite sure how many exist in the Stockton diocese, which has about half that many Catholics on its rolls.

"I haven't met anyone yet from Stanislaus County," Shirvani said. "Most of the activities are in San Francisco or Palo Alto. But I've heard there are people in Stockton and Fresno. I'll be interested to meet them."

As part of his provisional training, Shirvani traveled last month to Lourdes, France, where he helped people with physical and mental ailments get to various sites for healing. Following the claims that Jesus' mother, Mary, appeared to a peasant girl and others in 1858, Lourdes has become a major place of Catholic pilgrimage and reported divine healings.

"We put the people in something like a wheelchair, but it's much larger," he said. "One person pulls on it and one pushes it. Lourdes has a bunch of hills and slopes, so it's up and down. We take them either to the grotto or the main church or a variety of religious places where Masses take place.

"It's all about spirituality and service. I was sometimes pulling, sometimes pushing. It's an incredible experience. While you are there in that holy place, you are also serving.

"I've fulfilled my mission of taking a person who couldn't afford to go to Lourdes and have that holy water and ask to be healed."

From Iran to England

Shirvani's journey to knighthood began when he was a boy. Born in Tehran, Iran, in 1950, to a Catholic family, his early education was in Catholic schools.

"There is a perception that everyone in Iran is Muslim, but that is untrue," he said. "During the Shah's reign, there were several minority groups -- Christians, Jews, Zoroastrians -- the original religion of Persians -- and Baha'is. There were several French and English Catholic schools in Tehran. You could find Muslim and Jewish students there, too. They were quality institutions."

Like knights centuries earlier, Shirvani was sent from his home at age 11. His parents sent him to a Catholic boarding school in London.
"My mother, mostly, but also my father, believed that most of your values get formed in your teens," he said. "If they sent me to England, I would be brought up with Western, particularly English, values. Basically, the Catholic faith was the major part of it. In Iran, even though you had Catholic schools, the broader environment wasn't embracing Catholic values.

"My parents debated. My mother wanted to send me to Dublin; my father was more concerned about the educational system. I went to Saint Augustine Academy in London from age 11 until
age 17.

"I truly enjoyed it. The first three months were hell, because you're in a completely new environment. Although we were taught French and English, we still had language problems. And then, of course, there were no parents (to nurture you). But after six months, I was as happy a camper as you could get. There were wonderful Irish nuns there who acted as a second mother. It was a small school and a wonderful environment. There was a lot to learn, and I gained a lot of support."

Shirvani said he's always had a strong faith. "I do believe strongly in the Lord," he said. "It's mostly spiritual within yourself. My brother is not like that, and we grew up in the same family.

"Being faithful is a very important aspect of daily life. The Lord said it beautifully: 'I am with you.' What he means is that 'I'm inside you; I'm also in infinity -- out there.' To me, the spirit connects the soul to the body, so if you are faithful, it helps you get a strength and make your contributions and be committed to your work.

"Everything is a privilege, not a right. When they give you a privilege to serve, you really have to deliver. You can't just sit back and take advantage of it. As much as possible, you have to help as many people as you can."
That attitude led to his 2007 award by the statewide CSU student organization as president of the year. It's also what led him to become a knight
.

Shirvani is aware that knights are linked to the Crusades, which today are often viewed as a time of murder and religious intolerance, especially against Islam.

"Religion has been abused by power-hungry people," he said. "You cannot punish the religion or lose your faith because of it."

As a secular college president, Shirvani has been criticized for his religious views. In 2007, he wrote an opinion piece on spirituality and college students for The Bee and concluded, "Each of us addresses the spiritual dimension of our lives -- or lack thereof -- as we decide how to interpret and interact with the world. For the academy to ignore this component of critical thinking is to fail to serve our students as they prepare for life. To fail to do so puts at risk the state of our nation's soul."

He said he received quick negative responses from "a couple" of CSUS professors. He also was dinged by a Bee letter writer who questioned the use of the CSUS campus to host a Christian event last summer, the Greg Laurie Harvest Crusade.

"I try to separate religion from my job, because religion to me is a very personal thing," Shirvani said. "I usually try to be private about it. I do have a crucifix in my office. I think that's a personal right.

"It's a beautiful part of the Western democracy, that religion has always been part of individual life."

For him, that includes knighthood, which combines financial donations and hands-on work.

"It's a very time-demanding and personally involved organization of lay people," said Kidder. "They spend a lot of time and give a lot of themselves in terms of working with the sick and promoting the faith."

Shirvani said he enjoys the work. "One of the biggest joys above and beyond giving and helping is the joy of being with other people who believe in the same cause, engaged in conversations with them and listening to them," he said. "In most meetings, there are usually people saying, 'We need to fix this; we have a problem there.' In these groups, people are saying, 'What can we do to help?'

"(The Knights of the Holy Sepulchre) was established in 1099 to protect Jerusalem and care for the needy. Now they help older Christians living in the entire area, whether Palestine or Israel. They help the churches there and raise money for education."

As a provisional Knight of Malta -- he expects to become a full knight within the next year -- Shirvani has financial obligations as well as meetings and work.

"There are similarities, but Knights of Malta have as their major goal people who are sick or in the hospital, and the protection of the Catholic faith," Shirvani said. "Besides the gatherings during the year, I am required to do certain community service work, literally going and helping the sick and poor, trying to do whatever I can. It's extremely humbling."

When he's not running the university or spending time as a knight, Shirvani can be found with Fathmeh, his wife of nearly six years, in the home he designed -- he holds degrees in architecture, urban planning and landscape architecture, as well as a master's of science degree. He and his wife both enjoy cooking, Shirvani said.

A member of Sacred Heart parish in Turlock, he attended St. Joseph's Catholic Church in Modesto when he first moved to the area, and said he "can't wait" for the new St. Stanislaus church on Maze Boulevard to open later this year.

"Architecturally, it's really magnificent," he said.