" ... It goes without saying that Mr. Prager is an adamant supporter of President George W. Bush, [and] often describes him as 'great.' ... Mr. Prager went even further on his radio talk show declaring that our current President Bush 'was chosen through the direct intervention of God' ... " 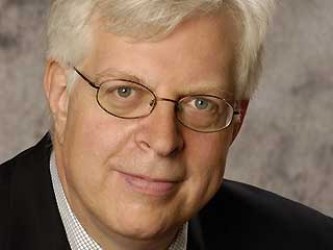 Prager is an ultra-con talk show host whose "opinions" are straight out of the CIA black propaganda chit-sheets. If there is a CIA operation afoot, especially one that involves mind control, he is right there, blowing smoke with the most maddeningly illogical arguments ever heard from the media. For years, Prager worked for ABC/Cap Cities, a key CIA Mockingbird outlet/mass mind control front. Yes, he is Jewish, but it his intelligence role that matters, not his religion. If he was Catholic - like most of those at Cap Cities - now owned by Disney (named for a famed Nazi/CIA-FBI collaborator), Prager would be no less a fascist prig who warps minds and facilitates CIA atrocities with his "conservative" moonshine.

Prager prides himself on his "logic" - and often touts his own books on the air, as if they are Socratic works of philosophy, makes a great show of his intellectual "prowess" - which closely resembles fascist sophistry: " ... Islamist groups calling themselves Muslim civil liberties groups and various Western organizations repeatedly declare that Islamophobia is racism. Of course, some may argue that whereas conservatism and liberalism are ideas, Islam is a religion, and while one can attack ideas, one must not attack religions. It is, however, quite insulting to religions to deny that they are ideas. ... " Sure-sure ...

Dennis Prager has written an expressly racist anti-Muslim op-ed in the Los Angeles Times, and Juan Cole has deftly shredded it. I've have only one question for the Los Angeles Times, which is where do they get the nerve to print such racist drivel. If Prager had been writing in the 1950's, his equivalent article on civil rights would have been called 'Five questions non-Negros would like answered'. The answer to my question to the Times is that anti-Muslim racism is invisible to Americans. You can write whatever you want about Muslims, make whatever generalizations you want, and make whatever factual misstatements (i. e., lies) you want, and no one will notice what you are really up to. The United States has done a fairly good job at dealing with the intellectual basis of its traditional anti-Black racism (but not such a good job in the practicalities, as seen in the aftermath of Katrina), but has simply replaced underlying anti-Black racism with underlying anti-Muslim racism. The underlying assumptions explain why Prager can get away with such an outrageous op-ed.

Prager's op-ed fits into the pattern of Zionist propaganda which completely dominates the American media. The general idea is that Muslims are uniquely ill-suited to govern themselves, and therefore it is perfectly acceptable to deny them the national sovereignty in places like Iraq and Syria that everybody else has as a matter of course, and perfectly acceptable for Israel to deny the Palestinians the nationhood that every other people in the world is entitled to have. The idea is that 'non-Muslims' regrettably have to treat Muslims differently because of some weird and unique failing in Muslims themselves, which is presumably some sort of brain damage you catch from reading the Koran (as I can think of no other similarity that Muslims around the world have that would require them to all be treated like children). We've recently seen some spectacular examples of this Zionist propaganda in articles by Pipes, Boot and Steyn, all ridiculously trying to shoe-horn the French riots into their understanding that the West is in the middle of an attack by Islam. Prager is just another of the same bunch, pretending to innocently ask questions while really forming another part of the general Zionist propaganda war required for Israel and the United States to do the things they are doing to Muslims in the Middle East. Prager is an out-and-out racist, and its high time Americans started to notice it and complain about it.

"Mr. Prager is an activist, advocate, and a partisan of the conservative Republican party. He openly attacks the so-called leftist liberals that include universities, trial lawyers, labor unions, the ACLU, Civil Rights groups, large newspapers and television networks, and so on. He is also against all those that do not see the unique positive historical effect that the so-called Judeo-Christian tradition has had upon America and the world, of institutions like the Presbyterian Church (USA), the National Council of Churches, or the Anti-Defamation League.

"Mr. Prager consider America as having some sort of 'moral superiority' in the world (through the so-called "American exceptionalism" doctrine) which, according to him and others, entitles the United States not be constrained by international laws or by the United Nations in pursuit of its goals. ... Based on this rationale of America's 'moral superiority,' Mr. Prager is an enthusiastic supporter of the United States' initiative in the War in Iraq, which he characterizes as another example of the US nobility. ... "

The CIA, ABC and the Rise of Rush Limbaugh

2003 Introduction to “The Seizing of the American Broadcasting Company”