On a farm deep in the countryside 100 miles (160km) west from Sao Paulo, a football team has lined up for a commemorative photograph. What makes the image extraordinary is the symbol on the team's flag - a swastika.

The picture probably dates from some time in the 1930s, after the Nazi Party's rise to power in Germany - but this was on the other side of the world.

"Nothing explained the presence of a swastika here," says Jose Ricardo Rosa Maciel, former rancher at the remote Cruzeiro do Sul farm near Campina do Monte Alegre, who stumbled across the photograph one day.

But this was actually his second puzzling discovery. The first occurred in the pigsty.

"One day the pigs broke a wall and escaped into the field," he says. "I noticed the bricks that had fallen. I thought I was hallucinating." 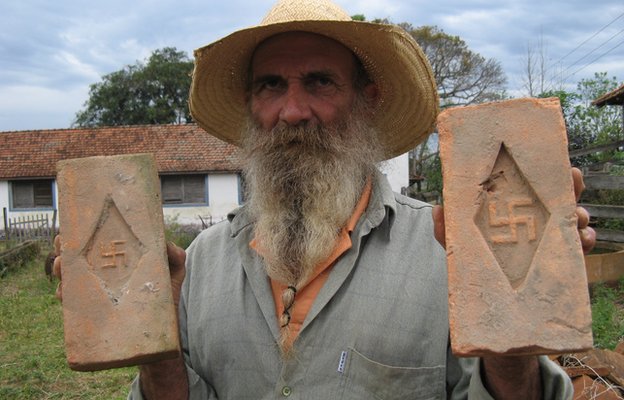 The underside of each brick was stamped with the swastika.

It's well known that pre-war Brazil had strong links with Nazi Germany - the two were economic partners and Brazil had the biggest fascist party outside Europe, with more than 40,000 members.

But it was years before Maciel - thanks to detective work by history professor Sidney Aguilar Filho - learned the grim story of his farm's links to Brazil's fascists.

Filho established that the farm had once been owned by the Rocha Mirandas, a family of wealthy industrialists from Rio de Janeiro. Three of them - father Renato and two of his sons, Otavio and Osvaldo - were members of the Acao Integralista Brasileira, an extreme right-wing organisation, sympathetic to the Nazis.

The family sometimes held rallies on the farm, hosting thousands of the organisation's members. But it was also a brutal work-camp for abandoned - and non-white - children. 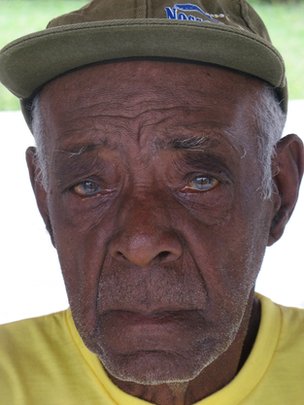 Osvaldo Rocha Miranda applied to be a guardian of the orphans, according to documents discovered by Filho, and a legal decree was granted.

"He sent his driver, who put us in a corner," says 90-year-old Aloysio da Silva, one of the first orphans conscripted to work on the farm.

"He promised the world - that we would play football, go horse-riding. But there wasn't any of this. The 10 of us were given hoes to clear the weeds and clean up the farm. I was tricked."

The children were subject to regular beatings with a palmatoria, a wooden paddle with holes designed to reduce air resistance and increase pain. They were addressed not by their name, but by a number - Silva's was number 23. Guard dogs ensured they stayed in line.

"One was called Poison, the male, and the female was called Trust," says Silva, who still lives in the area. "I try to avoid talking about it." 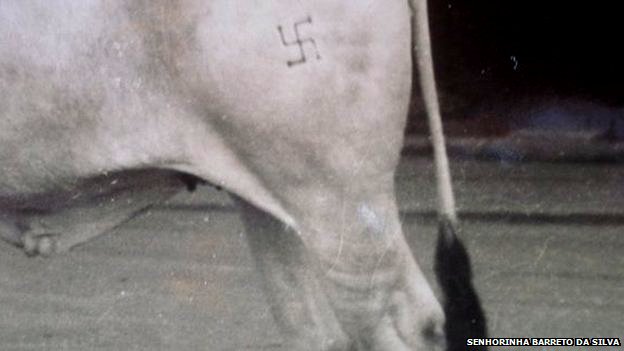 Even the cattle on the farm were branded with a swastika

Argemiro dos Santos is another survivor. As a boy, he had been found on the streets and taken to an orphanage. Then Rocha Miranda came for him.

"They didn't like black people at all," says Santos, now 89.

"There was punishment, from not giving us food to the palmatoria. It hurt a lot. Two hits sometimes. The most would be five because a person couldn't stand it.

"There were photographs of Hitler and you were compelled to salute. I didn't understand any of it."

Maurice Rocha Miranda, great-nephew of Otavio and Osvaldo, also denies that the children on the farm were kept as "slaves".

He told the Folha de Sao Paulo newspaperthat the orphans on the farm "had to be controlled, but were never punished or enslaved".

But Filho believes the survivors' stories. And despite it being a long time ago, both Silva and Santos - who have never met since - tell very similar, harrowing tales. 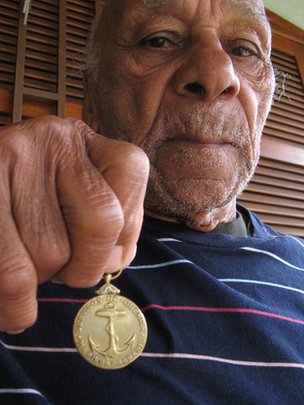 Santos with his war medal

The orphans' only respite came in football matches against teams of local farm workers such as the one pictured in the photograph with the swastika flag. Football was key to the ideology of the integralistas. Military parades took place at the Vasco da Gama football ground and the game was regularly used for propaganda purposes under Brazil's dictator, Getulio Vargas.

"We'd have a kick around and it evolved," he says. "We had a championship - we were good at football. There was no problem."

But after several years, Santos had had enough.

Santos returned to Rio where, aged 14, he slept rough and worked as a newspaper seller. Then in 1942, after Brazil declared war on Germany, he joined the navy as a taifeiro, waiting on tables and washing up.

He had gone from working for Nazis, to fighting them.

"I was just fulfilling what Brazil needed to do," says Santos. "I couldn't have hate for Hitler - I didn't know the guy! I didn't know who he was."

Santos went on patrol in Europe and then spent much of World War Two working on ships hunting submarines off the Brazilian coast.

Today Santos is known locally by his nickname Marujo - "sailor" - and proudly shows off a certificate and medal that recognises his war service. But he is also famous for another reason - as one of Brazil's top footballers of the 1940s, becoming a midfielder for some of the biggest teams in Brazil.

"At that time professional players didn't exist, it was all amateur," says Santos. "I played for Fluminense, Botafogo, Vasco da Gama. The players were all newspaper sellers and shoeshine boys."

Nowadays Santos lives a quiet life in south-western Brazil with Guilhermina, his wife of 61 years.

"I like to play my trumpet, I like to sit on the veranda, I like to have a cold beer. I have a lot of friends and they pass by and chat," he says.

Memories of the farm, though, are impossible to escape.

"Anyone who says they have had a good life since they were born is lying," he says. "Everyone has something bad that has happened in their life."

Brazil and the Nazis

Integralismo brasileiro was a fascist political movement founded in Brazil in 1932 It adopted some of the hallmarks of European fascism - a uniformed paramilitary wing, regimented street demonstrations and anti-Marxist rhetoric Preached nationalism as shared spiritual identity Despite its slogan - "Union of all races and all peoples" - many members held anti-Semitic views The movement was co-opted by President Getulio Vargas, who imposed a full dictatorship in Brazil in 1937 Brazil initially declared itself neutral in World War Two, but in 1942 joined the Allies Vargas was ousted in 1945 After WWII several Nazis fled to S America - notorious SS doctor Josef Mengele evaded capture for decades and died in Brazil in 1979

Colour pictures by Gibby Zobel. His report was broadcast on Outlook, on the BBC World Service. Listen via BBC iPlayer Radio or browse the Outlook podcast archive.