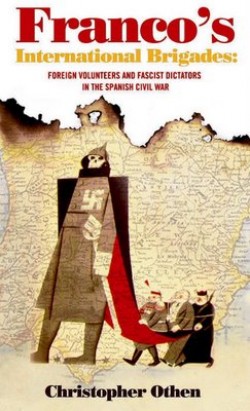 " ... Franco soon realised that the ineffective units that arrived in Spain were led by cynical opportunists who regarded the war as a means of advancing their own political ambitions at home. ... "

SEVEN DECADES after the fall of the Republic, the Spanish Civil War continues to divide opinion in Spain. Recent controversies prompted by an abortive judicial investigation into nationalist war crimes, the introduction of the (rather Orwellian-sounding) Historical Memory law, and the removal of the last public statue of Franco, have provoked bitter disputes not only between left and right but between Spaniards intent on confronting the horrors of their nation's civil war and those who warn against reopening its divisions.

Beyond Spain, there is no such ambiguity. The 40,000 volunteers from over 30 countries who fought in the International Brigades are almost universally regarded as heroic defenders of democracy, whereas the 90,000 foreigners who backed Franco are - like Eoin O'Duffy's Irish Brigade - forgotten, reviled or ridiculed.

Historians could be accused of a similar bias. Although the International Brigades have generated a vast historiography, one disproportionate to their actual impact on the conflict, Franco's volunteers have until recently remained a neglected field of study.

Consequently, much less is known about the motives of the Italians, Moroccans, Germans, Portuguese, Irish, Russians and Romanians who fought for Franco. In certain respects, "los otros Internacionales" can be seen as a mirror image of the International Brigades - idealists motivated by anti-communism rather than anti-fascism or Christianity rather than secular republicanism - who played a premature role in an ideological civil war which would consume all of Europe in 1939. The dictators who supported intervention on both sides - Stalin, Mussolini and Hitler - were motivated by a similar self-interested cocktail of ideology, geopolitics and prestige.

But it would be wrong to regard Franco's supporters as idealists in the same way as the volunteers of the International Brigades. Few of the German and Italian combatants who made up the bulk of Franco's foreign supporters were volunteers. For Hitler, the small but effective Condor Legion (the expeditionary force drawn from the Luftwaffe that was responsible for the bombing of Guernica) provided a valuable testing ground for modern weapons and new tactics. Despite its name, Mussolini's much less successful Corpo Truppe Volontarie, was also a state-sponsored force, composed of regular Italian soldiers, Blackshirt militia men and some genuine volunteers.

The motives of Franco's more genuine volunteers also tend to reflect poorly on the nationalist cause. Franco - as Othen vividly demonstrates - attracted an unsavoury collection of anti-Semites, fascists, adventurers and cranks. Many, particularly from impoverished Morocco and Portugal, fought for money rather than principles. The involvement of almost 80,000 Islamic combatants demonstrated the hollowness of the Christian rhetoric of Franco's crusade. But it was this aspect of the conflict which most appealed to the 700 Irishmen who volunteered for Franco, many of whom became disillusioned by the reality of life in nationalist Spain. In other respects, the Irish Brigade was more representative. In contrast to the left, the far-right volunteer militias were not motivated by internationalism. Franco soon realised that the ineffective units that arrived in Spain were led by cynical opportunists who regarded the war as a means of advancing their own political ambitions at home.

Christopher Othen provides an accessible introduction into this neglected aspect of the Spanish Civil War, but it is one which focuses on personalities and colour rather than analysis. Despite the scholarly footnotes and bibliography, it is marred by inaccuracies and adds little to Judith Keene's more authoritative Fighting for Franco (2001).

Fearghal McGarry teaches history at Queen's University Belfast. His most recent book, Eoin O'Duffy: A Self-made Hero, was published in paperback by Oxford University Press last year. His next book, The Rising: Easter 1916 will be published this year.