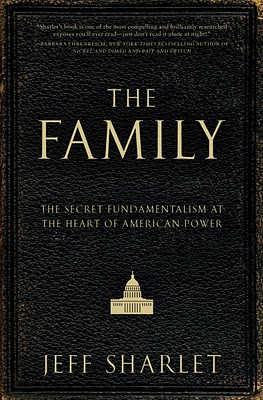 GOD and money are the great levers of American power. Deals are made and alliances forged at prayer sessions around Washington.

The disgraced Bill Clinton prayed with Billy Graham while others go to Chuck Colson, the Watergate jailbird who became America’s most celebrated evangelist. These men are known around the world.

But author and academic Jeff Sharlet says they do not have the clout or connections of Doug Coe, the leader of a secretive fundamentalist group known simply as the Family.

That is a big call given that Coe is “off the radar” and essentially invisible as a mover and shaker. Although the organisation has been around since 1935, he is best known as the organiser of the National Prayer Breakfast, held in Washington each February.

But Sharlet’s expose, which combines investigative journalism and history, is intriguing, startling and ultimately convincing.

Coe and his followers are “avant-garde” fundamentalists who target Washington’s elites by setting up prayer cells around congressmen and generals. There are no passwords or secret handshakes but members are discreet and told not to commit deliberations or deals to paper.

The network extends to pro-American foreign leaders, some of them dictators. The late Indonesian president Suharto and Somalia’s bloodthirsty strongman Siad Barre were “brothers” of the Family. They prayed with congressmen, oilmen and arms dealers. Later some lucrative business was done.

The scary part is that Coe admires the leadership models of Adolf Hitler, Mao Zedong and even Osama bin Laden, who built disciplined organisations around a fanatical core.

There is, Sharlet writes, something disturbing about a ministry which ignores traditional Christian teaching and which celebrates power for the powerful. Domestically, the ministry works chiefly with conservative Republicans, but senior Democrats and even Catholics are within its orbit.

Hillary Clinton is regarded as a “fellow traveller” of the organisation and attends Coe’s weekly Senate prayer breakfasts.

George W. Bush is not a member, but he was famously “born-again” at a prayer group set up by the Family.

As an investigator, Sharlet is first-rate. Much of the material here comes from interviews and a treasure-trove of confidential documents. He managed to infiltrate the Family on its ground floor by gaining admission to Ivanwald – a house in Arlington, Virginia, where some of the next generation of cadres is schooled. As a part-Jewish New Yorker, Sharlet was an unlikely recruit among a crew of preppy, athletic young devotees who spend their time praying and playing endless scratch games of basketball.

The author is fascinated by a 1989 Coe speech in which the minister admired the fanaticism of Maoist Red Guards who were prepared to kill their parents rather than betray the cause.

It is this that sets the Family apart from mainstream conservative groups – such as the Southern Baptist Convention – which focus on opposing abortion, gay marriage and gun control. Coe’s followers, writes Sharlet, broadly support these stances but their eyes are on the big prize, a “world government under God”.

Should anyone be worried about congressmen, judges and mayors who meet in prayer cells?

Sharlet says it does matter and points to what the organisation has achieved since it was founded by Norwegian immigrant Abraham Vereide in Seattle in 1935.

Then it was called the Fellowship and it was an alliance of conservatives opposed to communism and labour unions. By 1944 Vereide’s prayer groups involved a third of the members of Congress. During the Eisenhower presidency, he started the National Prayer Breakfast and expanded his influence into the military and the CIA. During the 1950s, Vereide worked with the Pentagon and the CIA on a worldwide anti-communism propaganda campaign and he supported US involvement in Vietnam.

Coe took over in the late 1960s and decided to go underground, as he “crafted ever more complex hierarchies behind the scenes”.

Sharlet is not an angry liberal and the tone of the book is balanced, reasonable and often good humoured.

The author likes the young men at Ivanwald even as he wonders why the handsome young heterosexuals such as “Jeff C” were so overdosed on Jesus and running they had no time for women.

In some ways Sharlet admires fundamentalism and recognises its place in American history – from the Mayflower to the “Great Awakening” of preacher Jonathan Edwards in 1735 and on to Bill Graham and the current flock of televangelists.

And he recognises its resilience, noting that the scandals surrounding Ted Haggard and Jimmy Swaggart strengthen the faithful in a way that a forest fire clears the underbrush.

But his exasperation rises when he contemplates how Suharto and other dictators benefited from their Family connections. In 1970, Suharto had a meeting with a Senate prayer group attended by secretary of defence Melvin Laird. Over the next two decades, Family-linked congressmen backed arms sales to Indonesia even as its military invaded East Timor and slaughtered its civilians. This, Sharlet writes, made them “brothers in blood”.

It is unlikely that this book will cause any great concern in America’s power elite.

The author, who is editor of TheRevealer.org, first wrote about Ivanwald in 2003 for Harper’s magazine and there have been a smattering of articles about Coe and Vereide in newspapers over the years.

But it will give outsiders a better picture of US fundamentalism in its most pure and disturbing form.

Previous Article
The Bush Family: Dark Heart of the American Dream
Next Article
Book Review – SUPERCLASS: The Global Power Elite and the World They Are Making

Right-Wing Christians: Touched by God or Touched in the Head
Oct 22

Book Review – SUPERCLASS: The Global Power Elite and the World They Are Making
Jun 05