BOOK REVIEW ‘A Bomb in Every Issue’ by Peter Richardson

Short, explosive, unforgotten: The story of Ramparts Magazine and its lingering influence long after it was gone. 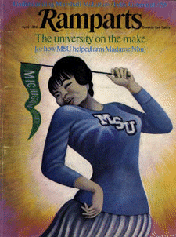 Live fast, die young, leave a good-looking corpse. That's the stuff of myth, but Ramparts pulled it off.

Published for just 13 years, the San Francisco magazine not only blew the cover off the biggest stories of its era, it also helped set the ideological agenda for its core demographic, the New Left, and forced the mainstream press to follow its lead. At its peak in late 1967, circulation reached 250,000 -- proof, notes Peter Richardson in his lively history of the magazine "A Bomb in Every Issue," that "mainstream media techniques could be used to advance leftist politics."

Yet less than a decade later, Ramparts was history, taken down by the usual stuff that eats away at organizations: financial strife and power struggles. Richardson compares the trajectory to that of a highflying rock band: "It blew minds, launched solo careers, and spawned imitators," he writes.

Also like a rock band, Ramparts was very much a creation of its time, and when that time passed, its creative evolution couldn't keep up.

Ramparts launched quietly in 1962, started by an idealist named Edward Keating to challenge the traditional dogma of the Catholic Church. That same year, Keating recruited young Bay Area journalist Warren Hinckle, a hard-drinking, eye-patch-wearing wild man with a sense for the sensational. Part muckraker, part P.T. Barnum, Hinckle initially was a writer, then served as promotions manager before taking over as executive editor.

Hinckle understood the value of controversy. Ramparts got its first taste in 1965, after it ran an interview with German playwright Rolf Hochhuth, whose play, "The Deputy," accused Pope Pius XII of failing to challenge the Nazis during the Holocaust. Readers were outraged and the magazine had the buzz it wanted. By mid-1965, Ramparts had ditched Catholicism for good.

Hinckle brought in fellow travelers such as art director Dugald Stermer, who gave Ramparts its stylized look. Robert Scheer became its editorial soul. By the time Scheer was named managing editor in October 1966, Richardson writes, "the magazine had found its voice, identified its causes and joined the battle."

The battle was also taking place internally, Richardson notes, as Hinckle wrested control of the operation from Keating. Opinion soon gave way to investigative reporting. A 1966 exposé, about the CIA using the Michigan State University campus to train the Saigon police, put the staff on the agency's radar.

Two years later, Scheer and Stanley Sheinbaum broke the bombshell that the agency was secretly funding civilian organizations such as the National Students Assn. It was a major moment for the New Left.

When Ramparts broke a story, Hinckle made sure everyone knew about it; he took full-page ads in the New York Times to trumpet the scoops. There was much to trumpet: The magazine published Eldridge Cleaver's prison diaries, championed his release from prison and hired him as an editor when he was freed.

The hits just kept on coming. Ramparts was the first magazine to publish New Orleans district attorney Jim Garrison's conspiracy theories about the JFK assassination, and it got the U.S. rights to the diaries of Che Guevara, since, as Richardson points out, it was the one American outlet Fidel Castro trusted with these writings.

But Richardson is also quick to dispel the mythology surrounding Ramparts: In spite of chronic financial issues, Hinckle was an egregious spendthrift whose devil-may-care attitude often put the magazine in peril. And in spite of its radical cred, Ramparts attitude toward women and sexuality left a lot to be desired. A sample headline tease from 1968 read: "Breaking the Faggot Barrier in Men's Clothes."

Richardson traces Ramparts' downward spiral to its coverage of the 1968 Democratic National Convention in Chicago. Sparing no expense, Hinckle sent 10 staffers to cover the tumultuous events. Though the daily Ramparts Wall Poster was a valuable resource, it failed to tell the entire story -- that the staff was complicit with organizers such as Tom Hayden and knew in advance of Hayden's plan to confront Chicago police.

"We didn't dare touch the one big story that was ours exclusively: how a relatively small group of American radicals had made common cause with the enemy and was leading the left toward self destruction and nihilism," Sol Stern recalls.

The left imploded after Chicago. By early 1969, Ramparts declared bankruptcy. Scheer replaced Hinckle in the top spot but lacked the charismatic firepower to lead the staff through lean times. When he offered Susan Sontag $1,500 -- the entire monthly editorial budget -- for a piece on Sweden, the staff was outraged. He was ousted in a coup led by David Horowitz, who sought to reshape Ramparts as a collective.

But even as Ramparts faded, Richardson notes, its influence was seen in better-funded operations such as Rolling Stone, "60 Minutes" and even the New York Times, which published the Pentagon Papers in 1971 -- an instance of Ramparts being beaten at its own game.

Meanwhile the magazine chugged along, serving as a political forum for radical celebrities like Jane Fonda and John Lennon, until it died in 1975. "Toward the end of its life, it was competing not only with established outlets but with upstarts created or at least partly in its own image," Richardon writes.

Yet we're still talking -- and writing -- about Ramparts today because it did change America. In addition to birthing a generation of thoughtful writers like Scheer, Stern and Seymour Hersh, its existence forced the press to keep the power structure honest and for all of us to question authority -- which is, no matter what anyone tells you, the benchmark of a healthy democracy.

Himmelsbach is a Los Angeles writer and producer.