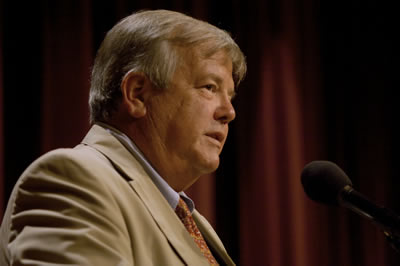 “The propaganda against the Agency is willful. Underneath the systematic attacks lies an agenda to demean the US and its values. … ” – Bernie Reeves … What “values” have given us genocide, foreign occupation, torture and forced “confessions,” secret trials, coup plots, wiretaps, illicit detentions, not to mention fascist PROPAGANDA assaults that are so willfully false that they make the head reel? Fascist values. My own “systematic” attacks demean these values on a daily basis. So Bernie, you mealy-mouthed piece of crap, kindly go the Hell so the rest of us can live in a peaceful democracy untainted by your fascist values.

A recent column by Bernie Reeves, editor and publisher of Raleigh’s Metro Magazine and founder of the annual Raleigh Spy Conference (www.raleighspyconference), not only captured the Central Intelligence Agency’s attention, it was placed in the number one position on the Office of Public Affair’s daily media highlights.

The column, entitled “Spies Create Far Better World,” was Reeves’ November 2007 installment of “My Usual Charming Self,” which appears each month in Metro (www.metronc.com). It was written after he attended an award ceremony at CIA headquarters in Washington, D.C., for Brian Kelley. The FBI wrongly investigated Kelley for four years until Robert Hanssen confessed in February of 2001 that he was the FBI officer who had been selling American secrets to the Russians for 20 years. During the ceremony, the CIA presented Kelley with the Distinguished Service Intelligence Medal and formally apologized for the ordeal he and his family went through during the erroneous investigation.

The event inspired Reeves to write a column supporting the role intelligence agencies, including the CIA, have played in global accomplishments, most notably winning the Cold War.

“CIA takes it on the chin for every thing that goes wrong and rarely receives credit when things go right – such as winning the Cold War,” Reeves said recently. “The propaganda against the Agency is willful. Underneath the systematic attacks lies an agenda to demean the US and its values. I meant what I wrote.”

The column also exposed the treatment Kelly received while he was under suspicion as a spy. When the truth came out, Kelly refused to sue the FBI. According to Reeves, “His answer was simple. He did not want to harm the Agency because he believed in its mission. And we should all be thankful that heroes like Kelley ignore the attacks on the CIA — and keep on working to keep us free.”

The CIA’s Public Affairs Officer told Kelley he thought it was a ‘terrific article, which reflected very favorably on CIA and you,’ “ Kelly wrote in an email to Reeves. “As such, he made the decision to put it on the top of the heap that day, which meant that virtually everybody who read the highlights would have seen it. It could have been buried at number 45 for example and would have lost a lot of potential readers.”

Kelly noted that the daily media highlights have 40 to 60 items each day from a vast assortment of media outlets. When he learned that Reeves’ column was the first on the list, “My family was very pleased and wanted to convey their appreciation,” he wrote.

The entire column can be read in Raleigh Metro Magazine’s November 2008 edition, now on newsstands, and on the website – www.metronc.com — under “My Usual Charming Self.”
•••••••••••
BERNIE REEVES BIO

… If you attended the Fourth Annual Raleigh International Spy Conference Aug. 23-25, presented by Metro Magazine, in partnership with the North Carolina Museum of History, you knew this already from the keynote session delivered by Brain Latell, former National Intelligence Officer for Latin America and author of the timely new book: After Fidel: The Inside Story of Castro’s Regime and Cuba’s Next Leader.

Latell played psychic tag with Fidel for two decades. Cuban agents followed the CIA officer and attended classes he taught at Georgetown University, passing on opinions and information to Fidel, who would include responses to Latell in his speeches.

Art Padilla, professor of management at NC State University—and an expert in leadership styles—made it clear Castro is a “destructive” dictator who worshipped Mussolini and obscured his troubled legitimacy with his peculiar and paranoid personality. Don Bohning, former Latin American bureau chief for The Miami Herald (and author of The Castro Obsession: US Covert Operations Against Cuba, 1959-1965) explained how this paranoia developed during the series of covert and overt operations by the US to oust Fidel, beginning with the failed Bay of Pigs invasion, through CIA’s Operation Mongoose—that included bizarre plans to assassinate Fidel—to the modern era of embargoes, radio broadcasts and efforts to organize Cubans to overthrow the regime. …

Previous Article
Is the GOP Ready to Nominate a Mob-Connected Man for the Presidency?
Next Article
Moussaoui Judge Doubts Reliability Of Government Briefs Regarding Classified Information