Baltimore: GOP Aide Convicted for Scheme to Keep Black Voters Away from the Polls - The Constantine Report
0 SHARES

GOP Watch » Baltimore: GOP Aide Convicted for Scheme to Keep Black Voters Away from the Polls

Baltimore: GOP Aide Convicted for Scheme to Keep Black Voters Away from the Polls 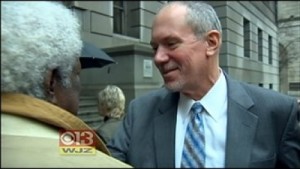 Paul Schurick, a former governor's aide, has been sentenced for his role in a GOP voter suppression scheme

BALTIMORE (AP) — A political aide to Maryland's former Republican governor was sentenced to 30 days of home detention Thursday for an Election Day robocall conspiracy that prosecutors cast as an effort to keep black voters away from the polls.

Prosecutors said the automated calls went out to 110,000 people in areas with high percentages of black voters, who tend to vote reliably Democratic. The calls implied that voters did not need to head to the polls because Democrat Martin O'Malley had already defeated Republican Robert Ehrlich.

Judge Lawrence Fletcher-Hill called the scheme an offense that strikes at the heart of the nation's most important values. The judge also gave Paul Schurick a one-year suspended jail sentence and ordered him to serve 500 hours of community service in Prince George's County and Baltimore city, where the calls were directed, over four years of his probation. A fine was not imposed.

"This needs to send a message to anyone who would interfere with anyone's opportunity to vote that it's absolutely unacceptable," Fletcher-Hill told Schurick.

While state prosecutors did not seek jail time, they asked that the sentence be severe enough to deter others. Schurick himself asked the judge to consider his 30 years of public service, not where he was at 4:30 p.m. on Election Day 2010, when he approved the robocalls in a phone conversation with consultant Julius Henson.

"My greatest focus that day was making sure that our supporters went to the polls," he said. "That 90-second phone call destroyed any legacy I would have hoped to have left. ... It was the wrong decision, but it was mine and mine alone."

Schurick, who was convicted of fraud and conspiracy charges related to the robocalls, testified during trial that he rejected Henson's black voter suppression strategy dubbed "The Schurick Doctrine" but later approved the robocall script. He said he didn't know the authority line, which would have noted that the message came from Ehrlich's campaign, would be left off. O'Malley handily won the rematch against Ehrlich, whom he had unseated in 2006.

"It should have been obvious, when Mr. Henson read the text of the call and got approval," Fletcher-Hill said. "You should have said, 'No. It's deceitful. It's illegal. We will not do it.'"

Henson, the consultant, has said the calls were not meant to suppress black voter turnout as prosecutors claimed. His trial on similar charges is now scheduled to begin in April.

The call said: "Hello. I'm calling to let everybody know that Governor O'Malley and President Obama have been successful. Our goals have been met. The polls were correct, and we took it back. We're OK. Relax. Everything's fine. The only thing left is to watch it on TV tonight. Congratulations, and thank you."

Outside the courthouse, Schurick reiterated that his decision was a mistake, a violation of the law and a "profound personal failure." But he approved the messages because he believed the idea of an O'Malley victory would motivate thousands of African-American supporters of Ehrlich to go vote — even if the idea was counterintuitive, he said.

This case will make the "extreme rhetoric" from political campaigns a thing of the past, Schurick said.

"Trust me. Political professionals in Maryland are very, very aware of the outcome of the trial and the consequences," he said. "I think you will see a significant shift toward blandness."