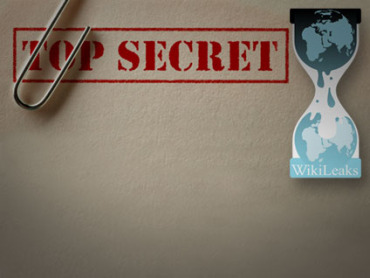 Vladimir Putin rules Russia by allowing a venal elite to siphon off cash from the world's biggest energy producer, according to a picture painted by US diplomatic cables leaked by WikiLeaks.

Here are Thursday's highlights in the unfolding story:

The website had previously given a flavour of the US view of Berlusconi, but what appeared to be a full cable from the US embassy in Rome fills out a gloomy assessment that depicts Italy in thrall to Moscow.

A US ambassador described Egypt, recipient of billions of dollars in US aid since making peace with Israel in 1979, as a "stubborn and recalcitrant ally" in a February 2009 cable.

The United States is worried about a rise in organised crime in Israel and is doing all it can to prevent the violent gangs from expanding their operations across the Atlantic.

A cable entitled "Israel, a promised land for organised crime?" showed the United States was concerned about more than just nuclear diplomacy and peace prospects in the Middle East.

UN nuclear watchdog chief Yukiya Amano insisted he was impartial in his work, after leaked US diplomatic cables said he agreed with the United States on key issues including Iran.

Britain's Guardian newspaper, citing such leaked notes, this week reported Amano had suggested in meetings with US diplomats before he took office last year that "he was solidly in the US court on every key strategic decision".

The United States believes there is little prospect Sri Lanka will hold anyone accountable for the bloody end of the war with the Tamil Tigers because war crimes allegations involved top government figures, according to a Jan. 15 cable sent by Patricia Butenis, US ambassador in Colombo.

Another cable, from the US embassy in London, revealed an admission by a British diplomat that former Foreign Secretary David Miliband pressured Sri Lanka's government for a ceasefire to help secure Labour Party votes from Britain's Tamil diaspora.

Turkmenistan's leader is described as "not very bright" and "a practised liar" in a cable from the US embassy in the gas-rich Central Asian state.

It said Turkmen President Kurbanguly Berdymukhamedov did not like the United States, Iran or Turkey, but was fond of China. Fastidiously neat, he once insisted all men who worked in his dental clinic had creases in their trousers.

Cuban intelligence services directly advised Venezuelan President Hugo Chavez in what a US diplomat called the "Axis of Mischief", according to a State Department cable.

Other cables released by the group revealed US anxiety at Chavez's "cosiness" with Iran, and concerns of Venezuelan Jews over what they saw as government prejudice against them.

Hrafnsson, speaking at an event in London, confirmed that the website had information about the operations of a US bank, but declined to identify it.

Earlier this week we learned from Wikileaks that the Bush Administration tried to stop Germany from investigating the CIA’s alleged torture of a German citizen, Khalid El-Masri, who’d been mistaken for an al Qaeda terrorist and imprisoned in Afghanistan. I observed that the Obama Administration would have been hard-pressed to take a different position, given that it’s refused to investigate (or allow others to sue over) those claims itself. ...

As El Pais put it (translation by Scott Horton at Harper’s):

the Embassy of the United States in Madrid wielded powerful resources in an extraordinary effort to impede or terminate pending criminal investigations in Spain which involved American political and military figures assumed to have been involved in incidents of torture in Guantánamo, violations of the laws of war in Iraq or kidnappings in connection with the CIA’s extraordinary renditions program.

... The US Embassy started tracking the case as soon a Spanish human rights group requested the investigation in March 2009. But after Republican Senators Judd Gregg and Mel Martinez got involved, the Obama administration’s chargé d’affaires at the US embassy in Spain became more active as well. According to the cable, the Americans “underscored that the prosecutions would not be understood or accepted in the US and would have an enormous impact on the bilateral relationship” between Spain and the United States. As Corn recounts: “Here was a former head of the GOP and a representative of a new Democratic administration (headed by a president who had decried the Bush-Cheney administration’s use of torture) jointly applying pressure on Spain to kill the investigation of the former Bush officials.”

As I noted in my earlier post on the El-Masri case, it’s not all that surprising that the U.S. government wouldn’t want its own senior officials prosecuted in another country. But for the Obama administration to play such an active role in thwarting the ordinary course of an ally’s judicial system which was investigating crimes that President Obama had himself decried is pretty disturbing.

Horton put it this way yesterday: “These cables show that the U.S. embassy in Madrid had far exceeded [its] mandate . . . and was actually successfully steering the course of criminal investigations, the selection of judges, and the conduct of prosecutors.” In Spain, the “disclosure has created deep concern about the independence of judges in Spain and the manipulation of the entire criminal justice system by a foreign power.”

The way the Obama administration is wielding its power to thwart the rule of law abroad ought to create deep concern in the United States as well.