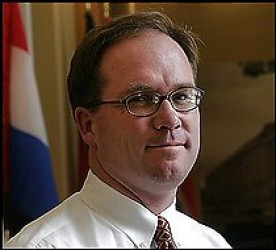 Jeffrey A. Taylor is the interim United States Attorney for the District of Columbia.

Prior to his work in Washington, DC, Jeffrey Taylor served as an Assistant U.S. Attorney for the Southern District of California from 1995–1999. [1] From 1999 to 2002, Mr. Taylor served as majority counsel on the Senate Judiciary Committee where he advised Chairman Orrin Hatch and drafted provisions of the USA PATRIOT Act. [2]

Before his appointment as U.S. Attorney, Mr. Taylor served as Counselor to Attorneys General John Ashcroft and Alberto Gonzales from 2002 to 2006 where he oversaw law enforcement operations by U.S. attorneys.[1] He was appointed interim U.S. Attorney for the District of Columbia by Alberto Gonzales on September 22, 2006 and was sworn in seven days later; interim U.S. attorneys do not need to be confirmed by the Senate.[1] Interim U.S. attorneys have no term limit, as a result of an amendment to the law governing interim attorneys included in the USA Patriot Reauthorization Act of 2005;[2] formerly interim appointees had a 120-day term limit, and could be re-appointed (without term limit) at the end of the 120-day term by the chief judge of the district court.

Mr. Taylor's position came under heightened interest in March 2007 during the dismissal of U.S. attorneys controversy. On March 20, 2007, President Bush declared in a press conference that White House staff would not testify under oath on the matter if subpoenaed by Congress.[3] One who ignores a Congressional subpoena can be held in contempt of Congress, but the D.C. U.S. Attorney must convene a grand jury to start the prosecution of this crime.

Under 2 U.S.C. § 194, once either the House or the Senate issues a citation for contempt of Congress, it is referred to the U.S. Attorney for the District of Columbia, "whose duty it shall be to bring the matter before the grand jury for its action."[4] It is unclear (as of March 20, 2007) whether Mr. Taylor would fulfill this duty to convene a grand jury, or resist Congress at the direction of Bush or Gonzales.

http://en.wikipedia.org/wiki/Jeffrey_A._Taylor••••••Taylor's Role in the Bush Regime

" ... He was appointed to put out a lot of fires. Jeffrey A. Taylor is one of the Bush administration's insurance policies, a brake on the rule of law now that there is no GOP majority in Congress to protect and obstruct for them. ... "http://chickasawpicklesmell.blogspot.com/2007/06/jeffrey-taylor-us-attorney-in-palfrey_30.html

AC Note: Blogger Matt Janovic - who says that he worked on the DC Madam defense team - claims that I'm a "conspiracy nut" for expressing suspicions that Palrey was murdered and her "suicide" staged ... Janovic posted the conspiracy theory above on June 30, 2007. Visit his site (where I am excoriated for all sorts of vile things, eg. "profiting" on the "suicide" of Jeane Palfrey), but, he warns, "put on your adult diapers." (?)•••••••DC Madam Connection to Attorney Fired by the DoJ - and a Murder

Thomas M. DiBiagio was one of the attorneys fired by Gonzales.

"Thomas M. DiBiagio is a former United States Attorney in the state of Maryland. After eight U.S. attorneys were fired by te Bush administration in 2006 for performance-related issues under a clause of the PATRIOT Act (see Dismissal of U.S. attorneys controversy), stated in March 2007 that he was ousted because of political pressure over public corruption investigations into the administration of then-Gov. Robert L. Ehrlich Jr. Investigations involved links between politicians and the D.C. Madam Scandal. Jonathan Luna, an assistant to DiBiagio who was involved in the probe. was murdered in 2003."

http://en.wikipedia.org/wiki/Thomas_M._DiBiagio•••LUNA WAS STABBED 36 TIMES - "As of this date, the FBI hints Luna committed suicide. ... "

FOR MORE ON JON LUNA'S MURDER, "the most intriguing true crime currently in process and still unsolved.":

Taylor: "Earlier today, several search warrant affidavits were unsealed in federal court in the District of Columbia. Among other things, these search warrants confirm that the government was investigating Dr. Ivins in connection with the attacks, which killed five individuals and injured 17 others in 2001. Dr. Ivins was a resident of Frederick, Maryland, and a long-time anthrax researcher who worked at the U.S. Army Medical Research Institute for Infectious Diseases, known as USAMRIID. ...

We are now beginning the process of concluding this investigation. Once this process is complete, we will formally close the case. Had Dr. Ivins beenindicted, he would have been presumed innocent until proven guilty as in the case with any other criminal defendant. We regret that we will not have the opportunity to present the evidence to a jury to determine whether theevidence establishes Dr. Ivins' guilt beyond a reasonable doubt. ...

How mass murder committed by Blackwater guards stationed in Iraq was reduced to "manslaughter" in an American courtroom:

... The five guards were charged with 14 counts of manslaughter, 20 counts of attempted manslaughter and one count of using a machine gun to commit a crime of violence. The machine gun charge, typically used in drug cases, carries a 30-year minimum prison sentence. ...

Blackwater, which was not charged in the case, maintains its guards were protecting themselves from what they believed was an imminent car bomb attack.

“We think it’s pure and simple a case of self-defense,” defense attorney Paul Cassell said Monday as the guards were being booked. “Tragically, people did die.” ...

" There have been numerous cases, numerous instances of reported abuse that have either gone uninvestigated or, if investigated, the prosecution just was dropped. And there absolutely needs to be more resources put into these prosecutions. .... "http://www.democracynow.org/2007/12/19/broadcast_exclusive_iraqi_witnesses_victims_describe

The handoff: Legal manipulations at Rice's State Department assured there would be no prosecution in the States (Iraq, of course, may actually see it through, per recent news reports):

Blackwater given Immunity - Now they can freely confess to everything

Potential prosecution of Blackwater guards allegedly involved in the shooting deaths of 17 Iraqi civilians may have been compromised because the guards received immunity for statements they made to State Department officials investigating the incident, federal law enforcement officials said yesterday.

FBI agents called in to take over the State Department's investigation two weeks after the Sept. 16 shootings cannot use any information gleaned during questioning of the guards by the department's Bureau of Diplomatic Security, which is charged with supervising security contractors.

Some of the Blackwater guards have subsequently refused to be interviewed by the FBI, citing promises of immunity from State, one law enforcement official said. The restrictions on the FBI's use of their initial statements do not preclude prosecution by the Justice Department using other evidence, the official said, but "they make things a lot more complicated and difficult." http://www.bartcop.com/2064.htm

This proved to be a prophetic statement: The Blackwater case is so "complicated and difficult" that Taylor's office has made no progress on it.

Mass murder takes a back seat at DoJ.

Meanwhile, a Democratic governor in Illinois is to be prosecuted and impeached or allegedly selling a Senate seat ...

Experiments on our Military