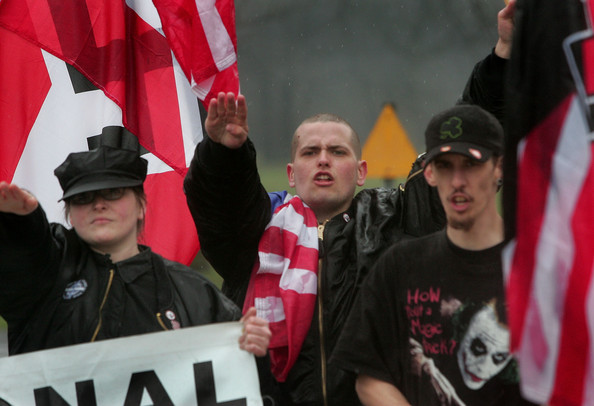 Skokie officials were in court today.  They were trying to prevent Nazis from holding a rally in their village.

The National Socialist Party of America was a tiny group of perhaps a hundred people.  They were led by a man named Frank Collin.  The party had headquarters in the Marquette Park area of Chicago, where they'd been protesting African-American presence in the neighborhood.

Chicago officials had banned the Nazis from speaking in the park.  Looking for publicity, the party then announced it would hold a rally in Skokie.  More than half of the suburb's 80,000 residents were Jewish.  Many of these people were Holocaust survivors, or relatives of Hitler's victims.

Today's lawsuit was being filed in the Circuit Court of Cook County.  Skokie alleged that the proposed demonstration was "a deliberate and willful attempt to exacerbate the sensitivities of the Jewish population."  The event would incite racial and religious hatred in the village.

The next day, Judge Joseph M. Wosik granted an injunction to halt the rally.  Jewish groups were already organizing counter-demonstrations against the Nazis.  The judge said he was acting to prevent possible violence.

Nazi leader Collin did not like the ruling.  He said his free speech rights were being violated.  He threatened to lead a march through Skokie, regardless of any court action.The Skokie lawsuit was only the beginning of the legal maneuvers.  The village next passed a series of ordinances designed to limit hate groups.  The Nazis responded by going to court with their own suit.

The Nazi case was supported by the American Civil Liberties Union.  The organization had a large Jewish membership, and their lawyer handling the Nazi case was Jewish.  Still, the ACLU saw the matter as an important free speech issue.

After a year of various hearings, the U.S. Court of Appeals ruled the Skokie ordinances unconstitutional.  The village was ordered to allow the Nazi demonstration.  Collin said his group would rally in front of the Skokie Village Hall on June 25, 1978.And then, at the last minute, the Nazis called off the Skokie rally.  The City of Chicago had decided to let the party march in the Loop.  That event proved to be a bust, lasting all of 10 minutes.

The Nazi controversy was dramatized in a 1981 TV-movie titled "Skokie."  Nazi leader Frank Collin himself was later forced out of the party--when it was revealed that he was Jewish.