" ... He thought it was funny to refer to Jews in print as 'kikes.' ... In 1965, Pegler expressed the desire for Robert F. Kennedy’s murder, saying that he hoped 'some white patriot of the Southern tier will spatter [Kennedy’s] spoonful of brains in public premises before the snow flies.' .. " 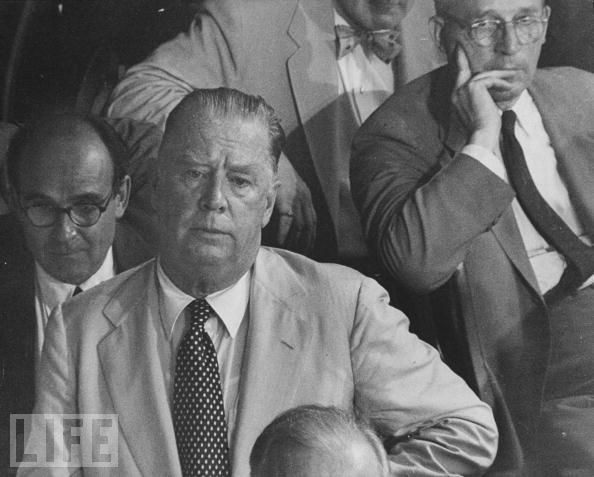 If you mention the name Westbrook Pegler nowadays you’ll just get quizzical stares but in his heyday he was the most famous conservative writer in America. Widely syndicated and a best selling author, he cut as prominent a figure in the 1940s and 1950s as Glenn Beck and Ann Coulter do today.

Pegler was a master of invective. He once described Eleanor Roosevelt as “the chief prostitute of those who pretend to extol the First Amendment.” John F. Kennedy, Pegler observed, was a “low-browed donkey with the honour of a pickpocket” as well as a “mean, ratty, dough-heavy, Boston gang politician.” These insults did little to elevate political debate but Pegler had many fans who admired the sheer linguistic dexterity and profuseness of his rage even if they didn’t share his politics. Pegler’s mastery of ornery slang placed him squarely in the tradition of Mark Twain and H.L. Mencken.

A hard-drinking punch-drunk wordsmith, Pegler was addicted to verbal violence. He had a troubling habit of calling for the death of those he disagreed with. In 1933, Giuseppe Zangara tried to shoot President-elect Franklin Roosevelt. He failed but managed to kill the Mayor of Chicago and wounded four other people. Pegler later regretted the fact that Zangara “hit the wrong man.”

In a 1950 column Pegler contended that, “the only sensible and courageous way to deal with Communists in our midst is to make membership in Communist organizations or covert subsidies a capital offence and shoot or otherwise put to death all persons convicted as such.” This policy, had it been carried out, would have resulted in the deaths of ten thousand or more American citizens, a violent political purge of a sort that the United States has fortunately never experienced. In 1965 Pegler expressed the desire for Robert F. Kennedy’s murder, saying that he hoped “some white patriot of the Southern tier will spatter [Kennedy’s] spoonful of brains in public premises before the snow flies.”

Interestingly, Pegler started falling out of public favour in the late 1950s. In part this was because he stopped hiding his once-latent racism and anti-Semitism. He thought it was funny to refer to Jews in print as “kikes.” But it is also the case that his verbal bloodthirstiness started to trouble his fans, even those on the far right. By the end of his life he was no longer welcome even in the John Birch Society, a conspiracy-minded group that adhered to the idea that Dwight Eisenhower was a communist. Pegler died bitter and socially isolated.

Although Pegler has been long-forgotten, his spirit still seems very active on the political right. Recently, a spate of conservatives have started advocating Julian Assange’s assassination.

Speaking on the CBC on Monday night, Tom Flanagan, erstwhile eminence grise in the Harper administration, said, “I think Assange should be assassinated, actually.” When challenged on these remarks, Flanagan said, “I’m feeling very manly today.” How is calling for the death of a private citizen a “manly” act, especially coming from the mouth of a doughy middle-aged university professor? The words lily-livered and blustery seem more apt than “manly.” ... CONTINUED