" ... Van Zante said during an interview with the Wausau Daily Herald that he embraces the image of the swastika -- not as a Nazi symbol but as 'a symbol of my heritage and my people.' ... " 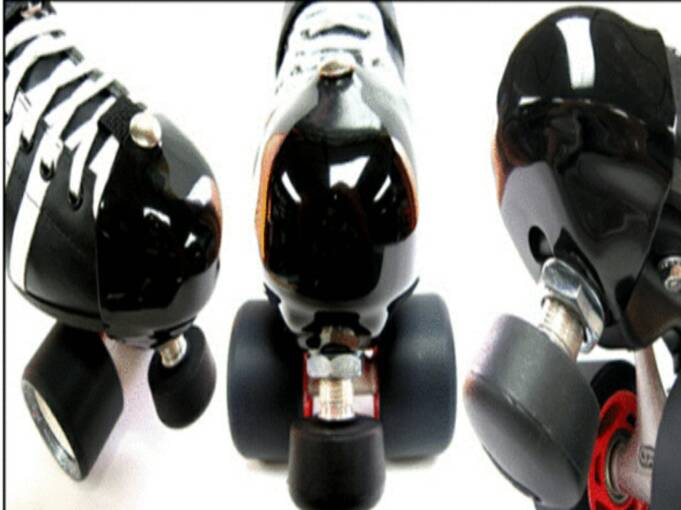 The future of a new roller derby group in Wausau is in question following revelations that the group's founders have used white supremacist and neo-Nazi symbols as part of the league's publicity efforts.

Jimi Van Zante, 39, has a large tattoo of a swastika on his arm, and his personal MySpace page bears many white power symbols, including boots with white laces and an image of the neo-Nazi punk rock band Skrewdriver. His name on MySpace is "TrueGrit Skinhead."

The couple denies that they are part of an organized skinhead group, and they say their personal beliefs are separate from the roller derby league. But as the group readies for its first match Friday at Merrill's Smith Center, many of the community "sponsors and supporters" that the league had listed on its Web site are growing reluctant to associate themselves with a group that is using Nazi symbols.

At least two members of the group already have left because of the Van Zantes' associations. And following inquiries from the Daily Herald, organizers took down from their Web site the list of community supporters, many of whom had not been informed that they were being listed there. One of the businesses listed as a supporter was the Wausau Daily Herald.

Beth Sherwood, 27, of Wausau is the captain of one of the league's two teams. She said she was not aware until recently of the Van Zantes' political views -- views she said could cause the league to collapse.

"We did not know this going in, and we do not condone or support this kind of philosophy," said Sherwood, who said she was speaking for herself and other skaters with whom she had communicated.

Sherwood said she is planning an emergency meeting with other league members to discuss whether they would participate in Friday's match.

Blair Van Zante wears an armband bearing the number 88 as part of her roller derby uniform -- a number of great significance among white supremacists as a code word for "Heil Hitler." (The eighth letter of the alphabet is "h.")

Blair Van Zante said she did not know that the number had that meaning and she "absolutely" did not choose it for that reason.

"There are eight bearings on each skate. I have two feet," she said, by way of explanation. "When people started asking me if that was related (to white supremacy), I had to ask people, 'Can you explain to me what you're talking about because I do not know.'"

Blair Van Zante's explanation for her use of the number is not credible, according to Heidi Beirich, director of research at the Southern Poverty Law Center, a group that tracks hate groups throughout the United States. Beirich said "88 is, like, the most well-known white supremacist slogan there is. It's used all the time by skinheads and Nazis. ... This is something that is ubiquitous in this world."

Both Jimi and Blair Van Zante, who works at Biggby Coffee, said they did not subscribe to Nazi or neo-Nazi beliefs.

"I could see how there could be a concern, because some people ... could feel like there may be guilt by association," Blair Van Zante said. "But we are just here to play a sport. People (shouldn't) feel like they're doing something wrong by being in the league, being associated with the league because of a symbol (tattooed) on the league manager.

"We're just here to play roller derby and put on a good show."

The group's charter, published on its Web site at www.rivervalleyrollergirls.org, states that the group "will not discriminate, nor tolerate discrimination based upon race, creed or religion, sexual orientation, personal politics or philosophy."

On its Web site and Facebook page, the organization had listed a number of local businesses under the heading "Our sponsors and local support." The list was removed from the site after a Wausau Daily Herald reporter began contacting the businesses.

Those businesses that would discuss their association with the league said they had supported the group's fundraisers by donating gift certificates to a raffle. All said they had no knowledge of any white supremacist ties by the founders and had not sensed racist undertones to the group's activities.

Most also said they would reconsider whether to have any business relationship with the group in light of this information. And most asked that their businesses' names not be used in a story in connection with the group.

One of the supporters listed was Roto-Graphic Printing in Wausau. Co-owner Joanne Hintz said her business did a paid printing job for the group, but added that "we really don't support them."

Another listed supporter was WJMT-AM 730 in Merrill. Jim Beem, station manager, said members of the group were interviewed on the air, and he characterized them as "bubbly and joyful." He doubted that the group had racist ties, and said he would not ban them from coming on the air in the future.

At least two women in the group, which has more than 40 members in all, already have left upon learning of the founders' use of skinhead symbolism. Many of the current and former members of the group contacted by the Daily Herald asked not to be named in this story.

The group's first public match is scheduled for Friday at the Smith Center in Merrill. Dan Wendorf, director of Merrill's parks and recreation department, said the group had rented the facility for the event.

Following the Friday match -- referred to as a "bout" -- there are eight other scheduled events listed on the league's Web site, going through Aug. 27.

In a November 2008 post on his MySpace page, Van Zante wrote that a "socially catastrophic double standard ... has been allowed to perpetuate, allowing for the possibility of Pride, Dignity and Self-determination for all BUT the White Race."

Van Zante said during an interview with the Wausau Daily Herald that he embraces the image of the swastika -- not as a Nazi symbol but as "a symbol of my heritage and my people." He vehemently stressed that his own beliefs do not include racism, prejudice or an affiliation with violence or genocide.

But he also advocates positions about race and society that mirror much of the rhetoric of the white supremacist movement.

"Do I believe in looking down on anyone else on this planet because of what their genetic makeup is? No," he said. "Do I believe there's a link or a continuity between myself and my ancestors? Yes. Do I believe that is worth preserving? Yes. Do all four of my kids have blue eyes? Yes. Did I do that on purpose? Yes."

"This league has nothing to do with skinheads," Van Zante said. "The fact that the founder of this league has been a skinhead for so long doesn't even matter. ... If people don't want to see the sport because they think it's bad, that's on them and they're an idiot."

Still, the league had posted certain icons and symbols to its Web site that Beirich of the Southern Poverty Law Center said are closely associated with white supremacy. An image of a Ouija board on the group's official site contained a swastika. That image was removed following inquiries from a Daily Herald reporter.

The site also includes an image of a Valkyrie, a figure from Norse mythology.

The Southern Poverty Law Center does not list any active hate groups in Wausau.

"I would say this," Beirich said. "If it's a skinhead-backed outfit, there's some cause for concern. ... You never know what type of propaganda might pop up."