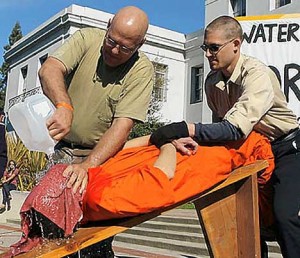 It's just so hard to take these conspiracy theorists seriously ... - AC

As the secrets about the CIA's interrogation techniques continue to come out, there's new information about the frequency and severity of their use, contradicting an 2007 ABC News report, and a new focus on two private contractors who were apparently directing the brutal sessions that President Obama calls torture.

According to current and former government officials, the CIA's secret waterboarding program was designed and assured to be safe by two well-paid psychologists now working out of an unmarked office building in Spokane, Washington.

Both men declined to speak to ABC News citing non-disclosure agreements with the CIA. But sources say Jessen and Mitchell together designed and implemented the CIA's interrogation program.

"It's clear that these psychologists had an important role in developing what became the CIA's torture program," said Jameel Jaffer, an attorney with the American Civil Liberties Union.

Former U.S. officials say the two men were essentially the architects of the CIA's 10-step interrogation plan that culminated in waterboarding.

Associates say the two made good money doing it, boasting of being paid a $1,000 a day by the CIA to oversee the use of the techniques on top al Qaeda suspects at CIA secret sites.

"The whole intense interrogation concept that we hear about, is essentially their concepts," according to Col. Steven Kleinman, an Air Force interrogator.

Both Mitchell and Jessen were previously involved in the U.S. military program to train pilots how to survive behind enemy lines and resist brutal tactics if captured.

But it turns out neither Mitchell nor Jessen had any experience in conducting actual interrogations before the CIA hired them.

"They went to two individuals who had no interrogation experience," said Col. Kleinman. "They are not interrogators."

The new documents show the CIA later came to learn that the two psychologists' waterboarding "expertise" was probably "misrepresented" and thus, there was no reason to believe it was "medically safe" or effective. The waterboarding used on al Qaeda detainees was far more intense than the brief sessions used on U.S. military personnel in the training classes.

"The use of these tactics tends to increase resistance on the part of the detainee to cooperating with us. So they have the exact opposite effect of what you want," said Sen. Carl Levin (D-Mich).

The new memos also show waterboarding was used "with far greater frequency than initially indicated" to even those in the CIA.

That contradicts what former CIA officer John Kiriakou, who led the Zubaydah capture team, told ABC News in 2007 when he first revealed publicly that waterboarding had been used.

He said then, based on top secret reports he had access to, that Zubaydah had only been water boarded once and then freely talked.

Kiriakou now says he too was stunned to learn how often Zubaydah was waterboarded, in what Kiriakou says was clearly torture.

"When I spoke to ABC News in December 2007 I was aware of Abu Zubaydah being waterboarded on one occasion," said Kiriakou. "It was after this one occasion that he revealed information related to a planned terrorist attack. As I said in the original interview, my information was second-hand. I never participated in the use of enhanced techniques on Abu Zubaydah or on any other prisoner, nor did I witness the use of such techniques."

A federal judge in New York is currently considering whether or not to make public the written logs of the interrogation sessions.

The tapes were destroyed by the CIA, but the written logs still exist, although the CIA is fighting their release.

A CIA spokesperson declined to comment for this report, except to note that the agency's terrorist interrogation program was guided by legal opinions from the Department of Justice.

Matthew Cole is a freelance national security reporter. His book, about the CIA rendition program, will be published later this year by Simon & Schuster.