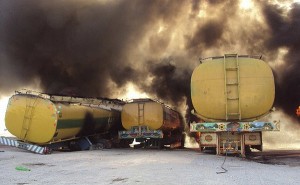 Lahore, Feb. 1 (ANI): At least 123 innocent civilians were killed in 12 US drone strikes in Pakistan’s tribal areas in January alone

The rapid increase in the US drone attacks in the Pakistani tribal areas bordering Afghanistan can be gauged from the fact that only two such strikes were carried out in January 2009, which killed 36 people.

The highest number of drone attacks carried out in a single month in 2009 was six, which were conducted in December last year. But the dawn of the New Year has already seen a dozen such attacks.

The unprecedented rise in the predator strikes with the beginning of the year 2010 is being attributed to December 30, 2009 suicide bombing in the Khost area of Afghanistan bordering North Waziristan, which killed seven CIA agents.

The consequent increase in US strikes, first in North Waziristan and then South Waziristan, specifically targeting the fugitive TTP chief Hakimullah Mehsud clearly shows that revenge is the major motive for these attacks. (ANI)