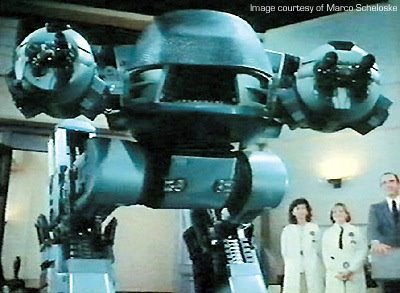 It could be a combination of 19th-century mechanics, 21st-century technology — and a 20th-century horror movie.

A Maryland company under contract to the Pentagon is working on a steam-powered robot that would fuel itself by gobbling up whatever organic material it can find — grass, wood, old furniture, even dead bodies.

That "biomass" and "other organically-based energy sources" wouldn't necessarily be limited to plant material — animal and human corpses contain plenty of energy, and they'd be plentiful in a war zone.

EATR will be powered by the Waste Heat Engine developed by Cyclone Power Technology of Pompano Beach, Fla., which uses an "external combustion chamber" burning up fuel to heat up water in a closed loop, generating electricity.

The advantages to the military are that the robot would be extremely flexible in fuel sources and could roam on its own for months, even years, without having to be refueled or serviced.

Upon the EATR platform, the Pentagon could build all sorts of things — a transport, an ambulance, a communications center, even a mobile gunship.

In press materials, Robotic Technology presents EATR as an essentially benign artificial creature that fills its belly through "foraging," despite the obvious military purpose.