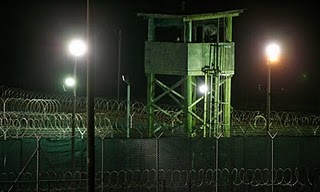 Camp Delta at the US naval station in Guantánamo, Cuba. A joint US/UK military force is reputed to have detained hundreds of Iraqi and Afghan prisoners at the detention centre. Photograph: Chip Somodevilla/Getty Images

A group of MPs is suing the CIA in the American courts in an attempt to force the agency to hand over information about Britain’s secret involvement in its extraordinary rendition programme.

In a case thought to set a legal precedent, the group, led by Conservative MP Andrew Tyrie, is to file a complaint in a district court in Washington tomorrow seeking a judicial review of the agency’s failure to disclose the information.

The MPs from the all-party parliamentary group on extraordinary rendition have made requests to the CIA, FBI and the department of homeland security over the last 12 months, under US freedom of information legislation, seeking more information about Britain’s role in rendition.

Hundreds of pages of documents have been disclosed but Tyrie said the specific information he requested had not been revealed. “The current drip-drip of information on rendition is hugely damaging. To achieve closure on rendition we need disclosure. It is in everyone’s interests that the truth on the US rendition programme comes to light. Bringing this litigation against the CIA, department of defence, department of justice, and other US government agencies, represents a globalisation of accountability for two of the world’s leading democracies. I hope that this groundbreaking litigation will lead to comprehensive disclosure in the US. Only then can we give the public confidence that we have got to the bottom of rendition and British involvement in it.”

The MPs want to learn more about the use of British airports and airspace, about agreements between the US and the UK on rendition, the use of Diego Garcia, a British territory in the Indian Ocean, and about the transfer of detainees from British to American hands. They have also demanded information about specific detainees, including two rendered through Diego Garcia, and others whom British special forces in Iraq handed over to US forces, and who were then flown to Afghanistan.

The MPs have submitted Freedom of Information Act requests to UK government departments. Most are now with the Information Commissioner’s office, pending appeals against the government’s refusal to disclose the information.

Tyrie has made a series of allegations about Britain’s involvement in the programme since he established the all-party group four years ago: he claims that the UK has facilitated rendition; that Diego Garcia was used for rendition; and that British troops have been involved in the process. “Each allegation was categorically denied,” he said. “Each has subsequently been admitted.”

In September 2005 the Guardian reported that aircraft involved in the CIA’s rendition programme had flown into the UK at least 210 times since the al-Qaida attacks in the US four years earlier.

Three months after that report, the then foreign secretary, Jack Straw, told the Commons foreign affairs committee: “Unless we all start to believe in conspiracy theories and that the officials are lying, that I am lying, that behind this there is some kind of secret state which is in league with some dark forces in the US and also let me say, we believe that secretary [Condoleezza] Rice is lying, there simply is no truth in the claims that the United Kingdom has been involved in rendition, full stop – because we have not been, and so what on earth a judicial inquiry would start to do I have no idea.”

Straw and Tony Blair also denied that any rendition flights landed on Diego Garcia. In February last year David Miliband, the foreign secretary, said they had.

After the government repeatedly denied that British forces in Iraq had been involved in rendition, John Hutton, who was defence secretary, admitted this year that they had; he also disclosed that two cases were detailed in documents sent to Straw and Charles Clarke.

While the government has now admitted to involvement in a small number of rendition cases, there is evidence that British troops in Iraq and Afghanistan have been involved in many more.

Last year Ben Griffin, a former SAS member who served in Iraq, said a joint US/UK task force detained “hundreds if not thousands” of people who were then kept at Guantánamo, Bagram and Abu Ghraib. Griffin said a senior officer expressed concern that the SAS squadron “were becoming the secret police of Baghdad”. He said that the task force had broken international law, contravened Geneva conventions and disregarded the UN convention against torture, and that ministers must have known that British soldiers The defence ministry responded by obtaining an injunction to silence Griffin.

Previous Article
Inside the Military Media Industrial Complex: Impacts on Movements for Peace and Social Justice
Next Article
USAID Officer Arrested with Terrorists in Islamabad