The Story of Aspirin

" ... The credit for finding the chemical composition of aspirin should rightfully go to Arthur Eichengrün who, in 1897 discovered aspirin. ... However, the poor man was never given the credit for discovering aspirin as he was a Jew and the rise of Nazis had already begun in Germany. ... " 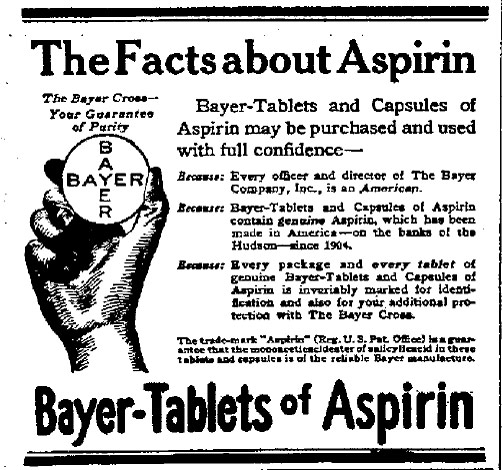 "Science is a kind of glorified tailoring enterprise, a method for taking measurements that describe something - reality - that may not be understood at all….."  -- Michael Crichton

Aspirin, known to us for more than three hundred and fifty years, was discovered serendipitously by Europeans. Peruvians in the 15th century, when malaria was rampant there killing millions, were looking for a cure. Peruvians believed that God would give the medicine where he gives the disease. They took to the forests and found a beautiful white tree whose bark’s decoction cured malaria. As their then Vice Roy’s wife, Cinchona, was very beautiful they named the tree after her as Cinchona tree. Europeans became jealous and they took the bark of their white tree and got the decoction which promptly brought the temperature down but people still died of malaria.

Cinchona bark had quinine and the medical world got several other drugs like quinidine for the heart etc from the same bark. But the Willow bark from Europe had acetyl salicylic acid which is a good anti-pyretic but has no antibiotic properties. "Extracts of willow were traditionally used in folk medicine and as early as 400 BC the Greek physician Hippocrates recommended a brew made from willow leaves to treat labour pains.

Later in 1763 an English clergyman, Reverend Edward Stone carried out the first proper scientific study of the herbal medicine when he described the benefits he observed after giving ground up willow bark to 50 parishioners suffering from rheumatic fever."

The credit for finding the chemical composition of aspirin should rightfully go to Arthur Eichengrün who, in 1897 discovered aspirin. He was brilliant and was a prolific writer with 40 patents to his name. He was made the head of pharmaceutical research at Bayer’s for this discovery. However, the poor man was never given the credit for discovering aspirin as he was a Jew and the rise of Nazis had already begun in Germany by then. It was a man by name IG Farben who in 1933 made up a story that a Nazi, Felix Hoffman, who was assistant to Eichengrün when the latter discovered aspirin, was the real hero and Bayer to this day maintains that Hoffman was the discoverer. By that time Nazis had come to power in Germany. Bayer, however, was kind to use their influence with the Nazis to see that Eichengrün got the best concentration camp with his own room there!

Despite being there for more than 350 years, the medical science does not even now know what dose of aspirin is good for what disease? In a beautiful article in the British Medical Journal in the 70s Late Professor John Mitchell had wondered as to what dose of aspirin is good for what disease, if ever; with the title What Dose Aspirin? Mitchell’s predictions have come true now. In fact, at one stage aspirin became so famous that for every ill this was prescribed. Along the way newer and newer side effects were reported like Rye’s syndrome in children who are given aspirin to reduce fever. Up until recently, doctors used to advise every human being past age of forty to have a baby aspirin (75 mg) daily to avoid heart attack.

Aspirin got incorporated into the much advertised "poly pill" sold as a prevention for all killer diseases, although even at that time doubts were cast on aspirin’s good effects or the absence of it. Latest audits have shown that instead of preventing heart attacks, a daily baby aspirin increases the risk and death from heart attacks and also increases the risk of fatal cerebral haemorrhage (brain attack)! Many doctors do not get to know these results for quite some time and the patients still keep getting the drug.

How does aspirin work to have its effects on the human system remained a mystery till very recently when in 1970 a Brutish scientist, Professor John Vane discovered that it blocked an enzyme needed to the production of a hormone, prostaglandins, involved in multiple bodily functions. It was as recently as 1972 that Sir John Vane got his Nobel Prize for discovering the way aspirin works in the human system.

The various milestones were accessed from the Aspirin Foundation.

400 BC In Greece Hippocrates gives women willow leaf tea to relieve the pain of childbirth.

1763 Reverend Edward Stone of Chipping Norton near Oxford gives dried willow bark to 50 parishioners suffering rheumatic fever, describes his findings in a letter to the Royal Society of London.

1823 In Italy the active ingredient is extracted from willow and named salicin.

1838 Salicin also found in the meadowsweet flower by Swiss and German researchers.

1853 Salicylic acid made from salicin by French scientists but it is found to irritate the gut.

1897 In Germany, Bayer's Felix Hoffmann develops and patents a process for synthesising acetyl salicylic acid or aspirin. First clinical trials begin. This is the official version but the truth is given above.

1914 International trade in pharmaceuticals interrupted by the outbreak of World War I. Australian pharmacist G. R. Nicholas wins a competition to find a new way of producing aspirin.

1974 First evidence of aspirin's effects in preventing heart attacks: Professor Elwood. This has undergone sea changes now in that long term use of aspirin might, in fact; increase the risk of heart attack and gastrointestinal bleeds.

1989 US researchers report preliminary study suggesting that aspirin may delay the onset of senile dementia 1994 - Professor Henk C S Wallenburg of Rotterdam shows that aspirin may help in treating pre-eclampsia in pregnant women.

The story of aspirin is full of important lessons for medical researchers. More than three hundred and fifty years of use and more than 2400 years of our awareness of its existence only now are we discovering the new dangerous side effects. What would be the state of drugs discovered a couple of years earlier having had just a short term RCT to back their claims and also to be sure of their side effects? Modern medicine’s reductionistic molecules go through these stages of ups and downs in the drug’s chequred history. Although pills initially thrill they could also kill in the long run!

"Reality is always greater — much greater — than what we know, than whatever we can say about it." -- Michael Crichton.