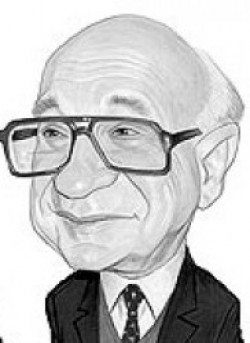 With the death of Milton Friedman a couple of weeks ago and the overdue death of Augusto Pinochet somewhat appropriately on International Human Rights Day last Sunday, the debate over Friedman's and Pinochet's economic policies in Chile during the 1970s and 1980s has been a prominent topic this week.

While I have already made a couple of comments, given the confusion over the issue I feel I should expound a little bit, utilizing a couple of valuable articles on the subject. I was especially inspired to do this after reading the egregious editorial (apparently by Fred Hiatt) in the Washington Post yesterday. This editorial is the very worst example of journalism, clearly illustrating the vapid state of American media and is just one more of the countless examples disproving the dimwitted claims of liberal bias (See here, here and here for comments on the article). Here are some of the appalling, illogical and nonsensical claims:

...It's hard not to notice, however, that the evil dictator leaves behind the most successful country in Latin America. In the past 15 years, Chile's economy has grown at twice the regional average, and its poverty rate has been halved. It's leaving behind the developing world, where all of its neighbors remain mired...

...Like it or not, Mr. Pinochet had something to do with this success. To the dismay of every economic minister in Latin America, he introduced the free-market policies that produced the Chilean economic miracle -- and that not even Allende's socialist successors have dared reverse...

... In "Dictatorships and Double Standards," a work that caught the eye of President Ronald Reagan, Ms. [Jeanne, former US ambassador to the UN] Kirkpatrick argued that right-wing dictators such as Mr. Pinochet were ultimately less malign than communist rulers, in part because their regimes were more likely to pave the way for liberal democracies. She, too, was vilified by the left. Yet by now it should be obvious: She was right.

What is perhaps most outrageous is how the editorial makes claims about the "past fifteen years" when Pinochet has been out of office for 16 years. Additionally the offensive claptrap about right wing brutal murderers leading somehow to liberal democracies - as opposed to left wing dictatorships - is remarkably ahistorical. Many Eastern European dictatorships are now functioning democracies while the editorial fails to note that before Pinochet's military coup Chile had one of the longest functioning democracies in Latin America and the president that Pinochet overthrew, Salvador Allende, had been part of electoral politics since the beginning of his career.

But what I really want to go into here is the claim of an economic miracle in Chile in the late 1970's brought on by Pinochet and the "Chicago Boys" implementation of an extremely rigid and doctrinal version of neo-liberalism.

(Much of this post relies on information from the outstanding article (PDF) "The Uses of Chile: How Politics Trumped Truth in the Neo-Liberal Revision of Development," by Public Citizen, along with Greg Palast's article, "Tinker Bell, Pinochet and The Fairy Tale Miracle of Chile" and Steve Kangas's piece, "Chile: The Laboratory Test")

To term whatever economic success Chile has had post-Allende (1973) as proof of the success of neo-liberalism can only be termed generously as a wild mischaracterization. Let's look at some figures.

From the 2005 UN Developmental Report we see that Chile finishes very near the bottom in terms of income inequality at 113th place just a few places above Nambia (Interestingly the United States is also near the bottom in 92nd place). Real wages fell consistently during Pinochet's rule while still today there are periods of high unemployment due to the seasonal nature of its export orientated primary product economy. From 1970 to 1989 labour's share of the national income fell from 52.3% to 30.7% while real wages declined by 40% under military rule.

In the typical manner of right wing ideologues who never have to worry about where their next paycheque will come from, the Chicago Boys purposely followed policies that kept unemployment high so as wages would stagnate, profits would remain high and there always would be a healthy (irony intended) supply of underpaid workers willing to work for whatever they could get. Unemployment averaged 15.7% during the Pinochet period, the worst in all of Latin America.

Poverty reduction did not occur until the 1990s when the pure neo-liberalism previously practiced was abandoned. By 1989 the poverty rate was 41.2% with those at the indigent level equaling a third of this total.

Palast notes, "In 1970, the daily diet of the poorest 40 percent of the population contained 2,019 calories. By 1980 this had fallen to 1,751, and by 1990 it was down to 1,629." It was policies that were directly at odds with ones promoted by Friedman et al, including increased taxes and a great increase in social spending that led to a reduction of the poverty rate to less than one in five in the 1990s.

Ninety per cent of Chile's exports have been primary products (i.e. natural resources) which, along with having a much lower value-added component and whose extraction is often very detrimental to the environment, are by their very nature, non sustainable. The Public Citizen article cites one study which estimates that the supply of the very basis of Chile's export economy, copper, could be exhausted by 2020. In terms of industrialization, manufacturing in Chile has fallen from 30% in the 1970s to a low of 18% in 2000.

Close to 200 industries were privatized by Pinochet. Public Citizen, citing another study, comments on the so-called efficiency of unregulated privatized utilities in Cuba:

The study goes on to show that, contrary to the conventional neo-liberal "wisdom," the privatized utilities that were the most strongly regulated post-privatization experienced larger improvements in efficiency and profitability than those that were less regulated - showing that regulations is not incompatible with improvements in corporate performances." [note: the Public Citizen piece gives good examples of the dangers rampant in privatizing such sectors as water, education, health and the pension system)
Ironically though (or perhaps not), the one sector vital to Chile's economic success, the export of copper, has remained in state hands. As Palast notes,

Copper has provided 30% to 70% of the nation’s export earnings. This is the hard currency which has built today’s Chile, the proceeds from the mines seized from Anaconda and Kennecott in 1973 - Allende’s posthumous gift to his nation.

Agribusiness is the second locomotive of Chile’s economic growth. This also is a legacy of the Allende years. According to Professor Arturo Vasquez of Georgetown University, Washington DC, Allende’s land reform, the break-up of feudal estates (which Pinochet could not fully reverse), created a new class of productive tiller-owners, along with corporate and cooperative operators, who now bring in a stream of export earnings to rival copper. “In order to have an economic miracle,” says Dr. Vasquez, “maybe you need a socialist government first to commit agrarian reform.”

It is often the record of economic growth, especially between the years 1978 to 1981 which the neo-liberalists hang their hat on. It was Friedman himself termed this period the "economic miracle in Chile," as Chile averaged 6.6% growth per year. (By the way growth in Venezuela the last two years has been around 9-10%. Funny you don't hear a lot about the Venezuelan economic miracle in the North American press) But the problem with conclusions like this, besides overlooking a host of other economic and social issues and indicators, don't take into account, as Kangas succinctly points out, the difference between actual growth and potential growth nor the expanding, yet cyclical nature of world economies. His words:

Two economic concepts are useful to understand this phenomenon. The first is that the economy grows in the long run, as both the population expands and each worker produces more per hour, thanks to improving technology and efficiency. This long-term growth experiences mild swings in the form of recessions and recoveries, of course. But if the economy grows in the long run, then deep recessions are going to be followed by even steeper recoveries.

During a recession, actual productivity drops as millions of workers are laid off and factories sit idle. But all the potential productivity is still there. During a recovery, actual productivity climbs closer to its potential, as millions of laid-off workers return to empty factories. This gives the appearance of growth — and we should note that this type of growth is relatively quick and easy to achieve. But what happens when all the workers have returned? Then any further growth will have to involve potential growth — that is, the construction of factories and the birth of new workers. As you might imagine, this type of growth is considerably more difficult to achieve.

So this is all that happened that during Chile's "Economic Miracle" — laid-off workers returned to their old jobs. When you take both the recession and recovery into account, Chile actually had the second worst rate of growth in Latin America between 1975 and 1980. Only Argentina did worse. [see here for his notes on this]

Public Citizen's article also details policies enacted in Chile which are in fact directly contrary to the tenets of neo-liberalism including:

Of course, the structural adjustment programmes and the slashing of public spending as traditionally advocated by the the IMF would make most of these undertakings impossible. The Free Trade Agreement between the U.S. and Chile has put many of them at risk, including anything that can be termed an economic subsidy or any of the capital controls instituted by the Chilean government. (Not to mention the elimination of environmental regulations).

Finally one other note. In the last couple of days many have stated or at least acknowledged that while there is little doubt in regards to the bloodthirsty nature of Pinochet's regime there is much debate over the economic success of Pinochet's policies. (Excluding of course the neanderthal and Pinochet apologist Fred Hiatt at the Washington Post who seeks to downplay Pinochet's massive human rights violations). However, in many ways the violations of the human rights and the neo-liberal economic policies of shook therapy and "structural adjustments" taken to the extreme in Chile can not treated as distinct issues. As Kangas states:

Shortly after the 1975 conference, the Chilean government initiated the Economic Recovery Program (ERP). The first phase of shock therapy was reducing the money supply and government spending, which succeeded in cutting inflation to acceptable levels. However, it also caused unemployment to rise from 9.1 to 18.7 percent between 1974 and 1975, a figure on par with the U.S. Great Depression. Output fell 12.9 percent — making this Chile's worst recession since the 1930s. (2)

Meanwhile, to prevent the political consequences of such a shock, the Pinochet regime began cracking down on potential opposition leaders. Many just "disappeared." ... suffice to say, workers "accepted" this austerity program at gunpoint.

To sum up; unadulterated neo-liberalism was a catastrophic failure in Chile, making the rich much richer, the poor much poorer and was paid for with the blood of those brave Chileans that resisted. To offer up the tripe that appeared on the Washington Post's editorial page yesterday is an utter disgrace.