" ... The French authorities had been criticized for being extremely reluctant to share information during the investigation, and the report was considered to have been issued before all the possibilities had been explored. These included testimony from former Concorde pilots concerning unbalanced weight distribution in the fuel tanks and mis-aligned landing gear. ... " 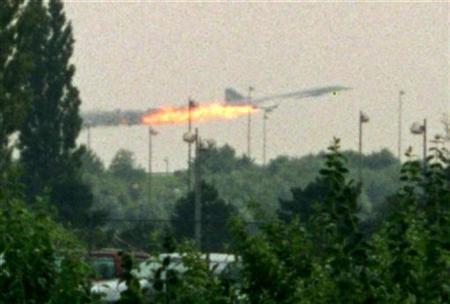 Yesterday's French court decision to find Continental Airlines solely responsible for the Concorde disaster which killed 113 people in 2000 leaves many questions unanswered, including that of a possible French government and aviation interest cover-up.

Air France Flight 4590 took off on July 25, 2000 from Charles de Gaulle airport in Paris bound for John F. Kennedy airport in New York. The plane was on fire as it left the runway and the flight lasted just under two minutes before the plane banked steeply and rolled over, crashing onto a hotel in Gonesse, near Paris. All 109 passengers and crew were killed, as were four people on the ground. The majority of the dead were German tourists.

The initial inquiry report by France's air accident investigation authority the Enquiry and Analysis Bureau (BEA) was issued on 14 December 2004 and it blamed foreign object damage for the accident, claiming that the Concorde had run over a titanium strip which had fallen onto the runway from a Continental Airlines plane. This is said to have resulted in a tire burst, with debris thrown up from the tire puncturing the left wing's main fuel reservoir and causing a massive leak which was ignited by an engine.

The trial began at the beginning of this year, with Continental Airlines, John Taylor, a welder who worked for Continental at the time of the crash and his supervisor, Stanley Ford, being accused of involuntary manslaughter. Henri Perrier, the head of testing of the Concorde program before becoming its director and Jacques Herubel, the plane's former chief engineer, were also accused, as was the former head of France's civil aviation body Claude Frantzen.

The judge decided yesterday that Continental was responsible for the disaster and the company was fined €200,000 and €1m in damages. Taylor was given a 15-month suspended prison sentence for fabricating the titanium strip, which did not meet industry standards. Meanwhile, Perrier, Herubel and Frantzen were all cleared of involvement in the crash.

Continental's lawyers have said they will appeal the decision, saying that it "only protects French interests."

Continental's lawyers are right to do so because there are many good reasons to do so. The sole-cause theory contained in the initial BEA report was highly criticized at the time it came out. The French authorities had been criticized for being extremely reluctant to share information during the investigation, and the report was considered to have been issued before all the possibilities had been explored. These included testimony from former Concorde pilots concerning unbalanced weight distribution in the fuel tanks and mis-aligned landing landing gear which was said to have resulted from faulty maintenance. This, they said, suggested that the plane may have tried to take off below its minimum take-off speed.

However, almost all of the pilots' statements were judged not to be receivable during the trial, and the same decision was applied to statements from firefighters and others on the ground who saw the take-off and had stated that the fire broke out before the plane ran over the strip. The court did not take them into account because they had been rejected during the 10-year investigation that preceded it. Also, Continental and other witnesses all testified before the trial that the runway was in bad condition at the time of the accident due to a lack of refurbishing yet that it was refurbished very soon after it, leading to suspicions that the French authorities were trying to cover up evidence.

It is also to be wondered why no attention was paid to the fact that it was widely believed within the airline industry that the disaster was 'a disaster waiting to happen' because of repeated refusals by Air France over the years to look for and implement ways of reducing the risk of an accident due to exactly what it claimed happened during the accident in Paris, namely the rupture of a fuel tank caused by debris thrown up by burst tires, tires moreover which were known not to be up to standard.

But the Concorde crash investigation and trial is not the only incident which is raising eyebrows, and this is not the first time that accusations of collusion between the BEA, Air France and - more recently - Airbus Industries, which is the biggest supplier of planes to Air France, have surfaced, particularly as these organisations are closely linked to the state.

The 1988 crash of an Airbus A320 into trees during a low level fly-past at an air-show in Habsheim France just before its commercial deployment was blamed on the pilots the very next day. Designating the cause of an airliner crash in 24 hours is an unprecedented event to say the least, particularly when a pilot does not accept responsibility immediately. The pilot has always claimed that the plane's revolutionary fly-by-wire controls did not respond correctly as he executed his fly-by and he has been trying to clear his name ever since without success.

The enquiry has never been reopened despite persistent claims that the BEA, Airbus and Air France covered up the reasons for the crash to save the plane's financial future. The plane's systems were modified after the crash however.

And there is still the mystery surrounding the AF447 disaster of June 1 last year over the Atlantic ocean, in which an Air France Airbus A330-200 went down, killing all 216 passengers and 12 crew members aboard. The reasons for that crash have never been found due largely to the absence of the planes Flight Data Recorder and Cockpit Voice Recorder, both of which have not been recovered because they are under thousands of meters of water, which is making the search for them very difficult.

Questions here have been asked about why autopsy reports have still not been released and why Air France and Airbus did not implement recommended changes to the plane's Pitot tube airspeed measuring system, which the DEA says is the major culprit. The families of victims have begun court action to pressure the BEA to issue more details.

Suspicions of a long history of collusion within the French aeronautics industry in general, a hastily issued initial report, a huge swath of rejected statements and evidence which contradicted the DEA's report which was backed up by Air France, plus the court's refusal to reconsider them, as well as well-known prior problems with Concorde's tires which would incriminate Air France even if the titanium strip was the element which completed the sequence of events leading up to the accident, these are the reasons which are leading Continental's lawyers to appeal and to say in thinly-veiled terms that the French aeronautical industry may well be involved in a cover-up.

This opinion article was written by an independent writer. The opinions and views expressed herein are those of the author and are not necessarily intended to reflect those of DigitalJournal.com