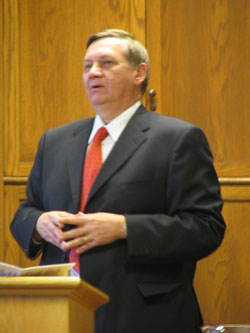 In announcing the appointment, Hayden described Sulick as "a familiar figure to many of you" and "a sea-soned operations officer" who "earned a reputation for superior tradecraft and sound judgment."

In November 2004, Stephen R. Kappes, then CIA deputy director of operations, the top spy position, and Sulick, then his deputy, became involved in a controversy involving leaks to the media, which pitted them against members of Goss's senior staff who had come with the congressman to the agency from the House Permanent Select Committee on Intelligence.

Sulick reportedly argued against transferring a senior officer who was accused of the leak. As events escalated, Kappes and Sulick resigned. ...

http://oraclesyndicate.twoday.net/stories/4411697/
•••••••••
THE TRUE STORY OF SULICK'S SUDDEN DEPARTURE FROM THE CIA UNDER GOSS

From The Duh! Files
Strato-Sphere Blog

... When Goss came to the CIA, he brought this Patrick Murray. They wanted to promote Foggo to the #3 job, but he had some problems with some information in his file.

When Murray saw the file, he told Foggo, “if this gets out, you will never get the job.”

Murray told a CIA lady named Mary Margaret Graham that if the derogatory information in Foggo’s file leaked that she would be fired.

There was a big fight and namecalling and throwing things.

Goss suggested moving Sulick to NYC but Kappes refused and Graham, Kappes and Sulick all quit.

Now, Mary Margaret Graham is working in a high position for Negroponte, Kappes is probably coming back with Hayden.

These were the so-called “liberal leakers.”

The Murray guy, who also tried to make Kappes declassify and leak information derogatory to Democrats, will be the next to go.

Patrick Murray was protecting and promoting Foggo, who was probably a huge crook who used his job to give contracts to his buds.

Murray was not an intelligence expert; he was a Republican operative who tried to use the CIA against his party’s political enemies. And he protected Foggo, who is probably a huge crook, or worse.

Now I don’t think that these Republicans served their President, and I think that Bush knows this. that is why Kappes is in and Foggo is out.

Look for Murray to go down. To me, his protection of Foggo looks very suspicious. ... That’s why Goss is leaving. Now maybe this was some big trap that Goss helped set, and maybe he was part of it, or maybe he was clueless. I don’t know.

But Kappes was not a left-wing leaker. That is all big fat lies from some crooks who didn’t want to get caught with their hands in the cookie jar. So who was the one loyal to the President? Kappes. Not Foggo or his protector Murray. They pretended to be loyal so they could use their position to be corrupt. ...

After a twenty-five year career in the CIA, Michael Sulick retired in March 2005 as the Associate Deputy Director for Operations (ADDO), the number two position in the nation's clandestine service. As ADDO, Mr. Sulick was responsible for managing the operational direction of global covert intelligence operations on terrorism, weapons proliferation, counterintelligence and regional and country-specific issues.

CIA Chief in Russia and Poland

A specialist in Russia and Eastern Europe, Mr. Sulick served as CIA chief in Russia and Poland where he directed intelligence operations and managed relationships with foreign intelligence services during an era of dramatic post-Cold War change and regional transition to democracy. In 1991 he was the first CIA officer to set foot in the Soviet republics to forge new relationships immediately after the coup against Soviet leader Gorbachev crumbled. In the early years of his career, he conducted espionage operations at CIA field locations in Asia, Latin America and the former Soviet Union.

After returning from overseas, Mr. Sulick directed CIA's Central Eurasian Division, which is responsible for covert operations and liaison with foreign intelligence services in Russia, Eastern Europe and the former republics
of the Soviet Union. During that turbulent period he spearheaded intelligence support to US warfighters in the Kosovo conflict. After 9/11, he revitalized intelligence collection efforts to combat terrorism in the Balkans and Central Asia.

As chief of CIA counterintelligence, Mr. Sulick integrated counterintelligence into the CIA's strategy to support the global war on terrorism and fostered collaboration with the FBI that led to the exposure of some of the most damaging spies in American history.

A native of New York City, Mr. Sulick holds a Ph.D.in comparative literature from the City University of New York and an M.A. and B.A. in Russian Studies from Fordham University. He also served in Vietnam with the U.S. Marine Corps. For his CIA service Mr. Sulick has been awarded the CIA Clandestine Service Medallion, Director of Central Intelligence Medal from DCI George Tenet, the CIA Distinguished Career Intelligence Medal, and Poland's Presidential Order of Merit. He has written about terrorism in CIA's Studies in Intelligence and in the Los Angeles Times.