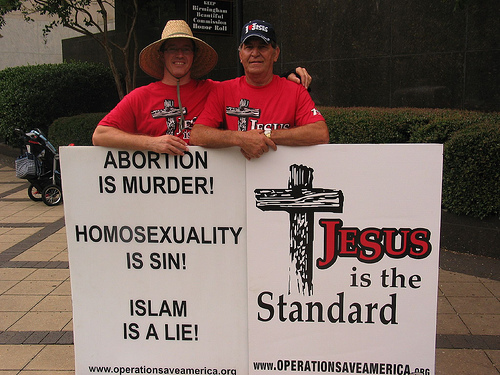 The litany of atrocities in this, the Season of Scapegoating, is long and vile: Qurans burned in East Lansing, Knoxville and San Francisco; a pipe bomb exploding in a Jacksonville, mosque; the stabbing of a Muslim cabdriver in New York City; graffiti in Reno: “Don’t Burn the Koran, Burn Muslims;” bricks tossed through mosque windows in Madera, California.

And then there are the activities of Operation Save America whose members have blocked mosque entrances and picketed Friday worship in Bridgeport, Connecticut, Charlotte, North Carolina, and Wichita, Kansas.

No longer content to work exclusively on restricting women’s reproductive options, OSA is now organizing against what they see as a trinity of evils: abortion, homosexuality, and Islam.   Their website makes the agenda clear: “We are asking God to cleanse us from the sin of bloodletting ushered in by Roe v. Wade. We added the homosexual flag and the Quran as we saw the rise of Islam, the normalization of homosexuality, and the continued shedding of innocent blood through abortion.”

Calling a Wichita mosque “the gates of Hell,” a group led by pastor Mark Holick—who was eventually arrested—not only blocked mosque doors last month, but also shoved copies of an anti-Muslim DVD at would be mosque-goers. Holick and followers saw the action as a simple proclamation of “the love and truth of Jesus Christ;” congregants saw it as harassment.

Predictably, OSA leaders reveled in the media firestorm caused by their activities and then quickly took their road show to Bridgeport.  Bridgeport is Connecticut’s largest city, home to approximately 140,000 people, an increasing number of whom are Muslim. Standing outside the Masjid An-Noor, OSA member Becky Puckett of Sachse, Texas told the Connecticut Post newspaper that, “As followers of Jesus, we must proclaim that Islam is a lie.”

Bridgeport has long been an OSA stronghold, with constant pickets at Summit Medical Center and periodic “truth vans—complete with billboard-sized pictures of blood-covered baby limbs—parked near Central High. In fact, the anti-abortion presence in The Park City got so bad in the late 1990s that the Department of Justice intervened, charging protester Stanley G. Scott with violating the Freedom of Access to Clinic Entrances Act for “using signs as a battering ram to block Summit volunteers who escort patients into the clinic.” 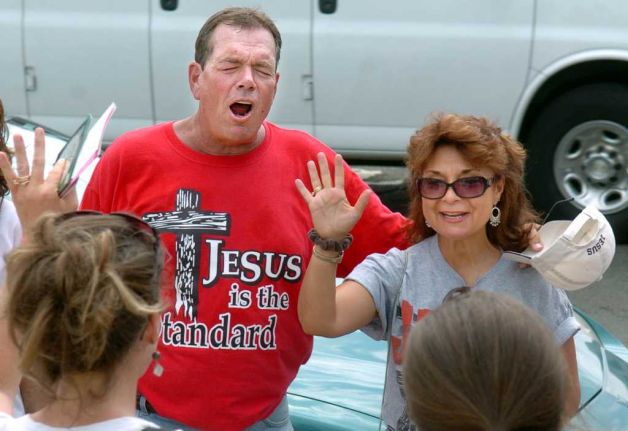 Rev. David Rowe, pastor of the Greenfield Hill Congregational Church—a parish that has never taken a stand on abortion—learned about OSA’s foray at Masjid An-Noor from the Greater Bridgeport Council of Churches and was immediately outraged. Later, when he heard that OSA was holding a mid-August press conference, he decided to attend. “I started talking to a woman with a sign that said, ‘Jesus is the only way,’ ” he begins.  “The tone of our conversation was civil but the content on her end was not. I asked her if she’d ever read the Quran or attended Muslim worship. She said,‘No,’ but then cited Quranic verses she thought gave Muslims the right to kill Jews and Christians. I asked her how confrontation during worship fit into the idea of love that is central to the Gospel. Her response was that it is loving to tell Muslims that Jesus is coming.”

Masjid An-Noor is the largest of three mosques in Bridgeport and has been a center of Muslim life in Fairfield County for more than 15 years. Friday services typically draw nearly 700 people, Mongi Dhaouadi, Executive Director of the Connecticut chapter of the Council on American-Islamic Relations, tells me. “A lot of Pakistanis attend services there and even though Bridgeport resident Faisal Shahzad, the so-called Times Square bomber, had not, that’s probably why OSA chose this particular site,” he continues.

Factor in the frenzy over the building of the Park51 Islamic Center in lower Manhattan, the anniversary of 9-11, and long-standing uneasiness over demographic changes in the US—visitors to Bridgeport are quick to note the unprecedented influx of Muslims over the last 20 years--and it is not surprising that scores of people have jumped on the anti-Islam bandwagon.

“The Muslim population in Bridgeport grew thanks to the aggressive recruitment of students by the University of Bridgeport, most of whom stayed in the area after they graduated,” Dhaouadi continues. UB is owned by Rev. Sun Myung Moon’s Unification Church. Beginning in 1992 the college sought to boost enrollment by offering $10 million a year in financial aid to international students, many of them Muslim.  Many UB graduates currently attend services at Masjid An-Noor.

Dhaouadi calls OSA’s presence at the mosque “ugly,” but says that the groups’ belligerent presence has led to numerous well-attended interfaith activities, from end of Ramadan meals to vigils in support of cross-cultural respect. “We’ve been proactive in pushing back the hatred,” he says. “There has been an outpouring of community support from people who consider OSA an enemy of people of faith.”

While the mosque and Summit Medical have not been in contact, the Greater Bridgeport Council of Churches issued a widely-circulated statement shortly after OSA came to town.  Signed by 37 Protestant, Greek Orthodox and Jewish clergy, it states that: “OSA demonstrates a fundamental lack of understanding for the teachings of Islam…They reveal a lack of tolerance for pluralism and diversity.” The group is calling for interfaith understanding and promises to promote co-existence and dialogue.

The statement may already have had an impact. Despite pledges to the contrary, OSA has not returned to Masjid An-Noor—or other mosques--since it was issued.