Denial of the Denial, or The Battle Under Auschwitz The Debate on the Geopolitics and the Demography of the Holocaust 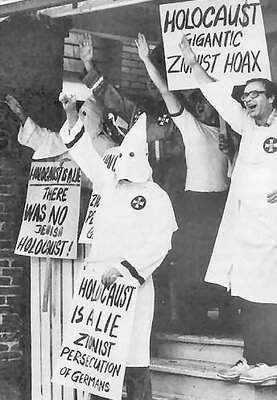 MOSCOW, Oct 16, 2008 /PRNewswire via COMTEX/ -- A new book, Denial of the Denial -- the first work in Russia to refute deniers' claims that the Holocaust was a hoax -- was announced by Alfred Kokh and Pavel Polian at a press conference today. By using hard evidence instead of silent disdain, this landmark book counters deniers' allegations with scientific proof - the raw data and fact-based, verifiable evidence that categorically establishes that the Holocaust did, in fact, take place. The publication will be available in bookstores in Russia in late October.

The book confronts a conflagration of neo-Nazi and anti-Semitic forces emerging in Europe and the Middle East -- specifically in Iran in the east, and Spain and France in the west -- where hostile attitudes toward Jews continue to rise steadily. This resurgence in anti-Semitic sentiment comes in concert with the passing of the last living survivors of the Holocaust, marking the end of a generation of brave souls whose first-hand accounts served as the primary testimony with which the sad truths of the Holocaust were first identified and verified.

"By addressing the deniers head-on, we are able to categorically repudiate their dangerous and spurious distortions and put the truth on the record once and for all," said Alfred Kokh, author and former deputy prime minister of Russia. "We decided to publish this book to respond finally to what should be a long-closed question. We tried to present as strictly as possible the demographic arguments of both the traditionalist scholars and the deniers, thereby modeling some semblance of discussion between them and most importantly between their arguments."

While the voice of Holocaust survivors quickly begins to fade away, another is gaining steam and threatens to take its place. Nowhere is this rhetoric more prominent than in Iran where President Mahmoud Ahmadinejad's virulent anti-Israel and anti-Semitic defamation, coupled with his un-abashed denial of the Holocaust, serves to fuel an already rapidly spreading fire among Muslim fundamentalists around the world. The only way to combat the convergence of these powerful anti-Semitic forces is to seize the real facts and use the proven data to strip the deniers of all legitimacy, all authority and therefore all potential to convince and influence others.

"We hope that this publication becomes a resource for others working in similar contexts," says Pavel Polian. "While anti-Semitism and Holocaust denial is an issue in Russia, the biased attacks that perpetuate this kind of hatred are likely to be encountered in other countries seeking the truth, the accountability and the evidentiary proof of past abuses. We hope that the lessons learned from this experience will strengthen such efforts in the future."

Denial of the Denial contains articles by:

The book is made up of three main parts and three appendixes. In part one, Alfred Kokh introduces the book in the Foreword, which is followed by Polian's article, "Denial and the Geopolitics of the Holocaust." In part two, the issues of evolution and the structure of the denier movement are examined through a collection of essays written by professional demographers, professional historians, and archivists and historians from Yad Vashem. In part three, Kokh and Polian return to conclude the book with Kokh's Afterword, followed again by Polian, who provides an overview of the demographic analysis of the Holocaust.

The book ends with three appendixes: the first is a bibliography of recommended reading from the editors; the second includes documents of the Soviet administration that attest to the horrible reality that liberators found upon arriving in Auschwitz and Birkenau; the third appendix brings the book to its close with a compilation table that shows nearly all of the many structural variations used in estimating the total number of Holocaust victims.