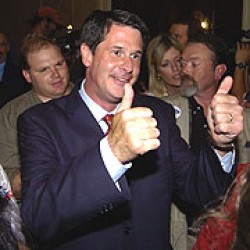 It has been a difficult two weeks for Sen. David Vitter. The former rising star of the Louisiana Republican Party now faces calls for resignation and is the butt of jokes from late-night comics.

Vitter admitted to a “serious sin” as his phone number showed up on the D.C. Madam’s call list. But he denied any involvement with the Canal Street Madam or any New Orleans prostitutes.

Vitter’s fate hinges on what additional information is uncovered about his sordid activities, making his political future unclear at best. No longer is Vitter seen as a GOP leader in the Senate, just weeks after garnering attention for his leadership in stopping the immigration bill. He was brushed aside by Rudy Giuliani’s presidential campaign and quietly marginalized, even though he holds the position as Southern regional coordinator. He certainly will not be considered for vice president by Giuliani or anyone else.

The sad truth is Vitter now brings too much baggage to any presidential ticket.

Vitter literally moved Jindal off the front pages, which infuriated many of his supporters.

Vitter’s move was payback for Jindal’s tepid statement offering prayers to the senator, yet signaling his disappointment with the sordid behavior. The Vitter insult will not be forgotten by the Jindal campaign anytime soon.

Although most state and national Republican leaders are officially and publicly expressing support for Vitter, they are very concerned privately about the impact on the party’s chances to take over the Governor’s Mansion and the state House this fall. For a few, the controversy has spurred a call to resign.

The first to issue the resignation alarm was Louisiana Republican State Central Committee member Vincent Bruno, who claimed he was initially contacted by a prostitute named Wendy Cortez alleging an affair with Vitter.

Bruno said Cortez visited him when he worked as a volunteer in the congressional campaign of former Gov. Dave Treen, who lost a heated 1999 race against Vitter. When questioned about those charges, Vitter called Bruno “a thug and a liar.”

Since the Vitter scandal began, Bruno has made the rounds of the local and national news stations calling for Vitter’s resignation or challenging the congressman to switch to the Democratic Party.

The UNO College Republicans and the Rev. Grant Storms, leader of the Christian Conservatives for Reform, also called for Vitter’s head. The reverend said conservatives need to be consistent and apply the same standards to Republicans and Democrats. “We asked (President Bill) Clinton to resign and (Rep. William) Jefferson to resign, so we need to say the same thing about Vitter,” Storms said