"Saudi Connection" to 9/11, per Big Media, was the BUSH Connection - Prince Bandar was Military Mentor to Both GHW and GW Bush - The Constantine Report
0 SHARES

American Terrorism » "Saudi Connection" to 9/11, per Big Media, was the BUSH Connection -- Prince Bandar was Military Mentor to Both GHW and GW Bush

"... No foreign diplomat has been closer or had more access to President Bush, his family and his administration than the magnetic and fabulously wealthy Prince Bandar bin Sultan of Saudi Arabia. ..." -- NY Times, 4-29-07

New allegations of Saudi involvement in 9/11

New York Times: [Moussaoui] said in the prison deposition that he was directed in 1998 or 1999 by Qaeda leaders in Afghanistan to create a digital database of donors to the group. Among those he said he recalled listing in the database were Prince Turki al-Faisal, then the Saudi intelligence chief; Prince Bandar Bin Sultan, the longtime Saudi ambassador to the United States; [Fox News Director] Prince al-Waleed bin Talal, a prominent billionaire investor; and many of the country’s leading clerics. ...

A Saudi Prince Tied to Bush Is Sounding Off-Key

By HELENE COOPER and JIM RUTENBERG 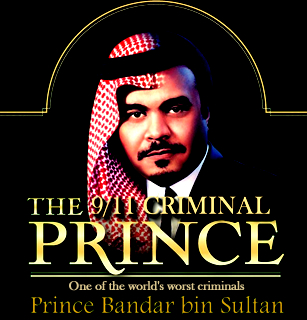 WASHINGTON — No foreign diplomat has been closer or had more access to President Bush, his family and his administration than the magnetic and fabulously wealthy Prince Bandar bin Sultan of Saudi Arabia.

Prince Bandar has mentored Mr. Bush and his father through three wars and the broader campaign against terrorism, reliably delivering — sometimes in the Oval Office — his nation’s support for crucial Middle East initiatives dependent on the regional legitimacy the Saudis could bring, as well as timely warnings of Saudi regional priorities that might put it into apparent conflict with the United States. Even after his 22-year term as Saudi ambassador ended in 2005, he still seemed the insider’s insider. But now, current and former Bush administration officials are wondering if the longtime reliance on him has begun to outlive its usefulness.

Bush administration officials have been scratching their heads over steps taken by Prince Bandar’s uncle, King Abdullah of Saudi Arabia, that have surprised them by going against the American playbook, after receiving assurances to the contrary from Prince Bandar during secret trips he made to Washington.

For instance, in February, King Abdullah effectively torpedoed plans by Secretary of StateCondoleezza Rice for a high-profile peace summit meeting between Prime Minister Ehud Olmert of Israel and the Palestinian president, Mahmoud Abbas, by brokering a power-sharing agreement with Mr. Abbas’s Fatah and Hamas that did not require Hamas to recognize Israel or forswear violence. The Americans had believed, after discussions with Prince Bandar, that the Saudis were on board with the strategy of isolating Hamas.

American officials also believed, again after speaking with Prince Bandar, that the Saudis might agree to direct engagement with Israel as part of a broad American plan to jump-start Israeli-Palestinian peace talks. King Abdullah countermanded that plan.

Most bitingly, during a speech before Arab heads of state in Riyadh three weeks ago, the king condemned the American invasion of Iraq as “an illegal foreign occupation.” The Bush administration, caught off guard, was infuriated, and administration officials have found Prince Bandar hard to reach since.

Since the Iraq war and the attendant plummeting of America’s image in the Muslim world, King Abdullah has been striving to set a more independent and less pro-American course, American and Arab officials said. And that has steered America’s relationship with its staunchest Arab ally into uncharted waters. Prince Bandar, they say, may no longer be able to serve as an unerring beacon of Saudi intent.

“The problem is that Bandar has been pursuing a policy that was music to the ears of the Bush administration, but was not what King Abdullah had in mind at all,” said Martin S. Indyk, a former United States ambassador to Israel who is now head of the Brookings Institution’s Saban Center for Middle East Policy.

Of course it is ultimately the king — and not the prince — who makes the final call on policy. More than a dozen associates of Prince Bandar, including personal friends and Saudi officials who spoke on condition of anonymity, said that if his counsel has led to the recent misunderstandings, it is due to his longtime penchant for leaving room in his dispatches for friends to hear what they want to hear. That approach, they said, is catching up to the prince as new tensions emerge between the United States and Saudi Arabia.

Mr. Bandar, son of one of the powerful seven sons born to the favorite wife of Saudi Arabia’s founding king, “needs to personally regroup and figure out how to put Humpty Dumpty together again,” one associate said.

Robert Jordan, a former Bush administration ambassador to Saudi Arabia, said the Saudis’ mixed signals have come at a time when King Abdullah — who has ruled the country since 1995 but became king only in 2005 after the death of his brother, Fahd — has said he does not want to go down in history as Mr. Bush’s Arab Tony Blair. “I think he feels the need as a kind of emerging leader of the Arab world right now to maintain a distance,” he said.

Mr. Jordan said that although the United States and Saudi Arabia “have different views on how to get there,” the countries still share the same long-term goals for the region and remain at heart strong allies.

An administration spokesman, Gordon D. Johndroe, said none of the current issues threatened the relationship. “We may have differences on issues now and then,” he said, “but we remain close allies.”

Or, as Saleh al-Kallab, a former minister of information in Jordan, put it, “The relationship between the United States and the Arab regimes is like a Catholic marriage where you can have no divorce.”

But there can be separation. And several associates of Prince Bandar acknowledge that he feels caught between the opposing pressure of the king and that of his close friends in the Bush administration. It is a relationship that Prince Bandar has fostered with great care and attention to detail over the years, making himself practically indispensable to Mr. Bush, his family and his aides. ...

Agent Provocateur Ultimo: Prince Bandar and the Price of Oil

News Corp. Investor Prince Alwaleed Believes "Too Much is Made" of Phone-Hacking Scandal

Prince Andrew: 'Cheerleader in Chief for the Arms Industry'