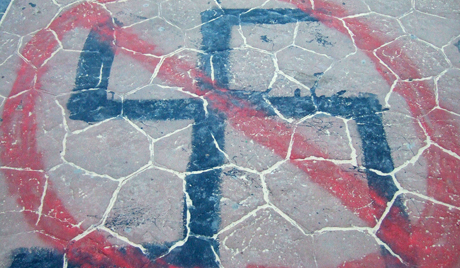 The forum of the international human rights movement “World without Nazism”, which has been founded in Kiev, is aimed at embracing all anti-Fascists across the world to fight effectively against neo-Nazism, xenophobia and Fascism.

At present, neo-Nazi movements are functioning in many European countries and former Soviet republics. This hostile ideology is often implanted by the ruling politicians. Politicians in Estonia and Latvia are glorifying the collaborators of Nazism. The former leaders of Ukraine also followed in these footsteps, but this has radically changed after the new government was formed in the country. The anti-Nazi forum held in Ukraine’s capital Kiev is a victory of common sense over neo-Nazism, the successor of Fascism in the 21st century.

The fight against neo-Nazism and attempts to rewrite history requires coordinated efforts, said Boris Shpigel, a member of the Upper House of the Russian parliament, addressing representatives of 100 human rights organizations in 23 countries.

The discussion about neo-Nazism was constructive with examples from real life. For one, the industry of producing Nazi symbols is blooming in Estonia, while the government is persecuting anti-Fascists. In Moscow, young people are being convinced that Romanian dictator, Antonescu, who sympathized with the Nazis, saved Jews during the Second World War. 70 thousand collaborators have been granted honours of the veterans of the Second World War. The human rights activists warn that neo-Nazism is unfortunately gaining momentum in Russia, but at the same time they express hope that with the adoption of the Article 282 of the Constitution concerning ethnic crimes the situation will improve.

At least there is such a trend, says the president of the “Holocaust” public foundation, a member of Russia’s Public Chamber, Alla Gerber.

“We have long pressed for legal proceedings to be instituted under the Article 282,” says Alla Gerber. “This was not done and all accusations were based on hooliganism. The culprits often received suspended sentences, and neo-Fascists were released on the 9th of May, the Victory Day. At present, mass media are displaying different attitude towards this issue,” Alla Gerber said.

The key task of the movement will be the establishment of an international “early warning” system to monitor and prevent the spread of Nazi ideas and actions.

The movement plans to attract the Council of Europe, European Parliament, the United Nations and international tribunals. It also plans to publish a “White Paper on Fascism” with a complete list of territories across the world where this hostile ideology is common.