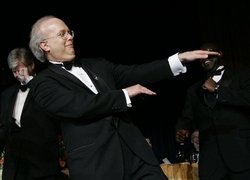 Having hit a bump in 2008, Texas-based Republican operative Karl Rove is back with an effort to create an enduring Republican majority. Word is Rove is quietly building a massive fundraising, organizing and advertising machine based on the model that Democrats used to retake the White House and Congress after the Bush years. The Politico has the story today.

According to the report, the new groups could give Republicans and their allies a powerful campaign apparatus separate from the Republican National Committee. Rove and GOP pal Ed Gillespie are the most prominent forces behind it. The network has five overlapping 527 organizations, a designation that allows wider latitute in raising individual and corporate money to elect Republicans. The network attempts to replicate the Democracy Alliance, an umbrella group founded in 2005 and funded by George Soros and other billionaires to help Democrats.

One of the groups, The Republican State Leadership Committee, is already showing up in Texas races. The group — fueled by individual and corporate money — has given $50,000 to Republican Attorney General Greg Abbott. As AG, Abbott has targeted elderly and minority votes in Democratic precincts with warnings against voter fraud. In most cases, votes were properly cast and no votes were changed.

The Silence of the Quandts: The History of a Wealthy German Family (Film Review)
May 15