Dana Milbank will live chat with readers Friday at Noon ET on this topic and more. Submit your questions, comments and opinions for him to respond to now. 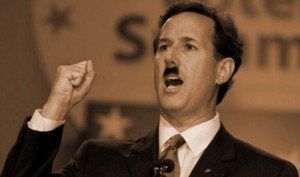 Rick Santorum sees Nazis everywhere: in the Middle East, in doctor’s offices and medical labs, in the Democratic Party, and now in the White House.The Republican presidential candidate told a group of supporters Sunday night that this year’s election was like the time between 1940 and 1941 when Americans didn’t act against Adolf Hitler because they thought he was “a nice guy” and not “near as bad as what we think.”

“It’s going to be harder for this generation to figure this out. There’s no cataclysmic event,” he explained, but similar urgency. “Is anybody reminding us who we are, what made us great, and what these assaults are all about?”The obvious implication — later denied by the candidate — was that Santorum is some modern-day Churchill and President Obama is der Fuhrer. It was outrageous and yet, for Santorum, routine.

Six years ago, in his losing bid for reelection to the Senate from Pennsylvania, Santorum had a remarkably similar take on the stakes. “If we are not successful here and things don’t go right in the election, there’s a good chance that the course of our country could change,” he said, according to an account in the Lebanon (Pa.) Daily News.“We are in the equivalent of the late 1930s, and this election will decide whether we are going to continue to appease or whether we will stand and fight while we have a chance to win without devastating consequences.”His opponent, Democrat Bob Casey, won the election, and yet the country somehow did not fall to the brownshirts.

In explaining why his remark over the weekend wasn’t linking Obama to Hitler, Santorum said that “the World War II metaphor is one I’ve used a hundred times.” This is not an exaggeration — and that’s Santorum’s problem. ...

Yet this is where Santorum exists, in a place of binary extremes of good and evil, where his political foe isn’t just wrong but adheres to a “phony theology” not found in the Bible. His frequent tendency to go from zero to Nazi over ordinary political disagreements is typical of the emotional appeal he has to conservative primary voters, but it also shows why he’s outside the bounds major political parties have applied to their past presidential nominees.

Some of Santorum’s opponents have suggested that his Hitler tic reflects his own autocratic tendencies; his opponent’s campaign manager in 2006 called Santorum “one notch below a Nazi.” But while Santorum favors more coercive government — one that could, for example, ban birth-control pills — he isn’t a Nazi. He worked against anti-Semitism in the Senate and tried to get a German physician prosecuted for Nazi war crimes. The problem is Santorum is such a stranger to democratic give-and-take that he thinks it’s okay to label everybody else as Nazis.

His most famous episode came in 2005, when Democrats criticized Senate Republicans for threatening to do away with the filibuster. “The audacity of some members to stand up and say, ‘How dare you break this rule?’ — it’s the equivalent of Adolf Hitler in 1942 saying, ‘I’m in Paris. How dare you invade me? How dare you bomb my city? It’s mine.’ ”

That same year, Santorum published a book, “It Takes a Family,” in which he tied fetal genetic testing, evolution theory and embryonic stem-cell research to Nazism. He quoted with approval the view that diagnosing and aborting fetuses with genetic malformations “can be considered an earlier phase” of the “German negative eugenics movement.”

Of the Darwinian view of a “purposeless universe,” Santorum wrote that “the Nazis built their pseudoethics with its grim logic on precisely this Nietzschean cosmological view.” Embryonic stem-cell research, he added, makes him “wonder if we have merely been momentarily delayed in our slide” toward the Nazi ethics.

In his unsuccessful 2006 campaign, he often invoked Churchill’s “gathering storm” phrase and compared Iran’s Mahmoud Ahmadinejad to Hitler. He also called for more active use of the term “Islamic fascism.” Last year, Santorum warned that if the Muslim Brotherhood prevails in Egyptian elections, it would be like the Nazis winning in 1933: “That was the last democratic election.”

When used on Ahmadinejad or the Muslim Brotherhood, the Nazi talk is provocative, but defensible. When used on an American president and a rival political party, it shows an alarming lack of perspective

Formula One Boss Praises Hitler … Why???