Republican Jews vs. the Poor 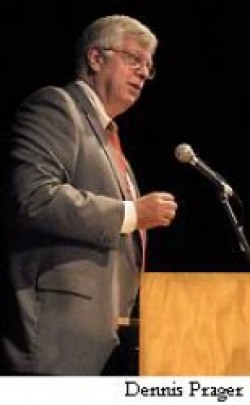 With a fabulous (and not very kosher, to my secular Jewish eye and tastebuds) spread from Wolfgang Puck, the Republican Jewish Coalition convened in Minneapolis’ Walker Art Center on Tuesday afternoon to vilify liberals, hail John McCain and Sarah Palin, and contemplate the holocaust to come if Barack Obama is elected president. Dennis Praeger, the right-wing talk show host, kicked off the event by challenging Jewish Democrats’ knowledge of the holy texts. You’d never know it if you hung with Jewish Democrats, Praeger thundered, but the Torah actually tells you that “you cannot favor the poor.”

The relief in the room was palpable.

“Many of our fellow Jews are very idealistic,” Praeger sighed, “especially the kids in universities, but they lack wisdom.” They also fail to appreciate martial virtues: “Auschwitz was not liberated by peace activists.”

Actually, Auschwitz was liberated by the Red Army, but Praeger didn’t go there.

The RJC reception was billed as a salute to Republican governors, some of whom showed up. Among them was Georgia’s Sonny Purdue, who told the crowd that, “John McCain is not an appeaser. And if we begin going down a path of appeasement, there will be no going back.” As for Sarah Palin, Purdue continued, she’s “a person in her own right and independent woman, but an effective governor.”

A big hand for the little lady.