” … The current government shutdown is a foretaste of the radical right’s deadly serious agenda to take sole power, irrespective of their increasing unpopularity. … When a movement seeks to take power, they do so in steps. By this point all too many steps have already been taken to fascist norms. … The cauldron of contradictions is boiling. The pot is erupting over. The worst is near and burying your head in the ground will only get you annihilated in the storms that are brewing. … “

If I could start a country with a bunch of people, they’d be the folks who were standing with us the last few days. Let’s hope we don’t have to do that! Let’s beat that other side to a pulp! Let’s take them out. Let’s chase them down. There’s going to be a reckoning! — GOP Rep. Steve King at a 2010 Tea Party Rally opposing the Affordable Healthcare Act in front of Congress

Our job is to reclaim America for Christ, whatever the cost. As the vice regents of God, we are to exercise godly dominion ” over our neighborhoods, our schools, our governments, our literature and arts, our sports arenas, our entertainment media, our news media, our scientific endeavors — in short, over every aspect and institution of human society. — D. James Kennedy, Coral Ridge Ministries Pastor, at a “Reclaiming America for Christ” conference in February 2005

We will not try to reform the existing institutions. We only intend to weaken them, and eventually destroy them. — A Manifesto from Paul Weyrich’s Free Congress Foundation

The current government shutdown is a foretaste of the radical right’s deadly serious agenda to take sole power, irrespective of their increasing unpopularity and irrespective of the supposedly sacrosanct rules, principles, laws, and customary ways of doing things in this country. Their targets for overthrow include the Constitution’s separation of church and state as well as all of the institutions and arenas of society. This is their attitude, about which they are entirely sincere: “We want it all and we are not going to stop until we get it, because God’s on our side and anyone who stands in the way will be beaten to a pulp because we are the lambs of Jesus.”

Scroll back four years. On August 11, 2009 I wrote an article, the first of a series of articles about the fury unleashed at Town Halls over Obamacare. It was entitled “Town Hall Fracases and the Fascist Movement.” It began this way: 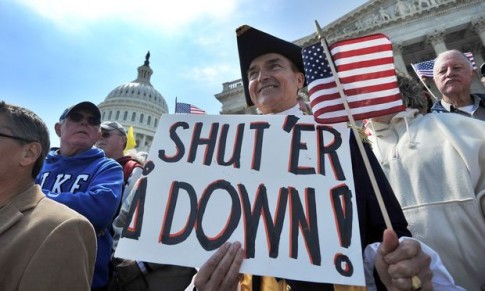 “By now we have nearly all heard about the raucous town hall meetings over health care. In today’s Washington Post (August 11, 2009), for example, Sen. Arlen Specter, meeting with the public in a Lebanon, Pennsylvania town hall meeting, reproducing a similar scene that greeted him in Philadelphia last week, we have this revealing excerpt:

“‘You have awakened a sleeping giant,’ said Katy Abram, 35, a stay-at-home mother from Lebanon. “I don’t want this country turning into Russia, turning into a socialized country.’

“‘Specter fielded 13 questions before someone voiced support for the health-care reform efforts. Questioner No. 14, Marilyn Boogaard, said she was nervous to stand up and say something positive about Democrats’ health plan for fear of being booed.

“‘I almost didn’t want to ask my question because it’s so intimidating,’ said Boogaard, 58, a nurse practitioner from Lebanon.”

“At the town hall that Obama was going to attend, MSNBC reported:

“‘Outside the event where President Obama will conduct his town hall, there is an anti-Obama protestor with a gun — a pistol strapped to his lower leg.

“‘The local police chief said it’s legal for the man to have a registered handgun — as long as it is not concealed. What’s more, he is on private property, a church yard, which has given him permission to be there.'”

“Some people look at all of this and think, ‘This is crazy.’

“It is crazy, but there is a deadly underlying method to this madness. The intimidation and bullying, thuggish, atmosphere fueled by alarmist, fabricated, lying, and distorted propaganda from the organs of right wing extremists at Fox News, the Christian fascist movement and the motley crew of fascists working in collusion with the GOP leadership, are purposeful, engineered, and extremely dangerous.

“As Marilyn Boogard cited in the Post article says, she was afraid to say something positive about the Democrats’ plan because of the lynch mob attitude being whipped up. This is remarkable if you think about it: in town halls, where polite discourse is the norm, people who support the majority party in Congress and the party that holds the White House are almost too scared to speak up in the face of worked-up-into-a-lather conservatives who think that Obama’s an illegitimate president, a socialist, that the Democratic Party is chock full of traitors, and that the country’s going to become another Russia.

“When a movement seeks to take power, they do so in steps. By this point all too many steps have already been taken to fascist norms. The transition from being afraid to speak up to being physically shut up is a short step indeed.” 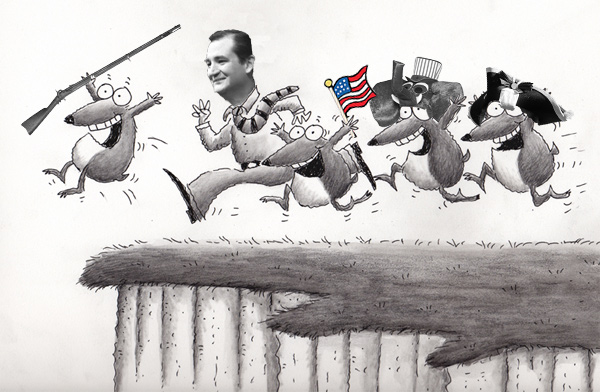 The Tea Party and the Evangelicals make up about 80% of the social base for the GOP. The remaining 20% are moderate Republicans. The Tea Party and the Evangelicals are the cutting edge of the GOP and the GOP has made its pact with them and cannot extricate themselves from them at this point, even if they wanted to do so. To do so would end them as a party.

Most people in this country are wondering what craziness has possessed these forces that are willing to shut the government down and possibly plunge the country into an economic calamity with far-reaching consequences.

The answer, to put this simply, is that they are absolutely convinced that if they don’t stand up now and fight to the death over this, that their way of life and the America that they believe in are done. So they see any compromise — i.e., following the rules where if you’re outvoted (e.g., Obamacare) you accede to the majority — as unacceptable.

And in a sense they are right.

To put this in the most simplistic of terms without, for the moment, any nuance and qualifiers: their way of life and the America they believe in are in danger of disappearing.

The changes that are so stirring up the Tea Party and the Evangelicals are various and some of their reactions are straight-up nativist, racist, sexist and homophobic. Some of what alarms them is valid in the sense that they see the corrupting influence of the parasitism and ruthlessness of late stage capitalism. The pornification of all too much of popular culture, for example, makes many of them ill, and for good reason. The bailouts of big business by public officials, both Republican and Democratic, also deeply trouble at least some of the Tea Partiers and had Obama taken office and not bailed out the big banks he would have taken much of the wind out of the sails of the Tea Party in its early inception stages.

A majoritarian white, Christian America that has no (open) homosexuals is in trouble and is being replaced by a more polyglot society. The privileges of this previously majoritarian white culture are being challenged both by more diversity and by neoliberal globalization that is systematically dismantling the historic large middle/working class, Main Street, and small town values. They see their world as they have known it and to some extent romanticized as sliding down the tubes and they are shocked and ready to fight to the end to preserve it. They wrongly see Obama because of his color as their enemy, even though the threat that he poses is independent of the fact of his skin color. Obama is part of the capitalist/imperialist class that the Koch Brothers that fund the extreme right wing are also part of. But for them to see the distinction here would take a genuinely revolutionary force to emerge and contend in the mix here and that revolutionary force is not yet big enough or influential enough to do that.

In the present moment then the Koch Brothers et al are calling the shots and the GOP’s fascist core — its leaders such as Rep. King, Boehner, and its aroused base — are determined to set new terms by which they, no matter how unpopular they are in the country as a whole, call the shots and the Democrats accede to their demands.

It says something very profound about the real character of this country historically as well as at the present moment that a significant minority of its people are so inured to their privileges and entitlements by their skin color especially, that they are prepared to wage another civil war with weapons to defend that. This is a major and core part of what America truly is and has been: it has always been, since the slave trade and the genocide of Native Americans, a racist country. There is no way that real change from that legacy and present day reality can occur without a clash between those who want to defend and preserve that (who celebrate and engage in shooting down hoodie wearing or non-hoodie wearing black people, etc.) and those who want to see a genuinely open, just, and diverse society of equality. This is because the side that wants to defend male white chauvinist privilege has whipped up its followers into such a lather that they can only think in categorical terms of black and white (both literally in terms of skin color and metaphorically in terms of either/or thinking).

The larger context for this is that the imperialist class — which is made up of different races, ethnicities, and both genders although the disproportionate numbers are of course more homogeneous — is in fierce debate among themselves over how best to keep the Empire together. The GOP and the Democrats are in very intense struggle with each other. They both agree that capitalism and Imperialist Empire must continue. Their differences are over whether that should be through open xenophobic racist fascist norms of brute force or a subtler version that includes some people of color and some more superficial diversity and tipping of the hat rhetorically to inclusion, equal opportunity, and sensitivity to diversity. 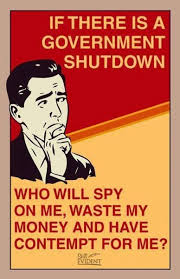 Obama is trying to both placate these openly fascist forces and he works and colludes with them to further destroy the social safety net and the rule of law. The GOP’s insistence to get their way and bring the economic house crashing down if necessary is fascist in character because they are no longer playing by the rules where a majority gets to have its way and the minority must abide by that. The next step beyond that fascist behavior is clear in the quotes that started this article. Obama and the Democrats refuse to call the GOP out for what is so deadly seriously wrong and fascist about what they’re doing. Obama and the Democrats will never call upon the people to rise up to defend due process and the rule of law and to fight openly against these fascists, because they have more in common with these lunatics than they do with the people as a whole.

The cauldron of contradictions is boiling. The pot is erupting over. The worst is near and burying your head in the ground will only get you annihilated in the storms that are brewing.