"... [The] disclosure of Graham as an aspirant war criminal did not excite any commotion when it became public in 1989. ... Very different has been the reception of a new tape revealing Graham, Nixon and Haldeman palavering about Jewish domination of the media and Graham invoking the 'stranglehold' Jews have on the media. ..."

(Excerpt from End Times: the Death of the Fourth Estate.)

There’s a piquant contrast in the press coverage across the decades of Billy Graham’s various private dealings with Richard Nixon, as displayed on the tapes gradually released from the National Archive or disclosed from Nixon’s papers. We’ll come shortly to the flap over Graham and Nixon’s closet palaverings about the Jews, but first let’s visit another interaction between the great evangelist and his commander-in-chief.

Back in April, 1989, a Graham memo to Nixon was made public. It took the form of a secret letter from Graham, dated April 15, 1969, drafted after Graham met in Bangkok with missionaries from Vietnam. These men of God said that if the peace talks in Paris were to fail, Nixon should step up the war and bomb the dikes. Such an act, Graham wrote excitedly, “could overnight destroy the economy of North Vietnam”.

Graham lent his imprimatur to this recommendation. Thus the preacher was advocating a policy to the US Commander in Chief that on Nixon’s own estimate would have killed a million people. The German high commissioner in occupied Holland, Seyss-Inquart, was sentenced to death at Nuremberg for breaching dikes in Holland in World War Two. (His execution did not deter the USAF from destroying the Toksan dam in North Korea, in 1953, thus deliberately wrecking the system that irrigated 75 per cent of North Korea’s rice farms.)

This disclosure of Graham as an aspirant war criminal did not excite any commotion when it became public in 1989, twenty years after it was written. No one thought to chide Graham or even question him on the matter. Very different has been the reception of a new tape revealing Graham, Nixon and Haldeman palavering about Jewish domination of the media and Graham invoking the “stranglehold” Jews have on the media.

On the account of James Warren in the Chicago Tribune, who has filed excellent stories down the years on Nixon’s tapes, in this 1972 Oval Office session between Nixon, Haldeman and Graham, the President raises a topic about which “we can’t talk about it publicly,” namely Jewish influence in Hollywood and the media.

Nixon cites Paul Keyes, a political conservative who was executive producer of the NBC hit, “Rowan and Martin’s Laugh-In,” as telling him that “11 of the 12 writers are Jewish.”

“That right?” says Graham, prompting Nixon to claim that Life magazine, Newsweek, the New York Times, the Los Angeles Times, and others, are “totally dominated by the Jews.”

Nixon says network TV anchors Howard K. Smith, David Brinkley and Walter Cronkite “front men who may not be of that persuasion,” but that their writers are “95 percent Jewish.” 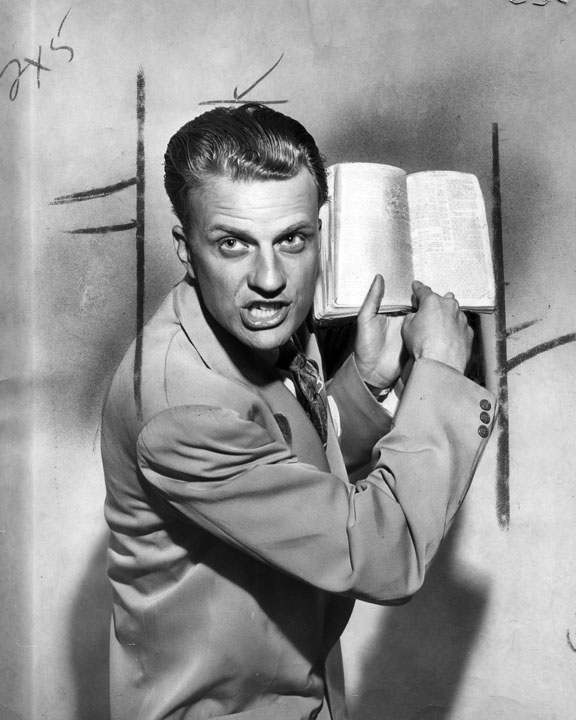 “This stranglehold has got to be broken or the country’s going down the drain,” the nation’s best-known preacher declares.

“You believe that?” Nixon says.

“No, but if you get elected a second time, then we might be able to do something,” Graham replies.

Magnanimously Nixon concedes that this does not mean “that all the Jews are bad,” but that most are left-wing radicals who want “peace at any price except where support for Israel is concerned. The best Jews are actually the Israeli Jews.”

“That’s right,” agrees Graham, who later concurs with a Nixon assertion that a “powerful bloc” of Jews confronts Nixon in the media.

“And they’re the ones putting out the pornographic stuff,” Graham adds.

Later Graham says that “a lot of the Jews are great friends of mine. They swarm around me and are friendly to me. Because they know I am friendly to Israel and so forth. They don’t know how I really feel about what they’re doing to this country.”

After Graham’s departure Nixon says to Haldeman, “You know it was good we got this point about the Jews across.”

Within days of these exchanges becoming public the decrepit Graham was hauled from his semi-dotage, and impelled to express public contrition. “Experts” on Graham were duly cited as expressing their “shock” at Graham’s White House table talk.

Don’t they know that this sort of stuff is consonant with the standard conversational bill of fare at 75 per cent of the country clubs in America, not to mention many a Baptist soiree?

Nixon thought that American Jews were lefty peaceniks who dominated the Democratic Party and were behind the attacks on him.

Haldeman agreed with both of them.

At whatever level of fantasy they were all acknowledging power. But they didn’t say they wanted to kill a million Jews.

That’s what Billy Graham said about the Vietnamese and no one raised a bleat.