A prominent charity that’s enlisted Presidential help in raising money for troop care packages not only misrepresented their achievements, but also funneled “millions of dollars in revenue” to its founder’s political allies and Tea Party consulting firms, Pro Publica (via The Daily Beast) reported today.

Move America Forward, a charity that sent care packages to troops deployed overseas, employed all sorts of tactics to raise money — from actual events like throwing telethons at the Ronald Reagan Library with conservative celebrities like Sean Hannity, Rush Limbaugh, Sarah Palin, and both President Bushes, to completely fabricated claims, like boasting a partnership with Walter Reed Medical Center (which the Department of Defense claims has never existed), or using stock images of veterans and other charities’ photos in their testimonials. But the care packages they purported to send never made it to the troops: in one case, they bragged about sending packages to 800 Afghanistan-based Marines part of a battalion nicknamed Geronimo, failing to realize that the battalion was actually based in Japan.

So how much money did MAF actually raise, and where is it going? Pro Publica estimates that the charity exaggerated how much it had raised, but its tax returns show that it funneled the money into conservative political action committes that lean towards the Tea Party — specifically, groups connected to MAF’s founder, Sal Russo:

Russo is better known for helping to form the Our Country Deserves Better PAC, also known as the Tea Party Express, one of the largest Tea Party groups in the country. Consultants from his Sacramento-based firm, Russo, Marsh and Associates, also set up two other PACs, the Move America Forward Freedom PAC and the Conservative Campaign Committee, to aid conservative causes and candidates.

Russo and his associates have previously drawn attention for lavishing funds raised through the committees on themselves, using this money on an Alaskan cruise and fancy hotels as well as paying themselves huge consulting fees…According to its five most recent tax returns, Move America Forward paid out more than $2.3 million to Russo or Russo, Marsh and Associates for services including “program management and advertising.” That’s about 30 percent of the charity’s overall expenditures over that time. 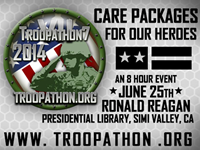 Charities that accept tax-deductible donations, such as Move America Forward, are prohibited by law from using their donations to fund partisan activities.

The CIA, ABC and the Rise of Rush Limbaugh

Rush Limbaugh is the Brains of the GOP, Biographer Says

In His Own Words: Proof that Rush Limbaugh is Psychotic

The Networks & the National Security State