Twenty-five years later, the MOVE bombing is still surrounded by silence and indifference. 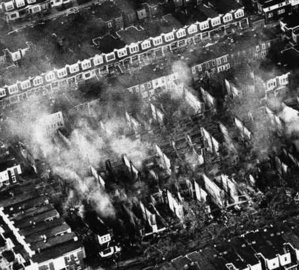 I watched my city murder five children. They burned alive in front of my eyes as all of Philadelphia witnessed it on live television. Their ashes fell on my head as a biblical tower of flame rotated slowly from right to left, filling the sky above where I stood in horror among a bewildered crowd at 62d and Walnut.

I shouted to a man on my right, "How can they do this?" He answered quietly, "That's my house."

He was a Philadelphia police officer who lived on the 6200 block of Osage Avenue. His family's home was one of the 61 destroyed that night, along with their lifetimes' worth of possessions, valuables, photographs, and irreplaceable memories.

Twenty-five years later, a younger generation of Philadelphians knows little about MOVE, much like the baby-boom generation of German children who knew next to nothing about the evils perpetrated by their government before and during World War II.

I teach journalism at a local college, and most of my 18- to 22-year-old students had never heard of MOVE when I assigned them to interview five people between the ages of 20 and 70 about that day, the bomb, the fire, the dead children, and the 250 people left homeless by the reckless, incomprehensible, and ultimately unpunished acts of city authorities from the mayor on down. I wasn't surprised that the friends of my students didn't know about May 13, 1985. But even their parents had only vague or faulty memories of the day when "the police dropped a bomb on a house full of radicals and blew up the neighborhood," as a parent of one student remembered it.

If only it had been that simple. If only it had been a big boom rather than a slow, decade-long burn of mounting tension, as rational city authorities were driven to insane action by the premeditated provocations of a coolly irrational and unexplainable cult called MOVE.

The apocalyptic irony of May 13, 1985, is that everything the crazy people predicted came to be. MOVE said the authorities would try to annihilate them, and as a consequence there would be a fiery confrontation the likes of which Philadelphia had never seen.

Let me describe May 13 in the shorthand I developed as a reporter and columnist watching the events unfold.

A bunch of crazy people had taken five children hostage. (None of the six MOVE adults were the biological parents of the children inside 6221 Osage Ave.)

The police tried freeing the children in the morning by firing 10,000 bullets into the house that held them.

Then, during a 10-hour siege, firemen poured millions of gallons of water on the house that held the children.

Then police dropped a bomb that set the house that held the children on fire.

Then firemen stood by for a full hour and allowed the fire to burn down the house that held the children - and, incidentally, the homes of 60 neighbors.

So, I ask you, who killed those children? All the crazy adults inside the house deserved blame, and they ended up dead. But what about the crazy adults who dropped the bomb and let the fire burn?

Not one person in charge that day lost a job, or even a day's pay. The only guy who went to jail was the crooked out-of-state contractor who was stealing faster than he could build shoddy houses on Osage and Pine.

Wilson Goode, Philadelphia's first black mayor and the one responsible for the carnage, was reelected two years later. First he defeated Ed Rendell in the Democratic primary, with 80 percent margins in majority-black neighborhoods, and then he beat Frank Rizzo in the general election, with similar margins in those neighborhoods. And no sooner had Goode been reelected than Philadelphians, both black and white, turned their backs on the mayor who caused our shame, wishing he would go away.

Goode became a lame duck on May 13, 1985. But the racial realities of Philadelphia politics required that he serve six more years, as if to punish the city and its citizens for their sins of silence. We had accepted the unacceptable. We had watched children burn alive and shrugged.

I spoke to Rizzo on the phone three days after the MOVE confrontation. He compared it to the first MOVE confrontation, which took place in Powelton Village seven years earlier, when Rizzo was mayor, and resulted in the death of a police officer. His comparison has haunted me for 25 years.

The dirty little secret about MOVE is that there is no secret. We were all in on it. The mark of Cain is everywhere.

Who can blame us if we pretend to forget the unforgivable? But our duty is to remember and to teach our children the shame of a city - not that they should feel shame, but that they should know the awful truth.

Clark DeLeon is a former Inquirer columnist who wrote extensively about the MOVE confrontations in 1978 and 1985. He and his family live in West Philadelphia, a block away from the current MOVE house, where he often sees MOVE children at play. His blog is at dailydeleon.com.