” … Did the jury verdict exonerate Churchill on the accusations of academic fraud? Not by a long shot. … “ 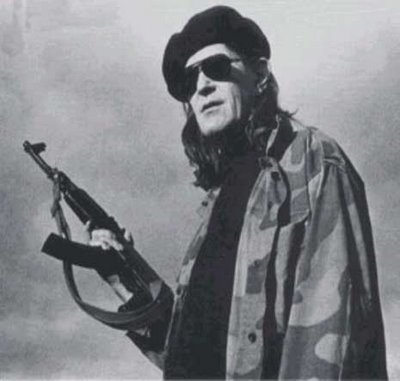 It was a victory for hate speech, academic fraud and perjury.

The University is apparently considering an appeal: “University of Colorado at Boulder Interim Chancellor Philip P. DiStefano released this statement on the university’s Web site, saying: ‘While I am disappointed by the jury’s decision, I am still confident that the process we used to review allegations of research misconduct was appropriately applied in this case. The university attorneys will evaluate the next steps in the legal process.’ … “

In Part One, we witnessed “Dr.” Ward Churchill lying blatantly on the stand about his ethnic background. As I explained in the introduction, Barbara Mann, an English teacher at the University of Toledo, whose testimony “supported” Churchill’s academic writing, was once herself fired for fabricating information in an article – an infraction that I verified, since I worked in the same office with Barbara Mann for over a year and witnessed the firing at close range.

Below we find “Dr.” Churchill lying about his own work after Mann had “confirmed” his research on the stand. – AC

… Credit Churchill’s attorney, David Lane, and his legal team for their excellent work, but don’t fault CU’s very capable lawyers for the outcome. …

CU’s attorneys faced a near-insurmountable legal challenge. After all, the primary legal inquiry posed to the jury was whether, for a majority of the nine regents, the essay was a “substantial or motivating factor” in the dismissal.

How could it not have been, since just 2 1/2 years earlier, eight of the same regents who fired Churchill passed a resolution decrying his “disgraceful comments” that brought “dishonor” to the university.

Did the jury verdict exonerate Churchill on the accusations of academic fraud? Not by a long shot.

The erstwhile professor’s explanation for how verbatim passages of another’s work wound up in an essay credited to him was unconvincing, and his citation of his own “ghostwritten” article still seems academically dishonest.

To be totally fair, the evidence on the claims of falsification and fabrication was underwhelming, more like nit-picking than legitimate examples of scholarly wrongdoing.

What probably motivated the jury to seek to award Churchill next to nothing was instead the same essay that cost him his job.

The inflammatory nature of that piece, which characterized World Trade Center workers as “little Eichmanns inhabiting the sterile sanctuary of the twin towers” who really had it coming, surely won him no friends among the jurors.

Indeed, the margin of victory, if you can call it that, was very narrow. Judging from one of the jury notes sent out, it appears that five of the six jurors wanted to award nothing but were advised by Chief District Court Judge Larry Naves that if they found no damages, they should award $1.

The potential for appeal on that ruling aside, the difference between $1 and a “no damages” verdict in this case is monumental.

As the “prevailing party” on a civil rights claim, Churchill is entitled to attorney fees, which likely total in the mid-six figure range.

Luckily for CU, Churchill could not make good on his reported earlier boast that he would end up “owning the University” if fired. The verdict is $2,999,999 less than the $3 million it cost CU to be rid of former football coach Gary Barnett.

But then again, CU may still have Churchill to kick around once Judge Naves rules on Churchill’s upcoming request for reinstatement, which is the preferred remedy in wrongful discharge cases.Credit Churchill’s attorney, David Lane, and his legal team for their excellent work, but don’t fault CU’s very capable lawyers for the outcome.

2004 DNA Test Confirms That Ward Churchill Has No Indian Ancestry