" ... CU attorney Patrick O’Rourke said he was pleased with the court’s decision. It recognized the fact that professors deserve a chance to defend themselves in front of their peers, but that if they are found guilty of misconduct, 'they will be held accountable,' he said. ... " 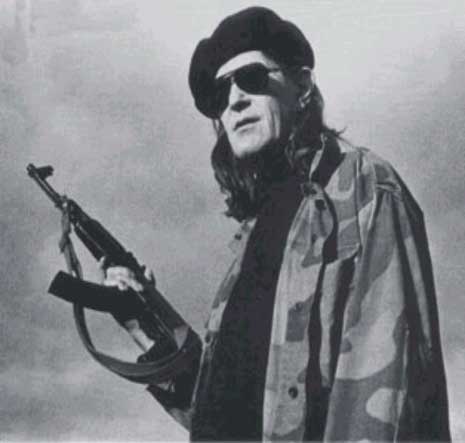 Ward Churchill, as I've stated since his firing by the University of Colorado, was justifiably terminated. He invents historical facts. He is a plagiarist. He has profiled himself to the world at large - and the jury - as a native American Indian. He isn't.

This case is about adademic misconduct, and worse. Ward Churchill is a federal provocateur ... as I've also stated for years. His appearances on Democracy Now! are only one more stinging indictment of Amy Goodman, a leading figure on the controlled left who has hosted famous dissemblers like Churchill, Robert Jay Lifton, Bill Moyers, Bill Ayers, and other planted guests who Amy touts on her radio program. (Tip: Whenever Amy o0zes with cloying admiration for a guest, it's a controlled "spokesman of the left" she is pushing off on gullible listeners.)

The appeals court has upheld the firing of Ward Churchill because it was not swayed by his facile rhetoric ... unlike many on the left who defend him on "free speech" or "academic freedom" grounds. Put down the protest signs. This is not a First Amendment issue - as Churchill claims in worm-tongued appeals for sympathy.

He was fired because he is a fraud, a fact upheld on appeal.

Advice to my fellow progressives who defend Churchill: do some actual legitimate research on him, discern the facts from his fibs, and don't be a sucker for the next faux leftist intellectual who appears on Pacifica Radio with Goodman's saccharine oozings of approval.

Former University of Colorado professor Ward Churchill, who gained notoriety after an essay he wrote compared 9/11 victims to a Nazi, plans to take his case to the state's highest court after the Colorado Court of Appeals upheld a judge's decision to deny giving him his job back.

The appeals court ruled that former Denver Chief District Judge Larry Naves was right to direct a verdict in favor of the university by finding that the school was entitled to "quasi-judicial immunity" in terminating Churchill from his job as an ethnic studies professor three years ago.

The three-judge panel rejected Churchill's contention that CU's decision to investigate him for academic misconduct violated his right to free speech.

"This is a case where the political powers are given special treatment by the courts," Lane said. "The message is the regents can fire whoever they want as long as they give them a sham due-process hearing."

He said he will bring the case to the Colorado Supreme Court in the next month or so. If the court declines to take it, Lane said he would turn to the U.S. Supreme Court.

CU attorney Patrick O'Rourke said he was pleased with the court's decision. It recognized the fact that professors deserve a chance to defend themselves in front of their peers, but that if they are found guilty of misconduct, "they will be held accountable," he said.

"It really just affirms that the university was on good legal grounds from the get-go," O'Rourke said.

Wednesday's decision is the latest in a more than five-year saga between Churchill and CU. The dispute began in 2005, when an essay the former professor wrote about the terrorist attacks on Sept. 11 came to light.

The essay, in which Churchill compared 9/11 victims at the World Trade Center to Nazi operatives, or "little Eichmanns," created a firestorm and generated heated debates over the limits of free speech and academic freedom on campus.

CU deemed that Churchill's essay was protected speech, but officials began an investigation into his scholarship after receiving complaints that the 63-year-old professor had plagiarized and falsified his academic work.

After a two-year probe by several CU committees, the regents voted in July 2007 to fire Churchill for academic misconduct.

Churchill sued the school, claiming it wrongfully terminated him in retaliation for his essay, not because of any academic misconduct findings. A jury found in Churchill's favor in April 2009 and awarded him $1 in damages, but Naves vacated the verdict several months later on the grounds that CU's regents enjoy quasi-judicial immunity from being sued. Naves also ruled that Churchill shouldn't be awarded money in lieu of reinstatement.

Last month, Churchill and his lawyer presented oral arguments before the Colorado Court of Appeals.

In the appeals court's 64-page opinion, the judges methodically knocked down Churchill's legal arguments one by one.

The judges wrote that Churchill "misconstrues the purpose and scope of quasi-judicial immunity" in arguing that the regents shouldn't have been shielded from litigation in his case.

"We conclude that the nature of the decision reached by the University and its Regents, and the process by which that decision was reached, shared enough characteristics with the judicial process to warrant absolute immunity from liability," the opinion states. "The protection essential to independence and discretion by the University and the Regents would be gone if they were subject to the intimidation of a lawsuit seeking to undo every decision to terminate a faculty member."

The judges went on to say that Churchill couldn't invoke the concept of academic freedom to avoid undergoing a probe into his professional work and writings.

The appeals court also noted that Churchill was not a victim of an adverse employment action because he remained a tenured professor and was given his normal pay and benefits the entire time he was under investigation.

But Lane, Churchill's attorney, pointed to the jury verdict from the 2009 trial in Denver District Court as the best indicator of what's at stake in the case.

"A jury said the regents violated Ward Churchill's First Amendment rights, and the Court of Appeals shrugs and says, 'That's OK, we're just going to give them immunity,'" he said.

Lane said there are enough salient issues remaining in the case that he thinks he'll get a hearing from the Colorado Supreme Court.

But University of Denver Sturm College of Law Dean Martin Katz wasn't so sure.

Katz, an expert in employment law, said the court would have to believe the rulings in Churchill's case conflict with existing case law or that the case exposes issues that affect a broad segment of society or represent universal legal principles.

Then again, he said, the sheer publicity of the case could compel the justices to review it.

"It is a public enough case and it deals with the state's flagship school that it's possible some of the justices might see a duty to put the voice of the highest court in the state on the record," Katz said.