The Hockey Mom has an abysmal environmental record: ” … ‘Even the Bush administration can’t deny the reality of global warming.’ … ‘The governor is aligning herself and the state of Alaska with the most discredited, fringe, extreme viewpoints by denying this.’ Governor Palin would also like to bring open-cast coal mining to Alaska’s Brooks Range Mountains, an act of environmental vandalism … “ 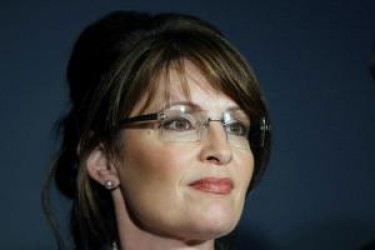 Seen from the air, Sarah Palin’s state is an environmental wonderland. From Anchorage to the Arctic National Wildlife Refuge, there is a vast landscape of snow-capped peaks, fjords, crystal glaciers, coastal lagoons, wide river deltas and tundra.

The guardian of this wilderness – and Governor of Alaska – has, this week, become one of the most recognisable faces in the world. But behind her beaming smile and wholesome family values is a woman aligned with the big oil and coal firms that are racing to exploit Alaska’s vast energy reserves. In the short term, that has bought her popularity at home.

“I love the woman,” the pilot on our flight shouts over the noise of the engine, “especially what she wants to do with oil, we just have to drill more, there is no alternative. What’s the point of leaving it all in the ground?”

It is a stance that guaranteed John McCain’s new running mate a rapturous reception at the Republican convention this week where the response to the coming energy crisis was a chant of “drill, baby, drill”.

But the woman who could soon be a 72-year-old’s heartbeat away from the United States presidency has an environmental policy so toxic it would make the incumbent, George Bush, blush.

Mr McCain has stressed he is concerned about global warming and has come out against drilling in the Arctic reserve. But, in recent weeks, he has wobbled on the issue. And environmentalists are describing Mrs Palin, who denies climate change is man-made, as “either grossly misinformed or intentionally misleading”.

She wants to start drilling. She wants to block US moves to list the polar bear as an endangered species. And she has allowed big game hunters to shoot Alaska’s bears and wolves from low-flying planes.

The 44-year-old governor says a federal government decision to protect the polar bear will cripple energy development offshore. As a result, she is suing the Bush administration, which ruled the polar bear is endangered and needs protection.

The US Geological Survey says climate change has shrunk Arctic summer sea ice to about 1.65 million sq miles, nearly 40 per cent less than the long-term average between 1979 and 2000.

In such a situation it was unconscionable for Governor Palin to ignore overwhelming evidence of global warming’s threat to sea ice, says Kassie Siegel of the Centre for Biological Diversity.

“Even the Bush administration can’t deny the reality of global warming,” Ms Siegel said. “The governor is aligning herself and the state of Alaska with the most discredited, fringe, extreme viewpoints by denying this.”

Governor Palin would also like to bring open-cast coal mining to Alaska’s Brooks Range Mountains, an act of environmental vandalism in the eyes of many.

The Palin administration has allowed Chevron to triple the amount of toxic waste it pours into the waters of Cook Inlet. This, even though the number of beluga whales in the bay has collapsed from 1,300 to 350 – the point of extinction – because of pollution and increased ship traffic.

On the Republican convention floor she said: “We Americans need to produce more of our own oil and gas and take it from a gal who knows the North Slope of Alaska: We’ve got lots of both.”

The fact that drilling won’t solve every problem “is no excuse to do nothing at all”, she said, putting the country on notice that “starting in January, in a McCain-Palin administration, we’re going to lay more pipelines … build more nuclear plants … create jobs with clean coal … and move forward on solar, wind, geothermal and other alternative sources”.

Mrs Palin also took a swipe at Barack Obama’s environmental stance saying: “What does he actually seek to accomplish, after he’s done turning back the waters and healing the planet?”

Her support in Alaska relies on squeezing more money for the state from the oil companies themselves. In Alaska, every man woman and child is in line for a bonus cheque of about $2,000 (£1,100) from the state’s massive oil wealth fund. This is, in effect, a vote-buying machine for the would-be Vice-President.

Governor Palin wants nothing to hinder the oil companies. She maintains that polar bears are well managed and their population has dramatically increased over 30 years as a result of conservation. And if the ice should go away, then they will adapt to living on the land.

Many oil companies abandoned Alaska when prices fell in the 1980s but they have been rushing back to drill and prospect areas that are among the least hospitable on earth. That spirit of the Klondike is already in full swing in Prudhoe Bay the epicentre of oil production and one of the world’s largest industrial complexes. It’s so big that BP, UPS and FedEx operate a special fleet of jets from Anchorage just to service to the region.

Hundreds of spills involving tens of thousands of gallons of crude oil and other petroleum products occur in the area each year. Decades-old spills are still a problem and 17,000 acres of wildlife and marine habitat have already been destroyed.

But Prudhoe is just a tiny fraction of the area being targeted by Governor Palin and the oil companies. A similar fate of environmental destruction awaits the entire coastal plain as well as the special areas of the western Arctic – home to migratory caribou herds, musk oxen, wolverines, grizzly and polar bears should a McCain-Palin administration be elected.

The oil boom has attracted oilmen from across America. One of them is Todd Palin, husband to the vice-presidential candidate who works for BP on Alaska’s North Slope.

It is illegal to hunt polar bears, and that is not about to change. But in an area known as “Polar Bear Seas”, from Point Hope on Alaska’s far western edge to the pristine coastal plain of the Arctic National Wildlife Reserve, one tenth of the world’s polar bear population is at risk, as well as beluga and bowheaded whales and bearded and spotted seals.

Big game hunters are happy to pay lots of money to shoot wolves and bears from the air. They also chase them across the snow to the point of exhaustion and then land the planes on skis, shooting them from point-blank range. The animals are considered endangered across the “lower 48” states of America, but not Alaska. The hunters keep and sell the animals’ pelts.

Last year, Mrs Palin proposed offering a bounty of $150 per wolf, as long as the hunter provided the wolf’s foreleg as proof of the kill. The measure did not pass. She even spent $400,000 on a state-funded campaign to block attempts to end the hunt.

Its not just wildlife conservationists who object. Many ordinary Alaskans also condemn the practice as barbaric.

Trish Rolfe, who runs the Sierra Club’s Alaska office, thinks Governor Palin has been a disaster for Alaska’s environment. “The idea that she stands up to the oil companies is a joke,” she says.

“The governor pays lip service to the issue of global warming but denies it is man made. She will not even spend money to help the Inupiaq villages which are about to fall into the sea.”