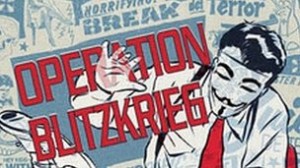 Hackers have targeted Germany's far-right with a Wikileaks-style website.

The launch of nazi-leaks.net follows the start of Operation Blitzkrieg, a campaign against neo-nazi and other far-right sites attributed to Anonymous.

The site includes a list of individuals the hacker group alleges are donors to the National Democratic Party (NPD). The NPD are reported to be considering legal action against the site. Anonymous is a loose-knit gathering of hackers best known for attacks launched in 2010 against companies such as Mastercard, Visa and Paypal in response to their withdrawal of services from Wikileaks.

A statement purporting to be from Anonymous announced the launch of Operation Blitzkrieg.

"We hereby call to you to identify sites where the nazis gather... collect the data and co-ordinate attacks," it said.

The nazi-leaks.net data, the authenticity of which has not so far been verified, also included some NPD emails, customer lists from far-right stores, as well as contact information from a weekly paper. Some of the data had already been published online, German media reports suggest.

The leak has been criticised by some involved in fighting the far-right, citing privacy concerns.

"This is a lot of data, but there are already some names where it's clear the people are not right-wing extremists."

Some people identified in the data had merely been contacted by right-wing publications seeking interviews, she added.

After the news broke, nazi-leaks.net became inaccessible, possibly because of the high volume of traffic it was experiencing. However, the information has been mirrored on other websites, including the Anonops communications blog.

More on This Story

From other news sites