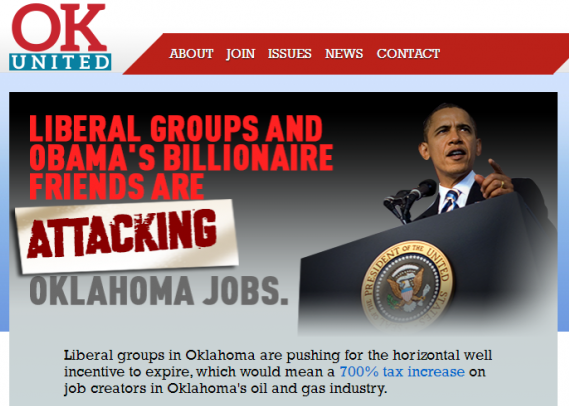 OKLAHOMA CITY – Emboldened by their role in Oklahoma City Mayor Mick Cornett’s re-election campaign in early March, the super-secretive, Chamber-linked OKC United astroturf group has returned to the scene having dropped the “C” in their name and are now calling themselves “OK United.”

Yes, dear reader. The Okie Oligarchs are back and their fascist vision of unbridled corporatism and iron-fisted dominance is becoming a bit clearer.

And while we here at Red Dirt Report want plenty of good jobs in this state and a healthy economy, lack of transparency and half-truths are definitely unhealthy.

After some digging, we discovered that the OKCunited.org was registered to Matt Leonardo, with the GOP-friendly Revolution Agency in Alexandria, Virginia. Leonardo wasn’t talking. A check of WhoIs.com reveals far less information on OKUnited.org, only that it is registered via “DomainsByProxy” of Scottsdale, Arizona. This is to anonymize a private domain so people looking into it have difficulty finding out who is really behind the operation.

At their bare-bones website OKUnited.org, on the “about” section, we find the following:

“OK United promotes pro-jobs, pro-growth, pro-economic opportunity policies in Oklahoma.  Strong state leadership has helped put more and more Oklahoma families on the path to prosperity.  To help continue that success, OK United supports policies that keep hard-earned money in Oklahomans’ pockets.  That includes cutting waste on the state level and pushing back against harmful government overreach like Obamacare on the federal level.  OK United is proud to support candidates who understand the importance of these critical issues.”

So who is really behind OK United and Catalyst Oklahoma? Is it still those three women at the Wilmington, Del. branch of Wall Street’s uber-powerful global law firm Skadden, Arps, Slate, Meagher & Flom? After all, they were the ones who incorporated the not-for-profit Catalyst Oklahoma, of which OKC United and now OK United were a part of. And what of Edmond attorney Bryan N. Evans of the Evans & Davis law firm? Is he involved in this new incarnation of the old OKC United? So far, we’ve run into dead ends since the whole saga began this past winter.

A leaker to OkieLeaks did note that Oklahoma City’s Devon Energy has PACs that give overwhelmingly to Republican candidates. In fact, Devon ranks at number four in the country for this distinction.

State Sen. Cliff Branan (R-Nichols Hills), meanwhile, is still recovering from the bruising court battle over free speech in Oklahoma, is chairman of the Senate Energy Committee and a Corporation Commissioner candidate. We suspect he has some answers since his business, Branan Property Co. at 6301 N. Western Avenue, is also on the Chesapeake Energy Corporation’s campus.

The pompous Branan offered a fatuous press release last Thursday which criticized a new TV ad from “Oklahomans for a Prosperous Future” which he claims “advocates for a large tax increase on oil production.” The press release could have been easily crafted by the  clandestine operators of Catalyst Oklahoma a.k.a. OK United.

“I encourage my fellow legislators to join me in opposing the 700 percent tax increase being sought by those sponsoring this advertisement,” writes Branan.

Branan said OPF wants to demonize the oil and gas industry while using children as an “emotional ploy” because it notes how Oklahoma schools are facing a $200 million cut while horizontal drilling subsidies continue, even though the Oklahoma Policy Institute noted this past week that if the horizontal drilling tax break were allowed to expire, as scheduled, “more than $250 million could be made available to Oklahoma schools, enough to restore funding that was cut during the recession. Revenue from eliminating the tax break could boost school funding by as much as $370 per pupil this year.”

Adds Branan: “Advertising from a group incorporated by an individual who has given tens of thousands of dollars to the campaigns of Barack Obama is misguided, at best, and downright deceitful at worst.”

And yet Branan says nothing of the deceptive tactics and emotional ploys of the covert henchmen of Catalyst Oklahoma and OK United, the same group that made sure Mick Cornett was installed for a fourth term as head honcho of Fat City and the needs of the citizenry were largely ignored so the Chamber could get its way.

Nothing from (OK United’s?) Branan on the needs of Oklahoma’s public schools, which use old, out-of-date textbooks, low-paid teachers and are educated in crowded classrooms.

Nothing from him on the needs of the working class, whose children attend those schools. As the tax break for horizontal drilling grew, spending on education in Oklahoma fell – by an estimated $213 million.

To learn more about “our man from Chesapeake,” Clifford B. Branan III – not to be confused with Wall Street’s Thurston Howell III – go to ElectBrananTheBigot.com. It appears the Sooner Tea Party is getting its comeuppance in the wake of that ever-enlightening disgrace of a trial.

@StrongerOK’s latest Tweet reads: “A 700% #tax increase on #Oklahoma job creators? Sound like the wrong way to keep good paying #jobs from leaving to TX.” The link leads to a page that claims “Liberal groups and Obama’s billionaire friends are attacking Oklahoma jobs.”

And yet who is funding the secretive, non-transparent OK United and Catalyst Oklahoma and using their seemingly bottomless war chest to force their will on the people of Oklahoma? @StrongerOK doesn’t offer any answers.

But Red Dirt Report and OkieLeaks will continue to dig for you – the reader.

Previous Article
EU elections 2014: ‘I Can Hear the Boots of the 1930s Marching Through Europe’ (Telegraph)
Next Article
Secret Agencies, Media and the National Interest