The man charged in the murder of three people outside the Jewish Community Center and Village Shalom assisted-living community in Overland Park, Kan., was once considered the most prominent neo-Nazi leader in North Carolina and operated a paramilitary camp in Johnston County.

On Sunday, the eve of Passover, 73-year-old F. Glenn Miller allegedly shot dead three people, including a 14-year-old Eagle Scout, then shouted "Heil Hitler" from the back seat of a police car following his arrest. His arrest in connection with the shootings constitutes a shocking—but not altogether surprising—end to a decades-long tale of hate whose origins can be traced back to this area.

Mab Segrest tracked Miller—who also goes by Frazier Glenn Cross—and his North Carolina-based hate groups in the 1980s when she worked as coordinator for the now-defunct North Carolinians Against Racist and Religious Violence.

"He was the main neo-Nazi leader in the state, and he was the most visible one," Segrest says.

Segrest, now a professor of gender and women's studies at Connecticut College, says she always thought some of Miller's neo-Nazi comrades in the 1980s were "stone-cold killers," but she "never had the sense he was a shooter himself."

Still, Miller had at least some indirect ties to violent acts prior to Sunday's shootings. In his self-published online memoir, Miller claims to have been "caught in the middle" of the gunfire at the 1979 anti-Klan demonstration in Greensboro where white supremacists shot and killed five marchers.

Miller and other White Patriot Party members were also implicated in the execution-style murder of three people in a Shelby adult bookstore in 1987. By that time, Miller had turned informant as part of a plea deal and testified against two of his closest lieutenants who were charged in the bookstore case. The suspects were acquitted.

Segrest, who followed the trial, believes Miller or his inner group were involved in the murders, which she says were motivated by anti-gay hate.

Miller was forced out of the Army in 1979 because of his racist and anti-Semitic activities after 20 years of active duty, according to the Southern Poverty Law Center, which tracks hate groups across the country. 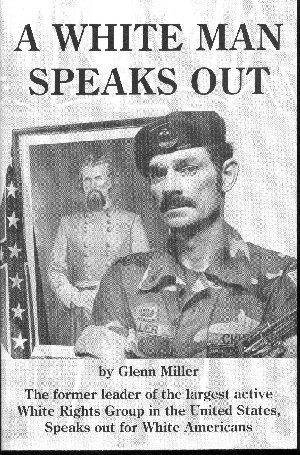 He settled on a 25-acre farm in western Johnston County near the Harnett County line and went on to lead both the Carolina Knights of the Ku Klux Klan and the White Patriot Party in the 1980s. Both organizations, say the SPLC, operated as paramilitary organizations.

In her book Memoir of a Race Traitor, published in 1994, Segrest details her efforts tracking the activities of Miller and his hate groups. She writes that Miller fused "old-style Klan and new neo-Nazi ideologies" while implementing a "double strategy: working above ground to build a mass white movement, and underground to build a paramilitary army."

Wingate Lassiter, editor of The Smithfield Herald in the 1970s and 1980s, recalls Miller's emergence in Johnston County. His paper first reported on Miller in November 1979, identifying him as a new neo-Nazi leader. Miller's vitriol "was all anti-Semitic stuff in the beginning," Lassiter says. "And I guess that adds up to what he was doing [in Kansas]."

"They were all about being paramilitary, and it was Nazi to begin with," Lassiter says. "It was really unusual, especially with all the World War II veterans we had around here. I remember people saying, 'That isn't going to last long.'"

Although Johnston County had a reputation for being a hotbed of Klan activity (in part because of a notorious "Welcome to Klan Country" sign that was posted until the mid-1970s at Smithfield town limits on the well-traveled U.S. 70), Miller was not a product of the historical Johnston Klan, Lassiter says.

"He wasn't indigenous to the Johnston County Klan group," the former editor says. "He came after the traditional Klan in this county had faded. He was somebody new on the scene."

Miller made little effort to hide the paramilitary aspect of his activities. In addition to having his followers march in public demonstrations in military fatigues (with faces uncovered, in contrast to traditional Klan marchers), he was fairly open with the local media. One of Lassiter's reporters was even allowed to visit Miller's farm to report on the paramilitary training occurring on the property.

In April 1987, Miller issued a "declaration of war" on behalf of his White Patriot Party, putting forth a "point system" for the murder of various types of people. It included 1 point for African-Americans, 10 points for Jews, 25 points for "influential Jews" and 888 points for SPLC co-founder and chief trial attorney Morris Dees.

Although the declaration was one of his more grandiose public gestures, Miller's power and influence in the neo-Nazi movement was about to evaporate. In July 1986, Miller had been convicted on federal charges of violating a court order prohibiting him from operating a paramilitary organization. He fled while out on bond awaiting an appeal but was captured in Missouri with four of his lieutenants and a stockpile of military-style weapons.

Miller agreed to a plea deal on a weapons charge and to mailing a threatening communication (his declaration of war). In exchange for a five-year prison sentence, he testified against several white supremacists, including the two men charged in the Shelby bookstore murders. He served three years of his sentence and eventually resettled in his native Missouri, having become a pariah in the neo-Nazi movement for turning snitch.

In recent years, Miller has maintained an online presence, disseminating bigoted commentaries on both his own website and Vanguard News Network.

Although Miller's influence has waned, many others seek to follow in his footsteps, Segrest says: "There's a lot more of these guys out there."

Rick Mercier is the former editor of The Clayton News-Star.