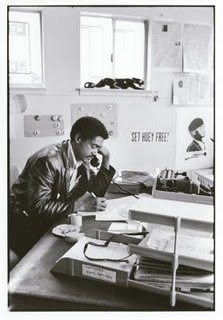 IT WAS the summer of 1968. Oakland was the epicenter of the Black Panther Party movement, and its members were fighting for the release of party co-founder Huey P. Newton, jailed after being accused of shooting an Oakland police officer to death.

His photos, and Moore’s story, were never published by Life.

This month, California-based AMMO Books is releasing Bingham’s unpublished work in a stunning new coffee table book, Howard L. Bingham’s Black Panthers 1968 ($44.95). The book displays not only Bingham’s photos but essays from Moore, biographies on Panther members and guest essays from curators of museums that focus on black issues.

“I think the book now really shows a history of the Panthers and what was going on at the time,” Bingham says. “And the same thing the Panthers wanted is being fought for now by other organizations. Maybe they aren’t as dramatic as the Panthers were, but they’re around.” …

“They could do nothing less than print a story chastising the Black Panthers for hating policemen so much and for hating the glorious American system and wanting to overthrow the government,” he says. Moore’s experience with the Panthers, and how it affected him as a black American, was eventually published as the definitive novel A Special Rage in 1971 and republished in 1993 as simply Rage. …