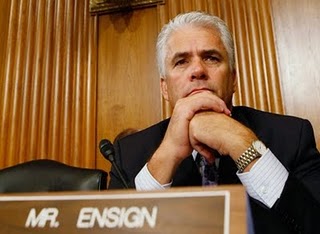 First, Michael Ensign, father of the senator and a casino industry mogul, has attracted unwanted attention over his role in a $96,000 payment to Ensign mistress Cindy Hampton and her family, and he appears to be under investigation by the Kansas lottery commission. The payments from Ensign’s parents were made to the Hamptons in the period when they were leaving the senator’s staff in early 2008.

Michael Ensign is a partner in a proposed casino project in Witchita, Kansas, and Kansas lottery officials, who will select the company that build the new casino, told the the Kansas City Star that they would investigate the matter themselves. A government watchdog group has filed complaints against John Ensign with the FBI and Federal Election Commission, but it’s unclear if any probes have actually been initiated.

Second, The Las Vegas Sun on Monday released a series of July 2008 e-mails between the Hamptons and Mike and Lindsey Slanker, two top Ensign political aides. The e-mails show that senior Ensign aides knew about his affair with Cindy Hampton for almost a year before the senator publicly disclosed it.

Both Slankers worked at the National Republican Senatorial Committee during the 2007-08 cycle, when Ensign was chairman. Doug Hampton, husband of Cindy Hampton and a former top aide in Ensign’s personal office, worked for a Slanker-owned company after he left Ensign’s employ at the end of April 2008. Mike Slanker said previously that he only found out about the affair when Darlene Ensign, the senator’s wife, told him following the decision to hire Doug Hampton.