Architecture built by the Nazi’s in the early 20th century can be spotted easily for their stale, concrete structures and the massive size of each building.  There are many different reasons for visiting Europe destinations but it is interesting to travel Germany with a mindset of looking out for obvious Nazi architecture. You will find it mixed in amongst buildings that are modern and buildings that have been around for a few hundred years. While the Nazis no longer occupy these buildings, the buildings have been purchased and are used now for other purposes. This post features Zepplin Field which is located in Nuremberg, Germany. Zepplin Field is a classic case of Nazi architecture. 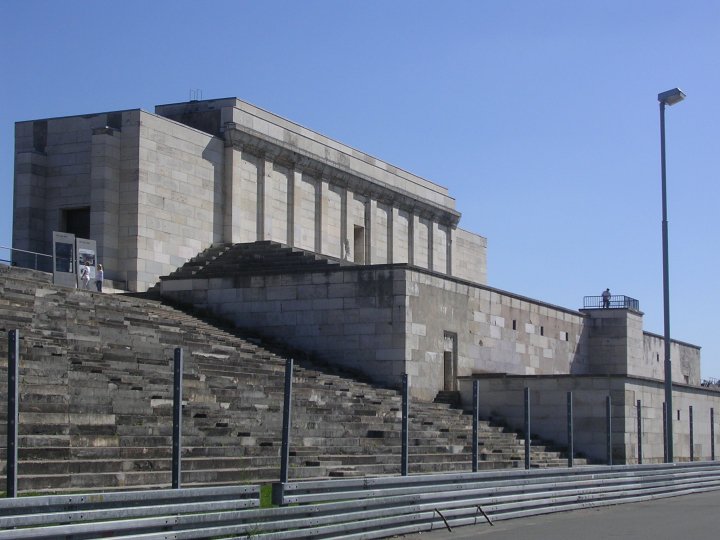 In the 1930’s, Nuremberg became the nesting ground for political hype and Nazi party rallies.  The grounds are located in the southeast area of Nuremberg and rallies were frequently held between 1933 and 1938.  Most impressive stands the former Zeppelin Field, located near the unfinished Congress Hall.  The large field has a width of 400 yards and gives off a sense of intimidating size when standing above.

The area surrounding the field provided for about 200,000 spectators, while thousands more were rallying on the field itself.  During the infamous Nazi rallies, 150 strong floodlights beamed straight up into the sky.  The building was made of concrete and brick with lime slabs covering the face of the brick.  The field was named after a landing of one of Count Zeppelin’s airships in 1909 – the naming choice made by architect, Albert Speer.

Albert Speer served as Hitler’s main architect for the Third Reich.  He was chosen by the fuehrer to specifically take the job as architect for the Nazi party.  Zeppelin Field was one of Speer’s first works created under Hitler’s direction.  Many of Speer’s works were modeled or thought after other classic works from history.  Zeppelin Field was specifically designed after the model of the ancient Pergamon Alter.

Zeppelin Field was most popular for its mass parades of the German Labor Service.  In 1935, the Third Reich created a law requiring all men between 18 and 25 years of age to do six months of service for the government.  Most of the service included cultivation work and the building of highways.  These were the men who would parade around Zeppelin Field during one of Hitler’s brainwashing rallies. 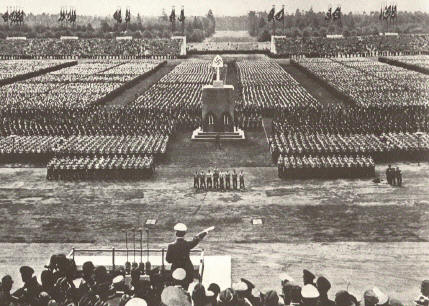 Unfortunately for Hitler, the death of the Nazi party symbolically took place at Zeppelin Field on April 22, 1945 when the US Army held a victory parade on the grandstand.  The swastika was blown up, showing the world that National Socialism had come to an end.  Ironically, the former rally grounds are still used today as both a memorial fighting against political propaganda and as a soccer field.

If you’re going to be in Nuremberg and you’d like to visit somewhere that’s a little off the beaten track, head over to Zepplin Field for a chance to stand inside of a massive stricture that symbolizes a very dark park of world history. You don’t want to miss it!