Nathan Sproul: This is What a Shell Company Looks Like 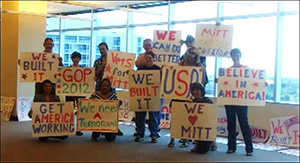 Photo: Romney Campaign Posters Being Made in Nathan Sproul Office

Since August of last year, Nathan Sproul, the man at the center of the growing voter registration fraud investigations in 11 counties in Florida, as well as other states, has registered at least 10 limited liability companies at the address of 80 E. Rio Salado Parkway, Suite 817, Tempe, Arizona.

But in this photo taken on August 21 of this year, all that we see at this address are about a dozen volunteers making signs for Presidential candidate Mitt Romney in a big open space devoid of desks or anything else looking like a business.

Various media have reported that the Romney campaign has said its relationship with Sproul ended in March of this year, but this photo was taken six weeks ago, according to the caption. Why are volunteers for Romney working out of Nathan Sproul’s office rather than out of the official Republican headquarters or Romney’s campaign headquarters?

Sproul also has an office on the same floor of the building, Suite 814. That address has been used for an array of companies tied to Republican operations in states from coast to coast. The companies thus far known are: Sproul Grassroots Mobilization, LLC, Lincoln Strategy Group, LLC, Grassroots Outreach LLC, and Strategic Allied Consulting, the firm at the center of the current storm over forged voter registrations.

Just this past Friday, as Nathan Sproul was giving an exclusive interview to Fox News saying he was out of the paid voter registration business for good, Greg Flynn at BlueNC was reporting that yet another Sproul business incarnation has sprung up – Issue Advocacy Partners, using Sproul’s address in the recruiting ads. More troubling, this firm is operating in at least five states: Iowa, New Jersey, New York, Virginia, and Wisconsin.

While the ads for Issue Advocacy Partners say they are seeking canvassers to go door to door to identify conservative voters, this ad says they also register voters. [Update: Someone killed the first link we had in the previous sentence so we have updated the link to a Google cache to forestall further tinkering.]

The Virginia Republican Party said it had dismissed Sproul’s firm, Strategic Allied Consulting, once the fraudulent registrations began to emerge in other states. The Virginia Republican Party had paid $500,000 to the Sproul firm as recently as August 1, 2012 for “new voter and absentee ballot registration” according to its filing with the Federal Election Commission. But Issue Advocacy Partners, using Sproul’s address, is now recruiting for workers in the state of Virginia. If the Virginia Republican Party is not paying Sproul – who is? According to the Washington Post, “Sproul and firms linked to him have been paid $21.2 million by the Republican Party, its candidates and affiliated interest groups over the past nine years.” The money continued to flow to the Sproul firms long after charges of fraud emerged in multiple states in 2004.

Two of the Sproul related-firms, Strategic Allied Consulting and Grassroots Outreach LLC, were registered in Virginia and California, respectively, by the same company, CT Corporation, revealing no connection to Sproul in the documents filed with the Secretary of State. CT Corporation is owned by a foreign corporation, Wolters Kluwer, based in Amsterdam with operations in 35 foreign countries. The address shown on the $500,000 check issued to Strategic Allied Consulting by the Republican Party of Virginia is the office address of the CT Corporation – 4701 Cox Rd, Suite 301, Glen Allen, Virginia.

The Republican National Committee as well as state Republican committees in Florida, Colorado, North Carolina and Virginia have all said they have dismissed Strategic Allied Consulting. But with a company that changes its name as frequently as some of us change our socks, there appears to be ample evidence that Sproul is still operating, just under a different name.

This Friday, Congressman Elijah E. Cummings, Ranking Member of the U.S. House Committee on Oversight and Government Reform, has asked Sproul to sit for an interview. In the letter requesting the interview, Cummings writes:

“Instead of the RNC [Republican National Committee] having ‘zero tolerance’ for voter registration fraud, you claimed that RNC officials asked you to form your new company, Strategic Allied Consulting, in June for the specific purpose of concealing your connections to these previous allegations. In a blunt concession, you reportedly stated that you ‘created Strategic Allied Consulting at the request of the Republican National Committee because of the bad publicity stemming from past allegations.’”

In past election cycles, members of Congress have asked the U.S. Department of Justice to investigate Sproul and his firms. The investigation went nowhere. Now the same systemic charges are back in another presidential election cycle with the involvement of a foreign corporation. It’s time to get to the bottom of this sprawling operation, its funders and its front men.

Previous Article
Delaware Democrats Respond to Gov. of Maine’s Comparison of IRS to the Gestapo
Next Article
Wackenhut Security Guard in Florida Pleads Guilty to Sexual Battery of a Minor 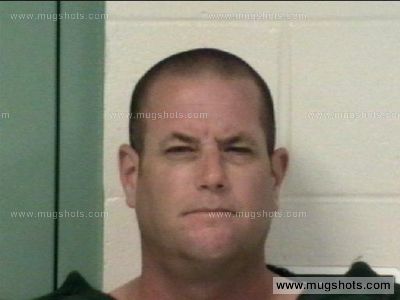