My Lai, WikiLeaks & the Pacification of Perception - The Constantine Report
0 SHARES

American Terrorism » My Lai, WikiLeaks & the Pacification of Perception

My Lai, WikiLeaks & the Pacification of Perception

"... The less information and experience that one has about their world ... the smaller and more selective reality becomes. It can even cause unreality to exist in the mind. Unreality ... leads to false beliefs and misperceptions about others and events and the world. It has also led to some of the most horrendous atrocities, mass killings, and holocaust-like events throughout history. ..."

WikiLeak reports told of collateral murders by US forces, of pregnant women and children being shot to death at checkpoints, and of thousands of unlisted civilian casualties and deaths, notes Dallas Darling. 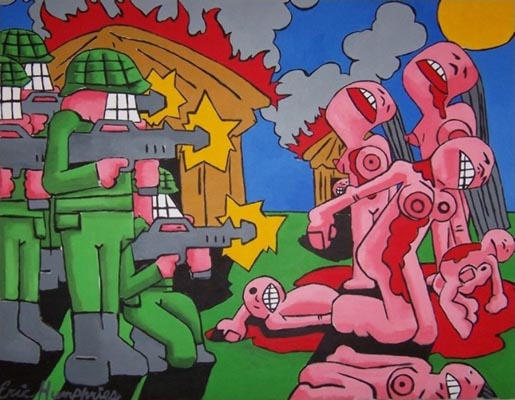 "The rampaging GI's were not interested solely in killing, although that seemed foremost in their minds. Just outside the village there was this big pile of bodies. This really tiny kid-he had only a shirt on, nothing else-he came over to this pile and held the hand of one of the dead. One of the GI's behind me dropped into a kneeling position thirty meters from this kid and killed him with a single shot. A GI grabbed this girl and with the help of others started stripping her. A soldier said, 'Let's see what she's made of. VC boom-boom.' Another soldier was telling the thirteen-year-old girl that she was a whore for the Vietcong. 'I'm horny,' said a third. As they were stripping the girl, with bodies and burning huts all around them, the girl's mother tried to help her, scratching and clawing at the soldiers." -SPS Roberts (Time Magazine-November, 1969)

The testimonies from US soldiers of the My Lai Massacre, that occurred on March 16, 1968 in Vietnam, speak for themselves. But instead of describing how a company of soldiers went into the hamlet of My Lai 4, in Quang Ngai province and brutally raped and murdered over five hundred Vietnamese women, children and elderly men, it might be more conducive at this point in the history of the American Empire to discuss the pacification of "perception" in America, especially in reference to WikiLeaks. It is well known and documented that since the end of World War II and during the Cold War, US national security and its interests have not only monopolized news and information, but it has pacified perception. By perception, I mean the ability and opportunity to acquire information and experience reality from surrounding environments or a given situation.

The public's perception, or how it observes, discerns, and then mentally interprets and judges certain events and their meaning, is really the core debate between WikiLeaks and the US Government. It is also the reason the US Government wants to extradite Julian Assange and to put him on trial for releasing information about the wars in Afghanistan and Iraq and other areas throughout the world. But the rigid control and monopolization over perception was the reason most Americans did not know that large areas in South Vietnam were declared "free fire zones," which meant that all person remaining within them-civilians, old people, children-were considered an enemy, and bombs were dropped at will.(1) It was also why Americans were unaware of "Operation Phoenix" that executed at least twenty thousand civilians in Vietnam suspected to be Communists.(2) Still, it was the reason Americans did not pay attention to "pacification programs."

Because of an extremely selective and internalized perception, no one knew-at least in America-how many hamlets in Vietnam were pacified and eradicated. (Since I served with several Vietnam veterans while in the military, they told me that there were many My Lais.) In some cases, pacification meant the complete security, or subjugation, of an area controlled and dominated by US forces and culture. This was implemented through either militarizing or policing and training local male recruits in the countryside, or through political, economic and social propaganda campaigns. It was also done through moving and resettling them into what was called "strategic hamlets." When this failed, or when the Vietnamese sought their own freedom and sovereignty, psychological warfare and even starvation and terror were used. Although some economic goods were supplied to the Vietnamese, along with schools and infirmaries and funds for local development projects, the prerequisites and goals of pacification were always security and loyalty, or allegiance to the United States and its military power.

When a member of Lieutenant Calley's-Calley was the officer in charge and one who ordered his men to massacre innocent civilians at My Lai-platoon appeared on the CBS News with Walter Cronkite and explained that Charlie Company lined up hundreds of old men, women, children, and babies in a drainage ditch and massacred them with bayonets, bullets, and grenades, a not-so stunned American public had this to say about the shocking report: "It was good. What do they give soldiers bullets for-to put in their pockets?"; It sounds terrible to so we ought to kill kids, but many of our boys being killed over there are just kids, too."; and, "I don't believe it actually happened. The story was planted by Vietcong sympathizers."(2) Meanwhile, newspapers that publish the stories and photos are threatened with boycotts, while others complain that the photos of the murdered Vietnamese women and children were obscene because the dead victims were unclothed.(3)

What is also troublesome is that when Lt. Calley was found guilty in connection with the My Lai Massacre and for murdering 109 civilians and was given a life sentence, 79 percent of Americas disagreed with the verdict and sentence. Over 50 percent agreed with the question that President Richard Nixon should free Lt. Calley. Indiana's governor asked all state flags to be flown at half-staff on behalf of Lt. Calley. While several state legislatures requested clemency for Lt. Calley, Alabama's Governor George Wallace visited him and declared President Nixon should grant him a full pardon.(4) After only serving three months in the stockade, President Richard Nixon freed him and ordered him confined to quarters pending review of the case. In 1974, a federal court judge ruled that Calley was convicted unjustly, citing "prejudicial publicity." Calley was paroled for good behavior after serving 40 months, most of them in the relative comfort of his own quarters.(5) issued a pardon. In 1971, a song was penned in honor of Lt. Calley, called The Battle Hymn of Lt. Calley.

The less information and experience that one has about their world, and when one is uniformed and unaware or others and their environment; the smaller and more selective reality becomes (and the "self'"). It can even cause unreality to exist in the mind. Unreality, or something that is not true and genuine but is instead false and does not conform or accept facts and certainties, leads to false beliefs and misperceptions about others and events and the world. It has also led to some of the most horrendous atrocities, mass killings, and holocaust-like events throughout history. Just as worse, this kind of "pacification of perception" destroys the ability to reason and to consider and evoke and live the principles of life, liberty, equality, happiness, and the ability to further human and civil rights and justice. The pacification of perception steals the humanness of others. Like one soldier exclaimed who participated in the rape and killing of women and children at My Lai, "We didn't think they were human." This is what My Lai exposed about America's collective perception, and it is what WikiLeaks is revealing.

After the initial WikiLeak reports that told of collateral murders by US forces, of pregnant women and children being shot to death at checkpoints, and of thousands of unlisted civilian casualties and deaths; and after WikiLeaks made known how the US formed assassination and death squads, how it either ignored or supported torture and killed journalists, how it instigated foreign military coups leading to the death of thousands, and how politicians and a president were lying about the ongoing conflicts in Afghanistan and Yemen; the American public responded by saying: "Isn't WikLeaks a terrorist organization? At least that is what I hear."; "WikiLeaks should be nuked!"; "Isn't that Assange guy wanted for rape?"; "WikiLeaks is endangering our troops who are doing a great job over there."; "Wiki who?"; and, "Who cares? Nothings ever going to change. There's always going to be wars."(6) And like the polling data after Lt. Calley was found guilty for murdering 109 innocent civilians, the majority of Americans believe WikiLeaks should be censored and suppressed.

What was/is really on trial was/is not only Lt. Calley for murdering innocent women and children, or WikiLeaks and if it should have released evidence of what most of the world perceives as crimes against peace and humanity; but America's perception and how it had/has been pacified. Like My Lai, there is no need for the US Government and US Military to conceal or cover-up its atrocities, because many Americans already hold extremely selective perceptions and have internalized misperceptions. Such misperceptions have been secured by militarizing and policing and training the mind. These strategically isolated "mental hamlets" exist and thrive and are reinforced through carefully crafted political, economic and social propaganda campaigns. When some citizens attempt to question and pursue their own freedom to think and to be sovereignty, they are censored, imprisoned and tormented by a non-perceptive system. This kind of psychological warfare and mental imprisonment are prerequisites and goals for the pacification of perception. These goals always consist of security, loyalty and allegiance to the State and to its corporations and military forces.

Bertrand Russell, who was a social critic and philosopher and during a mock trial found the United States guilty of numerous war crimes in its quest to dominate Vietnam, concluded that perception was a scientific problem, or, rather, no longer philosophical.(7) The My Lai Massacre (and trials that followed) and WikiLeaks were/are in nature scientific. This is why they were/are a threat and suppressed. Unlike America's perception of itself and the world, their facts cannot be falsified. SPS Roberts continued: "Another Vietnamese woman, afraid for her own safety, tried to stop the woman from objecting. One soldier kicked the mother, and another slapped her up a bit. Haeberle (the photographer) jumped in to take a picture of the group of women. The picture shows the thirteen-year-old girl hiding behind her mother, trying to button the top of her pyjamas. When they noticed Ron, they left off and turned away as if everything was normal. Then a soldier asked, 'Well, what'll we do with'em?' 'Kill'em.' another answered. I heard an M60 go off, a light machine-gun, and when we turned all of them and the kids with them were dead." From My Lai to WikiLeaks, America's individualistic and nationalistic perceptions of the world and humanity has always been one of turning away, as if everything was normal. But was/is it?

Dallas Darling is the author of Politics 501: An A-Z Reading on Conscientious Political Thought and Action, Some Nations Above God: 52 Weekly Reflections On Modern-Day Imperialism, Militarism, And Consumerism in the Context of John's Apocalyptic Vision, and The Other Side Of Christianity: Reflections on Faith, Politics, Spirituality, History, and Peace. He is a correspondent for www.worldnews.com. You can read more of Dallas' writings at www.worldnews.com. and www.wn.com//dallasdarling.

The Dark Side of Colin Powell (1995 Veteran Dispatch Article)