L.A. Sheriff’s Dept. Refuses To Give Up Records In 40-Year-Old Case Of Journalist Ruben Salazar, Killed By A Deputy - The Constantine Report
0 SHARES

American Terrorism » L.A. Sheriff’s Dept. Refuses To Give Up Records In 40-Year-Old Case Of Journalist Ruben Salazar, Killed By A Deputy

L.A. Sheriff’s Dept. Refuses To Give Up Records In 40-Year-Old Case Of Journalist Ruben Salazar, Killed By A Deputy 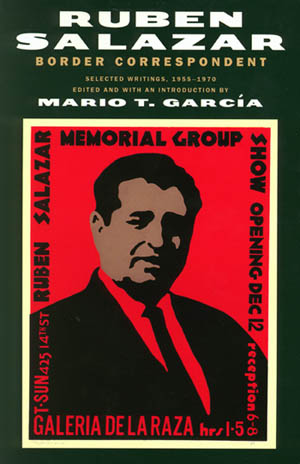 The Los Angeles County Sheriff's Department is refusing to release eight boxes of records that could shed light on the death of Mexican American journalist Ruben Salazar,, who was felled by a deputy's projectile 40 years ago. The records are older than the famous "Watergate tapes," but the department, through spokesman Steve Whitmore, argued that releasing the records would set a bad legal precedent and that it would take too much manpower to go through all the documents.

The response came after the Los Angeles Times filed a California Public Records Act request identifying the information as belonging to the public.

Salazar, a former Times columnist and KMEX-TV news director, was seen as a rare mainstream journalist at the time who gave a voice to the Chicano movement. He was killed in an East Los Angeles bar by a deputy's projectile on Aug. 29, 1970 as an anti-Vietnam War rally he had been covering raged on the street.

Similar requests for information to the FBI and Los Angeles Police Department were met with documents that revealed that authorities had been monitoring his activities, according to the Times [See excerpt below].

His death was officially ruled an accident, but some aren't satisfied with that conclusion -- not as long as the sheriff's department holds out on information it possesses.

Salazar inspired the creation of the first Latino journalism group in the nation, CCNMA: Latino Journalists of California, which also gave rise to the National Association of Hispanic Journalists. He has been honored with a U.S. stamp, and his name graces schools, libraries and scholarships.

Excerpt from the LA Times Story re Surveillance of Ruben Salazar

... The documents identified in response to The Times' request include investigative reports and other files on the journalist, according to [Sheriff Lee] Baca spokesman Steve Whitmore.

He said Baca "has nothing to hide" regarding Salazar's slaying but was not releasing the documents because to do so could set a bad legal precedent regarding law enforcement records that are generally confidential.The budget-strapped department is also unable to devote personnel to review the voluminous files to determine what might be releasable, according to Whitmore. "It's extraordinarily labor-intensive," he said.

Other law enforcement agencies, including the FBI and the Los Angeles Police Department, have previously released records to The Times regarding Salazar.

Those documents showed that authorities monitored Salazar's activities and reporting during his time as a foreign correspondent for The Times in Vietnam and Latin America and through his final days as a columnist and TV news director covering alleged police brutality and civil unrest in the Mexican American community on Los Angeles' Eastside.

The records also show that an informant inside The Times passed information to the LAPD describing Salazar as a "slanted, left-wing-oriented reporter." ...