" ... At a preliminary hearing on October 31, a large turnout of Native  supporters lined the halls of the courthouse and protested outside to demand  justice for Dawson, who has become a symbol in the Fresno Native community of  the long history of violent crimes perpetrated against people of color. ... 'The Justice for Patty Dawson Committee learned that the owner of the vehicle  Dawson was driving has KKK tattoos on his back,' said Gloria Hernandez, a local  activist and police watchdog who is helping to mobilize support for Dawson. ... " 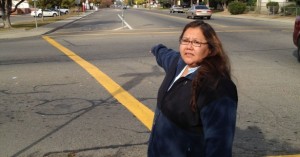 [UPDATED, JANUARY 20, LINK ADDED TO ORIGINAL STORY IN FIRST GRAPH AND  VIDEO ADDED AT END] FRESNO, Calif. – Despite two preliminary hearings,  Fresno District Attorney Elizabeth Egan has not yet included hate crimes in the  felonious assault case against Jennifer Davette Fraser, who attacked and beat  Patty Dawson, a Navajo and Apache nurse, on a city street in Clovis last June, then fled the scene of the  crime.

After considerable pressure from local activists, the Fresno County Sheriff  finally arrested Fraser, 27, in September – four months after the attack – though witnesses had given police a license plate number the day of the  assault.

Fraser was charged with felonious assault, defined under California law as “an attack on another individual in which the attacker uses a dangerous weapon  and seeks to cause serious harm but stops short of an attempt to kill the  victim.” Her two male accomplices have not been arrested and police have not  released their names.

At a preliminary hearing on October 31, a large turnout of Native  supporters lined the halls of the courthouse and protested outside to demand  justice for Dawson, who has become a symbol in the Fresno Native community of  the long history of violent crimes perpetrated against people of color.

It is well known locally that numerous white supremacists movements have been  active in Fresno and the adjacent town of Clovis since the 1980s including  the Ku Klux Klan, Aryan Nations, Aryan Terror Brigade, Bay Area National  Anarchists and Blood and Honour America Division, among others.

California is home to 68 active hate groups, more than another other state,  according to the Southern Poverty Law Center’s recent report, The Year in Hate & Extremism.

“The Justice for Patty Dawson Committee learned that the owner of the vehicle  Dawson was driving has KKK tattoos on his back,” said Gloria Hernandez, a local  activist and police watchdog who is helping to mobilize support for Dawson. “We  demand that the Fresno County District Attorney punish all the parties  responsible for this crime and treat them like gang members. Kidnapping charges  should be added for pulling Dawson out of her vehicle.

Hernandez said there are many active white hate groups in Fresno County  including the California Skin Heads, Holy Nation of Odin, the Creativity  Alliance and Vinland Folk Resistance. “We deal with their racism and violence  everyday, and we need law enforcement and the District Attorney to address this  matter immediately.”

At an October 31 preliminary hearing, Fraser’s court-appointed attorney told  the judge that Fraser should not be charged with a hate crime against Dawson  because Fraser had “recently learned she was part Native American.”

Fraser had no proof of her claim to Indian ancestry, and was given a  continuance to provide proper documentation at the next hearing.  Native  activists who filled the courtroom immediately denounced Fraser’s claim, saying  it was clearly a stall tactic to escape justice.

By the time the November 28 preliminary hearing occurred, Fraser was visibly  pregnant and told the judge that she was “having a baby that afternoon” and  needed another continuance on the case.  She did not provide proof of  Native ancestry, and was granted another continuance until January 23, 2012 in  Fresno District Court.

The Justice for Patty Dawson Committee is demanding that the U.S. Department  of Justice work aggressively to prevent hate crimes, and to prosecute and punish  the perpetrators to the full extent of the law.

“We cannot let them go unpunished and demand that the Fresno County District  Attorney punish all the parties responsible for this crime, treat them like you  would other gang members,” said Hernandez. “Kidnapping charges should be added  for pulling her out of her vehicle.”

Dawson and her family retraced the route she drove that day trying to flee  her attackers, and showed Indian Country Today Media Network the actual  site of the attack at an intersection where numerous businesses have  surveillance cameras mounted that should have captured the incident.

However, when several people from the Justice for Patty Dawson Committee  visited the businesses to inquire about footage from cameras, they were told  police had not questioned them or requested videotape.

“The police didn’t take a statement from me at the scene because I was  unconscious when they found me,” said Dawson. “Later I tried to give them a  statement and explained that I was traumatized so I couldn’t remember every  detail.  When I spoke with them, they kept asking what I did to provoke the  attack and that’s when I worried that they were not going to fully investigate  this fairly.”

Two weeks ago, Dawson, her family and Hernandez met with officials from the  Fresno District Attorney’s office and were told that police were relying on the  Fresno Sheriff’s report, Dawson’s brief statement to them, and two witnesses who  saw the attack.

However, police will not share any information about the witnesses or provide  copies of statements to Dawson. She is in the process of hiring an attorney once  adequate funds can be raised to help her file a civil case against Fraser.

“This is so unfair,” she said. “There are cameras that captured the attack  and people who saw it, but we can’t convince the DA that this was a hate crime.  They told me that since I couldn’t hear or remember what the attackers were  screaming at me when they chased me, that there is not enough evidence that this  was racially motivated.”

Meanwhile, Navajo Nation Vice President Rex Lee Jim has offered to intervene  and write a strong letter to the DA. Jim, a longtime human rights advocate who  helped negotiate the United Nations Declaration on the Rights of Indigenous  Peoples, said this type of violence is all too common in border towns  surrounding Native communities.

“One of the outcomes of these negotiations was to create the Navajo Nation  Human Rights Commission,” Jim said. “The commission is addressing Navajo race  relations with towns and cities that border the Navajo Nation, and this is a  good example of how tribes can work to reduce racism and violence against our  people.

Article 2 of the U.N. Declaration states that “Indigenous Peoples and  individuals are free and equal to all other peoples and individuals and have the  right to be free from any kind of discrimination, in the exercise of their  rights, in particular that based on their indigenous origin or identity.”

“We want our Navajo people to feel that they’re safe when they are traveling  anywhere in the world,” Jim said. “We want them to feel that the Navajo Nation  supports them. We have to take a stand against the growing racism in this  country and we support justice for Patty Dawson.”

At the next hearing on January 23, 2011, the judge will determine if the case  will go forward based on the findings of the District Attorney.

“This is not just about me,” said Dawson. “This happens to many of our people  and I feel like it’s my responsibility to speak up to stop the violence against  our women and children.”

Here Patty Dawson explains what she recalls happened when she was  attacked to ICTMN:

This article is such bullsh@# there is only one active skinhead group in fresno and a few independent s and that is califorina skinheads ca.s a family of morally working class white skinheads who stand up for fellow whites rights and to preserve the 14words hail 31

Neo-Nazis are in the Army Now