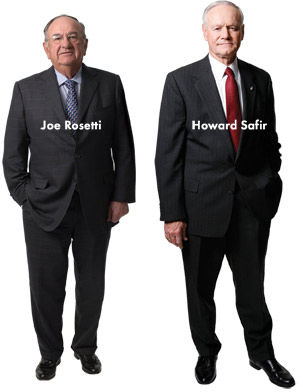 ... Joseph Rosetti, president of SafirRosetti [About SafirRosetti - "Founded in 2001, SafirRosetti is a leading security, investigative and intelligence firm. ... The company is led by former New York City Police Commissioner and New York City Fire Commissioner Howard Safir in 1999, towards the end of his tenure as Police Commissioner, Safir engineered lucrative no bid contacts for the NYPD's DNA analysis program with The Bode Technology Group Inc., a company with which he had financial ties?" ... "When Safir resigned as Police Comissioner in August 2000, he went to work for ChoicePoint Inc., which was the parent company of

The Bode Technology Group. In March 2007, GlobalOptions Group, Inc. acquired The Bode Technology Group from ChoicePoint in a cash purchase for $12.5 million. Guess who is now an executive with Global Options Group who is in charge of overseeing the Bode organization? You guessed it... Giuliani's crony, Howard Safir!" Howard Safir was appointed 39th Police Commissioner of New York City by Mayor Rudolph W. Giuliani on April 15, 1996. Mr. Safir also serves as consultant to the Chair of ChoicePoint], has become a new member of the firm Norwalk-based Splinternet Holdings Inc.'s board of advisers.

Rosetti previously was vice chairman of Kroll Associates (a subsidiary of AIG Insurance ["BEAR STEARNS, BUFFETT'S AIG & PRE-9/11 PUT OPTIONS: " ... Bear Stearns, which is now broke, was linked to [Warren Buffett's] American Insurance Group (AIG) and PRE 9/11 put options placed on the New York and Chicago financial exchanges 72 hours before the September 11th attacks. ... "
http://engforum.pravda.ru/showthread.php?p=2424547]), responsible for corporate security and crisis management. From 1971 to 1987, he had worldwide responsibility for IBM security programs and was responsible for Department of Defense Security as it related to IBM ["Based on my reading of what Framework does, it maps all of the devices, files, programs, servers, etc. on a mainframe system - giving a 'Window on the World' so to speak. In order for this program to work from a PC from an external device, it means that the software must actually be IBM software that runs at system level authority, it would have to exploit a back door in IBM's communications controllers and/or operating system - otherwise you couldn't build an enterprise architecture map and the system security would prevent you from running it without the proper authorities. Since IBM was PTECH's business partner in this, there is no doubt in my mind that PTECH was actually just front-end interface. It was a company that was set up by design to be thrown to the wolves if the scam was exposed."] He has served as an IBM security director and was a vice chairman of the Secretary of State's Overseas Security Advisory Council.

Rosetti additionally served as the northeast director for the Law Enforcement
Assistance Administration of the U.S. Department of Justice (in the 1970s, a CIA liaison and financial conduit to police departments across the country, disbanded in 1983). He also was a special agent, group supervisor and special assistant to the Assistant Commissioner for Compliance in the Intelligence Division, U.S. Treasury Department.

http://www.stamfordadvocate.com/norwalkadvocate/business/ci_10443813
•••••••
" ... Prior to joining the U.S. Government, Rosetti was Chief Accountant for Marriott. ... " (Marriott and Carlyle are interlocked: Stephen Norris - a co-founder Carlyle Group - is from Marriott, Inc. ["Mr. Norris was involved in the decision-making process in essentially every major Carlyle investment decision from its beginning as a $105 million fund. ... He was actively involved in recruiting all of Carlyle's current senior partners and played a major role in recruiting President George W. Bush to serve as a director of one of its portfolio companies and in enlisting former Secretary of State James Baker III and former Secretary of Defense Frank C. Carlucci to be senior partners of Carlyle.] So is another Carlyle co-founder, Dan D’Aniello. Then there was J. W. Marriott himself - chairman of Marriott Corp." "The influence of Marriott on Carlyle was a pervasive force, and his former employees still utter his name with the highest respect." Fred Malek, currently presidential candidate John McCain's deputy financial manager, is a former Marriott VP and Carlyle director.)
http://www.zephyrcomm.com/about-bios.htm

He was a Corporate Director of Kroll Associates Inc., Alpine Lace Inc., and GVI Security Solutions, Inc. (GVI is a division of GE.)