We’ve heard much debate over policy issues, but actual coverage of the war has been scarce, limited largely to daily reports of suicide bombings and periodic American casualty counts: 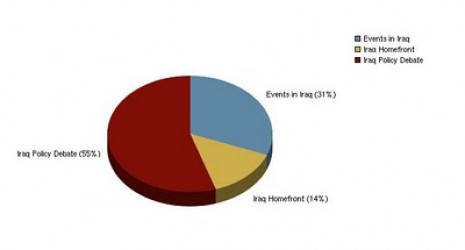 That coverage, despite the time, space and resources devoted to the topic, was rather narrowly focused. Through the first 90 days of the year, indeed, it would be fair to say that this was not coverage of the war in Iraq per se, but the fate of Americans and American policy there.

Overall, more than eight in ten stories were largely focused on Americans—either at home, in combat or through the policy debate. Fewer than one in six—or about 16% of the Iraq coverage—was focused on Iraqis.

Breaking the coverage into three different storylines—the U.S. policy debate, events inside Iraq and war-related issues back home—helps pinpoint the media’s focus. The majority of the Iraq coverage (55%), dealt with the policy debate back in Washington. Thus most of what people are seeing is not about the war itself but the argument about what to do about it.

A discussion forum to mark the fifth anniversary of the fall of Baghdad was held Thursday in London, where a number of authors and journalists discussed the role of the media in promoting the US-led invasion of Iraq.

During the public gathering, entitled ‘How the media sells war and why’, a panel of prominent media figures gave short talks on the Iraq war before answering a number of questions by a largely anti-war audience.

The discussion touched on the propaganda effect of covering the toppling of Saddam Hussein’s statute on April 9th 2003, which was transmitted by most media outlets around the world.

For a demonstration staged by merely 200 people, the incident received much exaggerated attention, noted Lindsey German, national convenor for the Stop the War Coalition.

German also cited statistics showing the number of attacks directed against US-led troops in Iraq mounted to almost three quarters of total attacks in the country, while 16% were directed against US-backed Iraqi forces, and only 10% of violent acts were of a sectarian nature.

But the media, German continued, had consistently tried to misrepresent the war as an internal conflict where foreign troops are there as peacekeepers.

On the theme of hypocrisy in mainstream media, German cited the example of repeatedly mentioning the gassing of Kurds by Saddam’s regime in the run up to the Iraq war in 2003 while the actual incident took place in the late 1980s and did not stir such Western uproar – media or political – before that.

The success (or failure) of the US troops ‘surge’ in Iraq and the current security situation were also addressed at the forum.

While there were small security gains in Baghdad attributed to the surge, the Iraqi capital has become a divided community owing to the US-imposed ‘blast walls’ that separate Sunnis from Shiites, said Kim Sengupta, defence and diplomatic correspondent for the Independent newspaper.

Sengupta cited the example of Karrada district where Iraq’s once united community of Shiites, Sunnis and Christians lived happily together are forced into separation in today’s post-invasion Iraq.

The discussions touched on the pressure honest journalists faced when trying to report with objectivity on the run up to and during the Iraq war.

While true reports could not make it to publication, many totally fictional stories began to appear in newspapers in the UK and the US regarding the events in Iraq, noted Nick Davies, an award-winning Guardian journalist and author of ‘Flat Earth News’.

Davies argued that there were two different lines used to spread disinformation through British newspapers: the first was via PR activity from Downing Street, where reporters present official comments as facts. The second was through fake reports fed to journalists by American and British intelligence agencies.

Five years since the fall of Baghdad, and ‘the context’ of the Iraq war is still missing in most mainstream coverage internationally, stressed Dahr Jamail, an independent journalist who was in Iraq and author of ‘Beyond the Green Zone’.

Jamail criticised the absence of thorough analysis of the objectives of the Iraq war in most media outlets, adding that many of the war aims were never closely guarded secrets in the first place.

Many of the plans for Iraq are even available online in American sites that clearly state the US government’s aims and strategies, said Jamail.

Jamail, who covered the battle against the city of Fallujah in 2004, said US forces had targeted Iraqi civilians, something which journalists embedded with US forces did not report.

In fact, Jamail continued, one of the conditions US commanders demanded to accept any truce with the city is for the locals to kick out Al Jazeera satellite channel, which was reporting independently in Fallujah.

Jamail also mocked the media’s announcement of small improvements in Iraq here or there while the big – yet ignored – picture shows that about 10 million Iraqis (i.e. 30% of the population) are either displaced, in urgent need of food and water, or dead as a result of the US-led invasion.

At the end of the talks given by the panel, members of the audience – which included many journalists – expressed their own opinions and concerns on the situation in Iraq and put forward queries about the way forward.

The forum was organised by Media Workers Against the War, a group of journalists and media staff campaigning against war and racism, set up in 1990 by renown journalists John Pilger and the late Paul Foot.

Mamoon Alabbasi is an editor for Middle East Online and can be reached at: mamoon@meo.tv

The Iraq War will cost $3 trillion.

Add to it that in Iraq, a country of 25 million people, there are an estimated 1 million dead, 3 million wounded and 4 million in need of emergency care. Additionally there are 3 million internally displaced Iraqis and a further 3 million refugees.

To top it all off, this could have been avoided.

Such was the dire assessment of independent journalist Dahr Jamail during his April 22 talk at Cowell College. Jamail spent eight months in Iraq working as an unembedded journalist.

Embedded journalists are reporters attached to military units in armed combat. They receive unprecedented access to battlefields, but also sign contracts with the military restricting what they can report on.

As an unembedded journalist, Jamail traveled the country without military supervision but with the increased freedom to write about whatever he encountered.

“On Sept. 6, 2002, when Bush announced that Iraq was six months away from developing nuclear weapons, the media asked for no evidence,” Jamail said. “If we had real media coverage at that time there would have been criticism. Instead we had ‘Iraq has embarked on a worldwide hunt for material for an atomic bomb.’”

Jamail, on his third visit to UCSC, spoke about his new book, “Beyond the Green Zone: Dispatches from an Unembedded Journalist in Occupied Iraq,” which challenges many of the reports by the mainstream media. The event was sponsored by Peace at the Crossroads (PAX) and the Resource Center for Nonviolence.

The lack of fact-checking and research is what posed as journalism during the lead-up to the war in Iraq, Jamail said. He emphasized the need, now more than ever, for quality reporting in what looks to be a public relations campaign for a war with Iran, and for an attentive public that is aware of suspect news.

Jamail described how the mainstream media regurgitated the statements provided by “anonymous Bush Administration officials” during the beginning stages of the Iraq war; the media failed to conduct sufficient research and investigation.

Jamail is no longer alone in the woods on these issues, as people all over the country voice their discontent. …’

Previous Article
We’re in a War – Where are the Media?
Next Article
Book Review: How Does the Religious Right Control US Media, Government Policies?

Book Review: How Does the Religious Right Control US Media, Government Policies?
May 04