Iraq Veterans Leave a Trail of Death and Heartbreak in U.S. 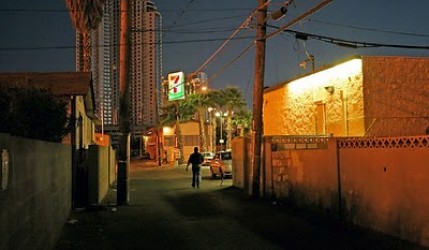 Matthew Sepi, an Iraq veteran, shot two people, one fatally, in 2005 after he was confronted in a Las Vegas alley. (Nicole Bengiveno/The New York Times)

Late one night in the summer of 2005, Matthew Sepi, 20, an Iraq combat veteran, headed out to a convenience store in the seedy Las Vegas neighborhood where he had settled after leaving the U.S. Army.

By day, the area, littered with malt liquor cans, looks depressed but not menacing. By night, it becomes, in the words of a local homicide detective, "like Falluja."

Sepi did not like to venture outside too late. But, plagued by nightmares about an Iraqi civilian killed by his unit, he said he often needed alcohol to fall asleep. And so it was that night, when, seized by a gut feeling of lurking danger, he slid a trench coat over his slight frame - and tucked an assault rifle inside it.

"Matthew knew he shouldn't be taking his AK-47 to the 7-Eleven," Detective Laura Andersen said, "but he was scared to death in that neighborhood, he was military trained and, in his mind, he needed the weapon to protect himself."

As Sepi started home, two gang members, both large and both armed, stepped out of the darkness. Sepi later said that he spied the butt of a gun, heard a boom, saw a flash and "just snapped."

In the end, one gang member lay dead, bleeding on the pavement. The other was wounded. And Sepi fled, "breaking contact" with the enemy, as he described it. With his rifle raised, he crept home, loaded 180 rounds of ammunition into his car and drove until police lights flashed behind him.

"Who did I take fire from?" he asked. The diminutive young man said he had been ambushed and then instinctively "engaged the targets."

He shook. He also cried.

"I felt very bad for him," Andersen said.

Individually, these are stories of local crimes, gut-wrenching postscripts to the war for the military men, their victims and their communities. Taken together, they paint the patchwork picture of a quiet phenomenon, tracing a cross-country trail of death and heartbreak.

The New York Times found 121 cases in which veterans of Iraq and Afghanistan committed a killing in the United States, or were charged with one, after their return from war. In many of those cases, combat trauma and the stress of deployment - along with alcohol abuse, family discord and other attendant problems - appear to have set the stage for a tragedy that was part destruction, part self-destruction.

Three-quarters of these veterans were still in the military at the time of the killing. More than half the killings involved guns, and the rest were stabbings, beatings, strangulations and bathtub drownings. Twenty-five offenders faced charges for murder, manslaughter or homicide for fatal car crashes resulting from drunken, reckless or suicidal driving.

The Pentagon does not keep track of such killings, most of which are prosecuted not by the military justice system but by civilian courts in state after state. Neither does the U.S. Justice Department.

To compile and analyze its list, The Times conducted a search of local news reports, examined police, court and military records and interviewed the defendants, their lawyers and families, the victims' families, and military and law enforcement officials.

This reporting most likely uncovered only the minimum number of such cases, given that not all killings, especially in big cities and on military bases, are reported publicly or in detail. Also, it was often not possible to determine the deployment history of other service members arrested on homicide charges.

The Times used the same methods to research homicides involving all active-duty military personnel and new veterans for the six years before and after the present wartime period began with the invasion of Afghanistan in October 2001.

This showed an 89 percent increase during the present wartime period, from 184 to 349 cases, about three-quarters of which involved Iraq and Afghanistan war veterans. The increase occurred even though there have been fewer troops stationed in the United States in the last six years and the homicide rate in America has been, on average, lower.

The Pentagon was given The Times's roster of homicides. It declined to comment because, according to a spokesman, Lieutenant Colonel Les Melnyk, the Department of Defense could not duplicate the newspaper's research. Further, Melnyk questioned the validity of comparing prewar and wartime numbers based on news media reports, saying that the current increase might be explained by "an increase in awareness of military service by reporters since 9/11." He also questioned the value of "lumping together different crimes such as involuntary manslaughter with first-degree homicide."

Given that many veterans rebound successfully from their war experiences and some flourish as a result of them, veterans groups have long deplored the attention paid to the minority of soldiers who fail to readjust to civilian life.

In some of the cases involving veterans of Iraq and Afghanistan, the fact that the suspect went to war bears no apparent relationship to the crime committed or to the prosecution and punishment. But in many of the cases, the deployment of the service member invariably becomes a factor of some sort as the legal system, families and communities grapple to make sense of the crimes.

This is especially stark where a previously law-abiding young man - there is one woman among the 121 - appears to have committed a random act of violence. And The Times's analysis showed that the overwhelming majority of these young men, unlike most civilian homicide offenders, had no criminal history.

"When they've been in combat, you have to suspect immediately that combat has had some effect, especially with people who haven't shown these tendencies in the past," said Robert Jay Lifton, a lecturer in psychiatry at Harvard Medical School/Cambridge Health Alliance who used to run "rap groups" for Vietnam veterans and fought to earn recognition for what became known as post-traumatic stress disorder, or PTSD.

Few of these 121 war veterans received more than a cursory mental health screening at the end of their deployments, according to interviews with the veterans, lawyers, relatives and prosecutors. Many displayed symptoms of combat trauma after their return, those interviews show, but they were not evaluated for or given a diagnosis of post-traumatic stress disorder until after they were arrested for homicides.

What seems clear is that experiences on the streets of Baghdad and Falluja shadowed these men back to places like Longview, Texas, and Edwardsville, Illinois.

"He came back different" is the shared refrain of the defendants' family members, who mention irritability, detachment, volatility, sleeplessness, excessive drinking or drug use, and keeping a gun at hand.

The nature of the counterinsurgency war in Iraq, where there is no traditional front line, has amplified the stresses of combat, and multiple tours of duty - a third of the troops involved in Iraq and Afghanistan have deployed more than once - ratchet up those stresses.

In earlier eras, various labels attached to the psychological injuries of war: soldier's heart, shell shock, Vietnam disorder. Today the focus is on PTSD, but military health care officials are seeing a spectrum of psychological issues, with an estimated half of the returning National Guard members, 38 percent of soldiers and 31 percent of marines reporting mental health problems, according to a Pentagon task force.

Decades of studies on the problems of Vietnam veterans have established links between combat trauma and higher rates of unemployment, homelessness, gun ownership, child abuse, domestic violence, substance abuse - and criminality. On a less scientific level, such links have long been known.

"The connection between war and crime is unfortunately very ancient," said Dr. Jonathan Shay, a psychiatrist for the Department of Veterans Affairs in Boston and the author of two books that examine combat trauma through the lens of classical texts.

Unlike it did in the Vietnam War, the current military has made a concerted effort, through screenings and research, to gauge the mental health needs of returning veterans. But gauging and addressing needs are different, and a Pentagon task force last year described the military mental health system as overburdened, "woefully" understaffed, inadequately financed and undermined by the stigma attached to PTSD.

Of the 13 combat veterans in The Times database who committed murder-suicides, only two, as best as it can be determined, had psychological problems diagnosed by the military health care system after returning from war.

"The real tragedy in these veterans' case is that, where PTSD is a factor, it is highly treatable," said Lawrence Sherman, director of the Jerry Lee Center of Criminology at the University of Pennsylvania. "And when people are exposed to serious trauma and don't get it treated, it is a serious risk factor for violence."

At various times, the question of whether the military shares some blame for these killings gets posed. In some cases, the military sent service members with pre-existing problems - known histories of mental illness, drug abuse or domestic abuse - into combat only to find those problems exacerbated by the stresses of war.

In other cases, they quickly discharged returning veterans with psychological or substance abuse problems, after which they committed homicides.

The army has recently developed a course called "Battlemind Training," intended to help soldiers make the psychological transition back into civilian society. "In combat, the enemy is the target," the course material says. "Back home, there are no enemies."

This can be a difficult lesson to learn. Many soldiers and marines find themselves at war with their spouses, their children, their fellow service members, the world at large and ultimately themselves when they come home.

"Based on my experience, most of these veterans feel just terrible that they've caused this senseless harm," Shay said. "Most veterans don't want to hurt other people."

Matthew Sepi withdrew into himself on his return from Iraq. After a year of combat, Sepi returned to Fort Carson, Colorado, where life seemed dull and regimented. The soldiers did not discuss their war experiences or their postwar emotions. Instead, they partied, Sepi said, and the drinking got him and others in trouble. Arrested for under-age driving under the influence, he was ordered to complete drug and alcohol education and counseling. Shortly after that, he decided to leave the army.

Feeling lost after his discharge "with a few little medals," he ended up moving to Las Vegas.

She found compassion for him among the law enforcement officials handling the case. The investigation backed up Sepi's story of self-defense, although it was never determined who fired first. It made an impression on the police that he was considerably outweighed - his 130 pounds against a 210-pound man and a 197-pound woman. And it helped Sepi that - according to the police - Kevin Ratcliff, 36, who was shot and wounded by Sepi, belonged to the Crips street gang and was a convicted felon; Sharon Jackson, 47, who was killed, belonged to NC, the Naked City gang, and an autopsy found alcohol, cocaine and methamphetamines in her blood.

Lemcke pressed the Department of Veterans Affairs to find treatment programs for Sepi. This allowed an unusual deal with the local district attorney's office: in exchange for the successful completion of treatment for substance abuse and PTSD, the charges against Sepi would be dropped.

Free to start life over, Sepi stepped tentatively back into society. Once in a while, he said, a loud noise still starts his heart racing and he breaks into a cold sweat, ready for action. But he knows now how to calm himself, he said, he no longer owns guns, and he is sober and sobered by what he has done.

"That night," he said, of the hot summer night in Las Vegas when he was arrested for killing, "if I could erase it, I would. Killing is part of war, but back home. . . ."