" ... If Ja- Z and Kanye have to put a warning message on their video for Paris that it might 'trigger seizures,' what else could it be triggering inside your head? Maybe they are using a Hip-Hop version of what is known in music as a 'ghost note' to deliver subliminal vibrations to your subconscious mind. Then again, maybe I’m just being paranoid. Perhaps 'Rack City' is the best rap song ever recorded? Maybe Waka Flocka Flame is the greatest lyricist of all time? Whatever helps you sleep at night, buddy. ... "

"What I’m saying might sound harsh/But we’re just walkin’ around brainwashed.” – “You Must Learn” – Boogie Down Productions 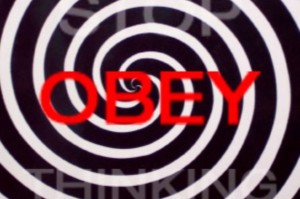 When aspiring young rapper MC Truth walked into the lobby of Makin’ Kash Ultra-Fast Records, all he could think about was how his socially-conscious lyrics were gonna change a world full of police beatings, racism, and poverty. As he sat sippin’ some purple stuff from the styrofoam cup that the flirty receptionist with the bangin’ body had handed him, he was oblivious to the fact that in the basement below the office, a team of mad scientists was conducting mind control experiments. Although he walked in as MC Truth, three months later he exited as MC Killa, gangsta rapper extroidinaire…

Through the years, “MC” has stood for many things in the Hip-Hop vernacular from “master of ceremony” to “mic control.” But, based on what is passing for “real Hip-Hop” in 2012, does MC really stand for “mind control?”

Just ask yourself, when a Lil Wayne song comes on the radio and you start bobbin’ your head hard enough to give you whiplash, is it because the music is that hot? Or are you the victim of what Professor Griff of Public Enemy calls “The Psychological Covert War on Hip-Hop”?

Over the years, various researchers have claimed that the feds have been doing psychological experiments on U.S. citizens. In his book, 63 Documents that the Government Doesn’t Want You to Read, former athlete and governor Jesse Ventura presented documents that he alleged exposed such government mind control projects that began in the early 50′s as BLUEBIRD, ARTICHOKE and MK ULTRA.

Also, Alex Constantine in his work, The Covert War Against Rock, suggested that the CIA program, Operation CHAOS, used the mind-altering drug LSD as a way to destroy the anti-Vietnam War Movement of the ’60s. It must be noted that LSD was also used by rock artists who had the potential to influence public perception of government policy during that period.

Since rap music has the potential to influence the masses politically, could similar tactics be used against the art form to neutralize political movements, today?

Remember back in April 2008, Blender Magazine claimed that Alicia Keys told them that “gangsta rap was a conspiracy to destroy Black people,” an allegation that she denied a few days later, claiming that she was misquoted.

Maybe “the Chronic, Ecstasy, and Sizzurp” are the LSD of the Era of Terror? Could that be the reason that gettin’ wasted is promoted so heavily in Hip-Hop?

The possibility is there.

According to hygenic scientist and metaphysian, Dr. Phil Valentine, author of the upcoming book, Cosmic Codex: Book of the Earth, “they studied the beats of rap to entrain the heart and brain. It’s easy to put ideas in people’s heads once you tap into the rhythm of the heartbeat.”

Historically, mind manipulation has not only been used to suppress political dissent, but to make a buck as well.

The idea that subliminal seduction could be used to hawk goods goes back to 1957 when Vance Pickard released an expose’ that “exposed the psychologically manipulative methods that marketers were bringing to advertisers,” according to Martin Lindstrom in his book, Buy-ology. Lindstrom also wrote that the man who coined the phrase “subliminal advertising” was James Vicary who, supposedly, conducted an experiment where he used a tachistoscope to place images inside of a movie, seducing people to have a sudden urge for Coke and popcorn.

However, when you start messin’ with people’s minds, the results are many times tragic.

Dominic Streatfeild in his book, Brainwash, reported that in 1986, a family sued CBS records following the suicide of their son after listening to the Judas Priest Stained Class album because, allegedly ,” the suggestive lyrics accompanied by the music’s loud repetitive beat had a hypnotic effect on susceptible individuals.” The accusation being that the suicide was a result of “hidden messages” or subliminal seduction.

During the late ’90s, Three-SixMafia, whose record label just so happened to be called Hypnotized Minds, was blamed for starting riots whenever their hit, “Tear Da Club Up” was played.

Whether these “conspiracies” are real or not is debatable, but what cannot be denied is the power that Hip-Hop has to influence behavior.

According to Steve Stoute in his book, The Tanning of America, Hip-Hop marketers used the process of “codification conveyed via a language and infrastructure built on the same pillars that create governments and religious institutions and global economies.”

Why else would Advertising Age Magazine report in a March 8, 2005, article that Mickey Dees was going to pay Hip-Hop artists to shout out the Big Mac in their songs?

Also, the question becomes if Ja- Z and Kanye have to put a warning message on their video for Paris that it might “trigger seizures,” what else could it be triggering inside your head? Maybe they are using a Hip-Hop version of what is known in music as a “ghost note” to deliver subliminal vibrations to your subconscious mind.

Then again, maybe I’m just being paranoid. Perhaps “Rack City” is the best rap song ever recorded? Maybe Waka Flocka Flame is the greatest lyricist of all time?

Whatever helps you sleep at night, buddy.

Back in 2004, Jadakiss released one of the most important songs of our time – “Why?” The song was so powerful because it made Hip-Hop question the social, political, and economic realities of society. Hip-Hop must always challenge us to never accept things at face value without investigation.

Let’s be clear. There is a battle going on for control of your mind. And you will know that you lost, the moment you stop asking “Why?”

TRUTH Minista Paul Scott’s weekly column, This Ain’t Hip Hop, is a column for intelligent Hip Hop headz. He can be reached at info@nowarningshotsfired.com. on his website NoWarningShotsFired.com, or on Twitter (@truthminista).